Tamara Espinet maintains a daunting schedule. She is a full-time lecturer in the human and evolutionary biology department at the USC Dornsife College of Letters, Arts and Sciences and a PhD student in higher education administration at the USC Rossier School of Education.

Amid the prepping and studying, she is training to become an Olympic boxer.

I don’t like the idea of anyone hitting each other. For me, boxing is about sport and strategy.

“It takes discipline, a really good work ethic and a lot of training in order to compete,” she said. “‪It requires a huge force of will to maintain the conditioning needed for boxing.”

A Rocky stereotype she’s not. Her impressive academic record includes a bachelor’s degree in kinesiology, now human biology, and a master’s in biology from USC Dornsife.

Always ebullient, Espinet never aims to hit below the belt. Boxing, she said, is not about the violence.

Shifting from research to education

“I’m actually a pacifist — maybe it’s my Canadian-ness,” the Toronto native said. “I don’t like the idea of anyone hitting each other. For me, boxing is about sport and strategy.

“There’s a lot of thinking involved,” she continued. “You have to practice moves over and over — and the more experience you have, the more quickly you learn to react. Over time, it becomes muscle memory, and you just hope that — in a fight — your body reacts in the right way.”

In her professional life, Espinet teaches about 150 undergraduate students in physiology lab courses per semester and is set to receive her EdD at the USC Rossier School of Education in 2016.   “I love teaching — although I’m in a concentration in administration,” she said. “Growing up, I hated science, but I found a love for it at USC.”

Espinet earned her master’s degree researching the relationship between hyperglycemia — high blood-glucose levels — and Type 1 diabetes.   But now she plans to transition from research to education.

“Given the weakness of the U.S. in stem fields, I hope to help improve the educational system in whatever way I can,” she said. “I struggled through science, for example, but later found that I am good at it. I want to help students gain confidence in their abilities when they’re younger.”

Espinet believes that she connects well with her students because she went through the same program.

“My professors here held me to a high standard, so I try to hold my students to the same standard,” she said. “But I’m also empathetic because I get that it can be difficult.”

She said that her students’ reactions to her “boxer alter ego” are ones of surprise and mock fear — although the subject is rarely raised.

Espinet was born in Quebec and grew up in Toronto. To compete in the 2016 Olympics in Rio, she will represent Canada.

“I’m trying to get more exposure there now,” she said. “My dream would be to go to the Olympics and get my doctorate in the same year.” 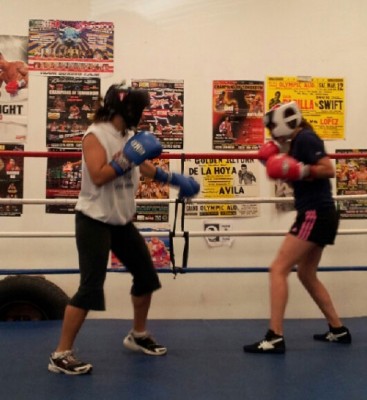 Espinet, right, spars in the ring. (Photo/courtesy of Tamara Espinet)

Espinet has trained at the Villa-Parke Boxing Program in Pasadena, Calif., for 10 years with her coach Fausto de la Torre. She described the program as enriching on a deeper level than just boxing because she has an opportunity to mentor youths.

“There are a lot of kids who train there who are not coming out of great situations,” she said.

Espinet described one particular teenager, an up-and-coming boxer who she knows is intelligent, but who often shirks his academic responsibilities. After listening to his tales of school, she understood why.

The boy told her that, on the first day of high school, his principal stood in front of everyone and said that only 2 percent of them would go to college and only 1 percent would get a job.

“Why would you tell them these disheartening statistics? You’re trying to educate them,” Espinet said. “Who can blame them for not taking their educations seriously?”

Conversely, the boxing gym offers disadvantaged teenagers a sense of community — a place in which adults show genuine interest in them and their futures, Espinet said.

“My coach touts education and encourages them to do well in school. I am proud to be a good role model and show that you can be a boxer and be educated.”

Twenty-one students at the USC Annenberg School for Communication and Journalism will work as NBC Sports interns in London and New York during the Summer Olympics.

Trojans haul away medals in swimming, track basketball, softball — you name it, it had a Trojan’s hand on it.