Tracy Fullerton, chair of the Interactive Media & Games (IMG) Division, has been named the first director of USC Games.

USC Games was established to yield innovative video game design and development.   It is a collaboration between IMG, based at the USC School of Cinematic Arts (SCA), and the Department of Computer Science at the USC Viterbi School of Engineering.

“Tracy Fullerton is the perfect choice to lead USC Games,” said SCA Dean Elizabaeth M. Daley. “She is widely considered one of the world’s most creative game designers. Her research and teaching treats game design as a collaborative endeavor that welcomes different approaches to creating games and gameplay experiences. The entire USC community will benefit from her leadership.” 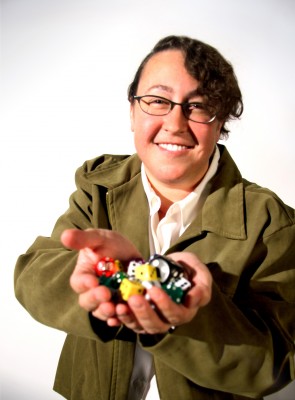 USC Viterbi Dean Yannis C. Yortsos added: “USC Games is a world-leading collaboration between Cinematic Arts and Computer Science. The program educates world-class game designers, who innovate and collaborate seamlessly across their areas of expertise. We are welcoming Tracy as the first director of USC Games and look forward to her leadership in advancing an even closer collaboration between the two schools.”

USC was ranked as the No. 1 game design school in North America this year by The Princeton Review.

“I’m very excited to take on this new challenge in advancing USC’s leadership in game education,” Fullerton said. “Our programs have set the standard in this emerging field, and now we are looking eagerly to define the next level.”

Fullerton joined the SCA faculty in 1999. In addition to serving as director of the USC Game Innovation Lab, she is an experimental game designer, entrepreneur and author of Game Design Workshop, a textbook in use around the world.

Her current projects include FutureBound, a suite of games to help middle and high school students strategize their paths to college, and Walden, a Game, which simulates an experiment in living conducted by Henry David Thoreau at Walden Pond in 1845-47.

Playing the Past: History and Nostalgia in Video Games

In the gaming world, mega-franchises dominated by high-powered weaponry and high-speed chases have long dominated the marketplace.

Students and staff members representing the Interactive Media Division (IMD) at the USC School of Cinematic Arts were recognized for pushing the paradigm of video games at the eighth annual Games for Change Festival.

An interactive project developed at the USC College Language Center allows students to travel in a virtual world while enriching their linguistic skills.