Five years ago, Anthony Hassan left a military career to become the founding director of a social work center at USC.   Today, both he and the Center for Innovation and Research on Veterans & Military Families (CIR) at the USC School of Social Work are known for their mission to help veterans make a smooth transition into their civilian communities.

In recognition of Hassan’s work over the years — especially in informing the military social work curriculum that aims to graduate students who can understand the unique challenges now facing the military community — the Iraq and Afghanistan Veterans of America (IAVA) presented him with its 2014 Civilian Service Award. 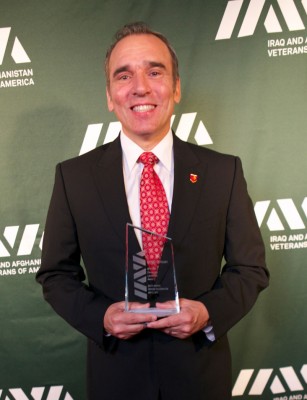 Speaking at the group’s Sixth Annual Heroes Celebration in Los Angeles, Paul Rieckhoff, IAVA CEO and founder, said that the stakes are high for a new generation of veterans, many of whom deal with myriad transitional challenges. And California, home to one in nine post-9/11 veterans, is a key place to take a stand and make a difference.

“This is where we can turn the page,” he said. “Tonight is about honoring the people who have stepped up to fight the good fight. Anthony Hassan has created a new generation of leaders that is going to be on the home front.”

A retired Air Force officer, Hassan has been instrumental in the growth of the USC military social work program and community-based research on veterans and military families. Under his tenure, the Los Angeles Veterans Collaborative has also grown to more than 250 public, private and government entities sharing best practices and working toward efficient services and programs for veterans and families. It is a model that is being replicated in other communities across the nation.

Hassan has been able to leverage his relationships with leaders within the U.S. Department of Defense, Washington, D.C., and the city of Los Angeles to position CIR as a national and international expert in military behavioral health and community capacity building.

USC focuses on a critical mission

“Anthony and his team have done an outstanding job of bringing the transitional, adjustment and employment needs of our returning veterans to the forefront of our communities,” said R. Paul Maiden, executive vice dean of academic and student affairs. “With millions of veterans who fought in Afghanistan and Iraq, this is ‘mission critical’ for USC, the School of Social Work and CIR.”

Hassan believes the greatest impact people can have on the well-being of the veteran and military community is achieved by working collectively, pulling resources and starting from the ground up.

“We can no longer depend on extraordinary leaders. We really have to depend on people like you and me and veterans in our community to make a difference,” he said.

Such a collaboration is critical now more than ever, especially with the recent spotlight on military mental health issues and different groups vying to pass the onus, according to Hassan. A growing narrative among some military circles is that mental health problems are not exclusive issues to the military, but rather larger societal issues.

“They just don’t get it. We can’t go to war for 13 years and not be affected,” Hassan said. “This is a military problem. It’s a veteran problem. It’s a community problem, and together we’re going to fix it.

“Please join me and make sure we do right by those who’ve served our country.”

Anthony Hassan, director of the Center for Innovation and Research on Veterans and Military Families at the USC School of Social Work, recently attended the Clinton Global Initiative America jobs summit, a meeting hosted by former President Bill Clinton on driving job creation and economic growth in the United States.

Hassan Confers With Military About Veterans

Anthony Hassan of the USC School of Social Work participated in the third annual Warrior Resilience Conference in Arlington, Va., on Feb. 7-8.

Hassan saluted for his work with veterans and the community