One recent Saturday, Laura Nelson ’12, a transportation reporter for the Los Angeles Times, gave a talk to local high school students about the city’s vast transit system. For a group of freshly minted drivers in a city where the unofficial motto for car dependence is “Nobody walks in L.A.,” the topic is important.

Nelson’s talk was part of The Los Angeles Service Academy (LASA), administered by the Huntington-USC Institute on California and the West (ICW), housed at the USC Dornsife College of Letters, Arts and Sciences. The program takes high school juniors on a journey through the city to meet the people who make it function.

In the program, high school students spend eight Saturdays over their junior year focusing on topics such as transit, public safety, food, housing, business and culture in Los Angeles. After each lecture, they meet with top experts in each field and visit sites throughout the city connected to the topic.

After covering the evolution of area transit in her talk, Nelson gave students a challenge. Supplied with transit passes — or TAP cards — they had to find their way from Los Angeles’ Central Library in the financial district, get lunch, then make their way to Union Station using public transportation.

Kiara Cuevas, 17, who attends Lawndale High School, was part of a group that took the subway to Little Tokyo for lunch. After studying the system map (and with some guidance from their teacher), they figured out which train to take. As the train sped along the Red Line, the students listened to the conductor to hear the announcement for their stop, so they could transfer to the Gold Line.

“It was a lot easier than I thought it would be,” Cuevas said.

Cuevas typically gets around with rides from her parents or she walks. On occasion, she will take the bus, but this was her first experience with the city’s subway. Everything was so accessible, she said. “With a day pass on the Metro, you could visit a lot of different places in one day.”

The city is more than just skyscrapers

Navigating the Metro subway system the two miles from Pershing Square to Little Tokyo to Union Station with her peers and teachers also helped widen her perspective of her hometown. Prior to the lecture, her idea of Los Angeles consisted of Dodger Stadium, L.A. Live and skyscrapers.

“I’m a born and bred Angeleno, but I didn’t know much about my city,” she said. “Now I see Los Angeles as a bigger place than I had imagined, and it’s inspired me to continue to explore my city.” 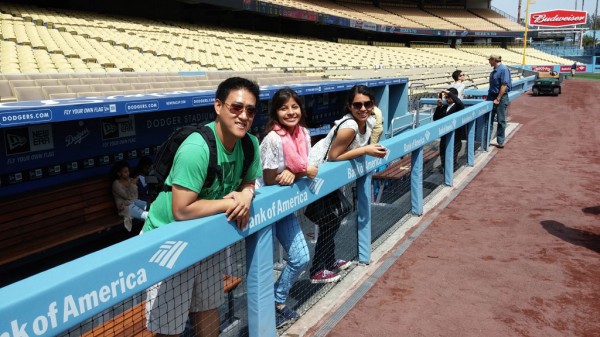 Students learn about Dodger Stadium and the history of baseball. (Photo/courtesy of LASA)

LASA is meant to introduce high school students who have expressed interest in public and civil service to the institutions and infrastructure of Los Angeles, LASA Executive Director Douglas Smith said.

“Students spend a year thinking about the question, ‘How does a large metropolitan region like Los Angeles work?’ ”

Now in its second year, the program kicks off each summer with a four-day seminar at the Huntington Library in San Marino, led by Smith and William Deverell, chair and professor of history at USC Dornsife. During this time, students get an introduction to the history of Los Angeles. LASA is supported with a grant from the WHH Foundation.

“Our goal is to pull the sinews of the city together so it’s not so anonymous and huge,” said Deverell, ICW director. “We also aim to instill in the students the notion that public service and public awareness are closely related. We really hope to inspire them.”

Lily Bataz, 15, lives in East Los Angeles and attends East Los Angeles Renaissance Academy, where her studies focus on urban planning and design. Earlier this year, she and her LASA classmates had the opportunity to meet Maria Cabildo, president of the East Los Angeles Community Corp. (ELACC) and member of the Los Angeles City Planning Commission. ELACC is a community development corporation that builds housing for local residents and helps to improve the quality of life for the community.

Cabildo provided the students with an overview of the challenges ELACC faces in the local and regional housing market and explained the arduous process of bringing a project to fruition, from identifying a site to fundraising, design and construction. To date, ELACC has built more than 1,000 units of affordable housing in the Boyle Heights neighborhood of Los Angeles.

“I could relate to her,” said Bataz, who is considering pursuing a career in urban planning or engineering. “She was raised in East Los Angeles, and so was I. She was one of the head architects on the project, which was really close to my house.”

“It was fun because we were not only able to think about housing in L.A., but we were able to see it,” Bataz said.

Students also had the opportunity to learn about business and the city’s economy, touring the Glenair plant in Glendale, which manufactures electrical connector accessories for aircraft. They learned about the history of the Los Angeles Police Department and Police Commission from Commissioner Robert Saltzman, associate dean of the USC Gould School of Law. Then they toured the police department’s downtown headquarters.

The next step: applying for college

Part of the program’s mission is to help connect students from across the L.A. basin.

“We want kids to recognize that being 16 years old in L.A., they have a lot in common regardless of what neighborhood they come from, their socioeconomic background, or their race or ethnicity,” Deverell said. “Amidst all the diversity of L.A., there’s a lot of commonality.”

The program also helps prepare the high school juniors for their next big undertaking: applying to college. A USC admissions counselor spends an afternoon with the group explaining the college admissions process. Outings also have the dual purpose of putting students in contact with those whose professions they may one day aspire to hold.

“The program is a way to introduce students as up-and-coming young citizens of the region who have a voice and need to know about the history, civics and culture of the city while learning with one another,” Deverell said.

Ulises Ali Penaloza, 18, is a senior at Montebello High School in the San Gabriel Valley. He graduated from the 2013 LASA class and was inspired by the tour of Glenair’s facilities, where he learned that companies such as Lockheed Martin and Boeing purchased Glenair Inc.’s high-speed connectors and that the Space Shuttle Discovery used their parts. After the experience, he decided to pursue a career in civil engineering and business administration. The program also instilled in him a sense of pride for his hometown and a desire to make improvements.

“I realize I am responsible, like the rest of my generation, to make the city a better, inhabitable place, friendly for both businesses and the environment,” Penaloza said.

“LASA has made me love Los Angeles.”

Parking hassles are an easy target for gripes. But the new director of transportation services is going out of his way to make the process user-friendly. Brian d’Autremont is often seen out on campus, and his hands-on approach is making a difference.

The experts appearing at a March 26 panel hosted by the USC School of Policy, Planning, and Development agreed that transportation is much more than a way to get from point A to point B.

Yin Wang, a doctoral student at the USC School of Policy, Planning, and Development, won the ninth annual paper award competition of the American Society for Public Administration’s Section on Transportation Policy and Administration.

Getting a big picture of the big city