During college, life changes can be sparked by random events: a conversation with a professor, a book recommendation, attending a play.

In the case of USC junior Brandon Chang, he pivoted to business after living with four roommates who were majoring in business and accounting.

Hearing them talk about their classes, he realized that the stereotypes portrayed in the Dilbert cartoons he read as a child were not reflective of the “rewarding, interesting field” they described. He took his first business class last spring, applied to the USC Marshall School of Business and declared a business major — along with political science — this fall. 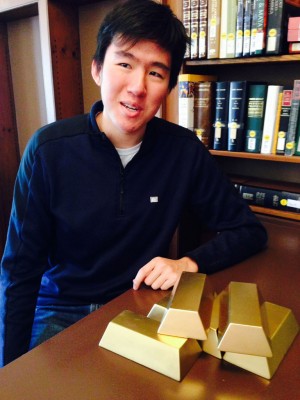 The exhibition, held in Doheny Memorial Library’s Treasure Room from September through December, commemorated the centennial anniversary of the Fed with archival photos and artifacts, books and currency (including a wheelbarrow full of shredded dollars) that gave an overview of the central bank’s history.

Chang had looked at internships with consulting firms, but was intrigued by spending a summer at the Fed. He had started the application process when he visited the exhibition.

“My interest turned to the Fed even more after I went to the exhibit and got a better perspective on what it does,” he said. “It was interesting to see how each of the 12 Fed districts are influenced by the unique economies in their areas.”

Although there is a Federal Reserve Bank in Chang’s hometown of San Francisco, he decided to apply to the Board of Governors in Washington, D.C., where he was accepted and chose to intern. Chang said he missed the East Coast, where he attended high school at Deerfield Academy in Massachusetts.  He will be working in the Fed division that deals with banking supervision and regulation.

Chang said he chose USC because he wasn’t sure what he wanted to do — his early thinking was pre-med — and he felt that the university offered a wealth of choices. “And the cultural experience of being in Los Angeles is as much a factor as the academic experience,” he said. An avid hiker and camper, he regularly backpacks at Joshua Tree.

“One of the great things about USC is the diversity of courses and the experiences,” Chang said.  “Talking to other students, you always hear about life-changing courses. You could fill four years with nothing but those courses.”

Two students and two recent graduates of the Environmental Studies Program at the USC Dornsife College of Letters, Arts and Sciences have started a trail-blazing summer as interns with the Catalina Island Conservancy, where they are spending eight weeks assisting with conservation and education programs.

The 39 students entering the graduate journalism program this year have the opportunity to select London, South Africa, Mexico and Hong Kong as project sites for next summer.

Though fall has just begun, students will have an ideal opportunity to secure a spring or summer position during Internship Week, which will kick off Oct. 3.

From the Italian Renaissance to the stars, an exciting approach to fulfilling GEs