It’s not rare to find a journalist-in-training who can talk endlessly about his niche — in Emmanuel Martinez’s case, data journalism. But Martinez, who earned his master’s in print and digital journalism from the USC Annenberg School for Communication and Journalism, has been trained in essentially all forms of journalism, from the most traditional to the most progressive, and transitions easily between them in conversation.

Beyond seeing them as separate genres of the craft, Martinez’s vision of journalism includes them all. He is interested in telling different versions of the same story in order to further our perceptions of it.

On May 16, Martinez graduated from USC Annenberg’s graduate program for print and digital journalism, the first member of his family to receive a master’s degree. His parents are from Mexico, and Martinez estimates that his father received the equivalent of an eighth grade education and his mother the equivalent of third grade. 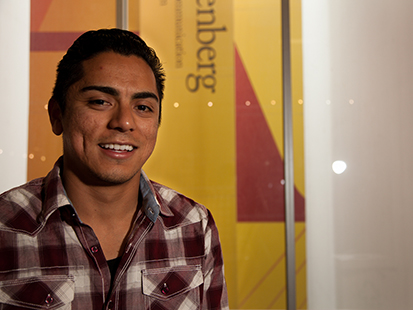 “My parents have always told me that education is the most important thing,” Martinez said. As first-generation Americans, Martinez and his siblings were the first members of his family to attend college. Martinez was raised in a town outside of Fresno, Calif., called Sanger, a rural farming area. He studied literary journalism at the University of California, Irvine, fascinated by longform radio on NPR’s This American Life and thinking he’d like to become a sportscaster on ESPN’s SportsCenter. He studied publications that put together story packages with multifaceted forms, including Sports Illustrated’s piece “The Book of Tebow.”

When he arrived at USC, he followed his interests in radio storytelling and worked for Annenberg Radio News and interned at KPCC. Meanwhile, he started familiarizing himself with media that appealed to his inherent curiosity for numbers and data. He found that he could connect his studies of data to what he was learning in classes about narrative storytelling.

This led him to USC Annenberg Professor Dana Chinn, who teaches courses in data journalism. Emmanuel quickly learned the basics of spreadsheets and data analysis on his own, and he regularly dropped by Chinn’s office to pick up packets of her class slides to read in addition to his regular course load.

“He started using what he was learning [from those slides] and applying them to his own stories he was doing in his regular reporting classes,” Chinn said.

Chinn said that Martinez’s incredible drive to learn more about analytics qualified him for an extremely competitive opportunity at Google. One of 11 students nationwide selected for the Google Journalism Fellowship, Martinez will work with some of the best analytic teams in the world during the 10-week program, advancing techniques for data mapping and analytics. Martinez will spend the first week of the fellowship at Google’s headquarters in Mountain View, Calif., then will move to the Center for Investigative Reporting for the remainder of the fellowship.

“Looking at spreadsheets and databases, mining stories from those, I started to learn how to make interactive journalism projects that combined analysis and interaction,” Martinez said. “Now that everything can be presented online, and audience is based on clicks rather than ratings, publications are figuring out how to keep readers on a web page and interactive stories are what grabs them.”

While math skills help with analytical thinking, Chinn said that the important basis for data journalists is the ability to think in a quantitative way as well as qualitative. “I think it does take a certain kind of mindset like Emmanuel’s to turn the data into a story. There’s that saying: no story without data and no data without a story.”

Award-winning reporter and USC Annenberg alum Emmanuel Martinez credits his love of math with helping him dig up stories that other journalists haven’t uncovered.

Early stints on Jeopardy! and Who Wants to Be a Millionaire fed Ken Basin’s love for Hollywood, where he now oversees business affairs for Paramount Television Studios.