The designation honors student-athletes who have at least a 3.0 grade point average and are starters or important reserves. The College Sports Information Directors of America (CoSIDA) runs the annual recognition program.

Bolonyai earned her second consecutive All-District 8 honor and was a Capital One Academic All-American first teamer last year. Scandalis, Ishimatsu and Gear are all first-time selections. All four now advance to the final round of voting by a CoSIDA committee to determine All-American distinction among all eight of the district’s 10 winners.

Ishimatsu, a 2008 Olympian, became the first woman to repeat as an NCAA platform champion since 1992-93 when she won the event at the 2014 NCAA Championships. She also earned her first All-American honors on 1-meter with a sixth-place finish and scored for the first time on 3-meter with a 13th-place finish. That followed springboard wins at the 2014 NCAA Zone E Championships and titles on 3-meter and platform at the 2014 Pac-12 Championships. Her platform title was her second straight conference crown on the board and she set a Pac-12 record in the process.

Bolonyai was USC water polo’s first Capital One Academic All-American first teamer last season, and the 2012 Olympian and 2013 NCAA champion has only improved on her GPA in her senior year. Holding a 3.50 GPA as an economics and mathematics major, Bolonyai is a repeat Mountain Pacific Sports Federation Scholar-Athlete and American Water Polo Coaches Association All-Academic nominee.

The Hungary native also now stands as USC’s all-time saves leader, having taken over that mark this season in leading the Women of Troy to another NCAA Tournament appearance. A three-time All-American, she is lined up to finish as a four-time winner to go along with her recent NCAA all-tournament second team honors. She was the 2013 NCAA tournament most valuable player as a junior after the Trojans won the 2013 national championship. 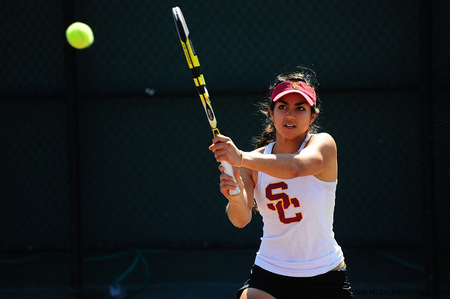 Scandalis, competing today in the NCAA Championships Round of 16 in Athens, Ga., is ranked No. 19 in the nation in singles and No. 11 in doubles and is coming off a run to the 2014 Pac-12 singles title match. An Intercollegiate Tennis Association All-American, she has a 3.87 GPA as a political economy major, was a 2013 Pac-12 All-Academic first team selection and was a winner of singles and doubles titles at the Freeman Memorial Championships. Scandalis also makes time to serve as a mentor to elementary school students at 32nd Street School near the University Park Campus.

Student-athletes representing 11 of USC’s varsity sports came together to participate in the university’s first Community Bowl on Dec. 4.

USC’s student-athletes recently turned their competitive focus to typhoon relief efforts, packing 40,000 meals to be sent to victims in the Philippines.