To compare outcomes of two common surgical procedures for children with liver complications due to Alagille syndrome, a researcher at USC and Children’s Hospital of Los Angeles (CHLA) is driving a collaboration with colleagues from 15 hospitals and research centers across the country.

Alagille syndrome is a congenital disorder that can interfere with the development of the liver’s bile ducts, preventing normal elimination of the important digestive fluid. A buildup of bile can damage the liver and cause other serious complications.

Fortunately, Alagille syndrome is uncommon, occurring once in approximately 70,000 to 100,000 births. But this rarity has also made the condition difficult to study, explained principal investigator Kasper Wang, an associate professor of surgery at the Keck School of Medicine of USC and a pediatric surgeon at CHLA.

The challenges of a rare disease 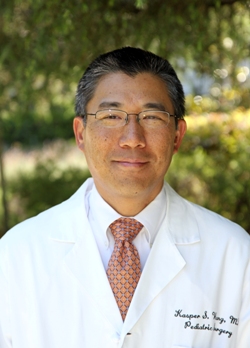 Kasper Wang, associate professor of surgery at the Keck School of Medicine of USC (Photo/courtesy of Kasper Wang)

Symptoms of Alagille syndrome include itching, also called pruritus, that can be so intense children sometimes harm themselves through aggressive scratching. Another complication is the appearance of lumps of cholesterol that appear as yellow bumps on the skin, called xanthomas. Though harmless, they can be disfiguring.

Physicians often employ one of two surgical procedures to prevent a buildup of bile in Alagille patients, but there’s no solid data suggesting which is best. “Neither procedure is new, and both are used extensively, but the two have simply never been compared in a study,” Wang said.

In one of the interventions, external biliary diversion, surgeons build a drainage system to take bile from the gall bladder, where it is stored after being produced in the liver and then routed out of the body through an opening. In the other procedure, internal ilial bypass, surgeons connect the liver to the colon via the small intestine, so bile can be eliminated through normal excretion. “Naturally, the internal bypass would seem preferable, but it’s not clear that it works as well,” Wang said.

To find enough patients to make a statistically significant comparison, Wang called on gastroenterologists and pediatric surgeons across North America.

“Since the volume of cases is low, no single institution has sufficient experience to know which approach is preferable, or under what conditions one may be better than the other,” Wang said. “A multi-center study is the only way we can gather enough data to compare the approaches.”

Collecting data from far-flung research partners is a logistical hurdle. To manage that process, Wang is using a computer informatics tool called the Research Electronic Data Capture system, or REDCap. Designed to assist cross-institutional collaborations like this one, the system enables scientists to develop databases and access the system via the internet to conduct surveys for research studies.

Promoted by the National Institutes of Health, REDCap is now used at more than 900 institutions in 74 countries. At USC and CHLA, the REDCap system is administered by the Southern California Clinical and Translational Science Institute (SC CTSI).

Once all the surgical data has been uploaded to REDCap, SC CTSI biostatistics consultant Colleen G. Azen, MS, will help Wang analyze the information.

Children with autism dread the dentist, but USC research may help

Keck Medicine of USC researchers will investigate the hypothesis that children who live near busy roadways may be exposed to air pollution that leads to obesity.

The frequency of childhood infections is a determinant of adult height, according to a new study recently conducted by a team of Keck School of Medicine of USC researchers.