Dean Croshere would call himself a fifth-generation Trojan, except that his great great grandfather attended USC in 1898 when students were known as the “Fighting Methodists.” This Friday, Croshere will become the eighth USC graduate in his family by earning his Master of Business Administration degree from the USC Marshall School of Business. 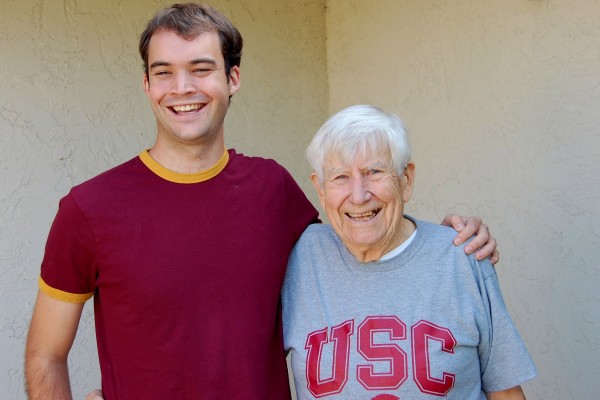 According to family lore, Croshere attended his first football game at the Los Angeles Memorial Coliseum before he was actually born. Saturdays were spent watching Trojan football from his Sebastopol, Calif., home.

“Every time ‘SC scored and Traveler shot out of the tunnel, mom would put her hand on the phone, because she knew grandpa would call,” Croshere said. “‘Fight on,’ the call would end, until the next touchdown.”

When he started considering universities, Croshere looked around — at least a little.

“I did apply to other schools, although there are a couple obvious rivals that were right off the table. I certainly had fun with the marketing materials Notre Dame sent me,” Croshere said. “Once I got my acceptance from USC, it was pretty clear this was my choice. There is something be said for tradition, and in my family, that saying is ‘Fight On!'”

Close to 4,000 parents arrived on the University Park Campus for Trojan Family Weekend and joined a sell-out crowd to see USC defeat the University of Colorado.

With a theme like “Trojan Family Values,” it’s no wonder Trojan Family Weekend drew thousands of families and friends from near and far to USC for the four-day event.