The USC team — which celebrated its 25th anniversary this year — has consistently finished in the top five in the competition since 2000. The team finished second in 2010, and last won the whole contest in 1998. 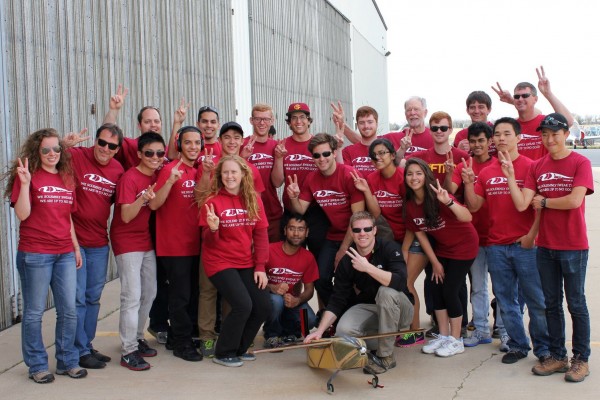 The team built nine planes before perfecting its design for the Kansas competition. “After each design iteration, changes are made to specific parts of the plane,” said faculty advisor Charles Radovich, lecturer in USC Viterbi School of Engineering’s Department of Aerospace and Mechanical Engineering.

Students constructed the fuselage mostly with Kevlar, and used carbon fiber and foam to keep the airplane light yet strong. “Our aircraft weighed only 1.88 pounds,” said Samantha Westall, aerospace engineering student and program manager for the AeroDesign Team. “We were one of the lightest and that gave us an advantage throughout all the missions.”

Radovich was quick to praise the design and construction. “The plane was a beauty and one of the best engineered aircraft the team has built,” he said.

Putting the plane to the test

A cast of students and more

The USC AeroDesign Team is among the largest design teams at USC with about 50 active members, including students from all engineering disciplines. Five faculty advisors, alumni and industry engineers support the team. The pilot for the AeroDesign Team was Wyatt Sadler, advisor to the team and a founding member 25 years ago.