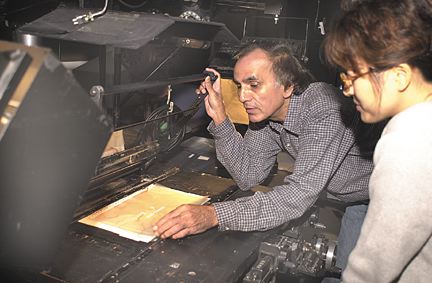 Animator Ishu Patel works with third-year MFA animation student Lee Jung Eun in the lab. Exchange between generations is important, Patel said. “It’s a good way to pass on what you know. What I like in particular are the young people and their attitudes on subjects — I’m more informed now through the students than I would be working somewhere on my own.”

Even the titles of Ishu Patel’s short animated films – “Divine Fate,” “Paradise,” “Top Priority” and “After life” – make it clear that he is not, in his own words, “typical of the industry style.”

“I’m not a cartoon person,” said the newest member of the USC School of Cinema-Television’s Division of Animation and Digital Arts. “I’m interested in supernatural matters, in deeper questions and in subtle, socially relevant messages. I have a philosophical approach, and I like experimenting with technique.”

Patel joined USC after 25 years as an experimental director/producer at the National Film Board of Canada, itself renowned for innovation. The NFB, Patel explained, was started 60 years ago “to offset Hollywood bombardment and to keep ‘Canadianness’ going. It is a film department much like the State Department; artists are hired and all the facilities provided.”

Though during his tenure at the NFB he traveled worldwide to teach, Patel is new to his profession at a university. Why enter academe? “In filmmaking, it still makes sense to have a practitioner teaching,” Patel said. “The students must make films. It’s not just talking. It’s about making.

“And exchange between generations is important. It’s a good way to pass on what you know. What I like in particular are the young people and their attitudes on subjects – I’m more informed now through the students than I would be working somewhere on my own.”

Patel first came to USC’s cinema-TV school as an adjunct faculty member in 1998. He returned as a visiting professor in 1999. He joined the ranks of tenured faculty in the fall of 2000.

He points to the intimacy of the graduate program as a big plus: The faculty is a tight-knit team, he said, and only about 15 to 20 students are admitted each year. “In professional situations, there’s no time to interact with people,” Patel said. “In the department, I know all the students personally and can spend hours with them. … It’s a small family, really, which is what I like.

“Often in a big film school, the small departments get brushed off, but here the dean has been offering animation great support.”

Dean Elizabeth Daley offers praise as well. “We are absolutely delighted to have had Ishu join us,” Daley said. “He brings enormous experience and a very fine aesthetic perspective as well as technical excellence. And he’s a terrific teacher.”

A two-time Oscar nominee and winner of the prestigious British Academy Award as well as the Berlin Film Festival’s Silver Bear Award, Patel traces his creative process to his roots.

Born in Gujarat, India, he received his bachelor’s degree in fine arts from the University of Baroda. He pursued post-graduate studies at the National Institute of Design, the Indian equivalent of the Bauhaus, traveling on a Ford Foundation grant to study graphic design at the Allegemine Gewerbschule in Basel, Switzerland. A Rockefeller Foundation scholarship brought him to the NFB.

“Although I can go out and be a Canadian, or an American, the ‘Indian’ never goes away. My films – my drawing, my style – are Indian. There’s a certain touch,” Patel said.

Patel stresses the importance of the entire filmmaking process. “My interest is in the total,” he said. “Animation is just a part of that: Making the horse jump over the fence doesn’t interest me.”

Neither is method or technology important, he said. “Every thing starts from a drawing – by hand – and only then gets translated into a sophisticated medium.”

Patel teaches students to find their own visions and what he terms “the art of the moment.”

His own moments, as often as not, start with music. “I see film as a purely visual medium,” he said. “I use very few words. Music carries my images. Single-instrument classical or folk, which fit well with mythological subjects, will often give me the structure, speed, momentum, mood that I want.”

Patel, who finds Los Angeles exhilarating and intimidating at once – “It’s a big city. It has everything, both good and bad.” – maintains residency in Montreal, returning in December and during the summer. “I don’t want to give up the social services and the civilization,” he laughed.

Patel’s daughter is studying photography at Brooks Institute of Photography in Santa Barbara. His wife, an artist and writer and frequent partner on film projects, continues to live in Canada, coming south during “hard winter.”

A Fable-Maker Joins the Animation Faculty