Louis Zamperini just turned 97. This gets him reflecting on how to live a long life.

His disarming blue eyes twinkle. For a man who has weathered so much and is still here to tell the tale, you’re inclined to lean in when he offers his wisdom.

“The secret of longevity is attitude,” he says.

He quotes the apostle Paul in Philippians 4:12-13: “I have learned the secret of being content in any and every situation, whether well-fed or hungry, whether living in plenty or in want.”

Zamperini has been in some extraordinary situations himself — enough to capture the attention of actress and filmmaker Angelina Jolie, who is directing a movie about his life.

The boy with the fast finish

Now sitting in the sunroom of his Hollywood Hills home, he looks out over a sea of palm trees, their fronds shimmering in the sunlight. The city of Los Angeles unfurls toward the horizon.

Adorning a foyer wall is a large black-and-white photograph of silent film star Theda Bara, the first occupant of the house built in 1920. The rooms are replete with photographs, medals, trophies and other memorabilia from his USC days as a sprinter and his time in the U.S. Air Force during World War II.

Born in Olean, N.Y., to Italian immigrants, Zamperini and his family soon moved to Torrance, Calif. He started out as a bit of a troublemaker, getting into fights and hopping trains to Mexico. Eventually he discovered a better outlet for his energies: running. He joined the Torrance High School track team and excelled.

In 1936, he was admitted to USC Dornsife as a physical education major on an athletic scholarship. He immediately began training for the Summer Olympics in Berlin, where he placed eighth in the 5,000-meter run. After the race, he was singled out by Adolf Hitler.

As light bulbs flashed, Hitler’s top propagandist invited the young athlete to shake hands with the Nazi leader. “Aha! The boy with the fast finish!” Hitler told Zamperini through an interpreter.

“It wasn’t until years later that I looked back and realized I’d shaken hands with the worst tyrant the world has ever known,” Zamperini reflects.

The world at war

When World War II broke out in 1939, Zamperini’s Olympic dreams were set aside.

While serving as an Air Force bombardier, his plane went down in the middle of the Pacific Ocean. He and two other survivors spent the next 47 days adrift on a lifeboat, subsisting on tiny fish, sharks, birds and rainwater. They were eventually found — but by the Japanese. Zamperini spent the next two years in prisoner-of-war camps enduring physical abuse and near-starvation.

After the U.S. government reported to his family that he was dead, Zamperini returned from the war very much alive. His service earned him three Purple Hearts, a Distinguished Flying Cross and a Prisoner of War Medal. 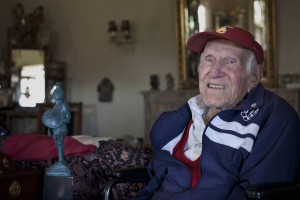 “It’s called Unbroken because I’m a stubborn Trojan,” explains Zamperini, recently named grand marshal for the 2015 Rose Parade in Pasadena, Calif. “They’d have to kill me before I’d give in.”

Jolie told Zamperini she read the book twice without stopping before deciding to make the movie for Universal. She then invited Zamperini and his family to meet her and life partner Brad Pitt in person.

“The first thing she did was hug me,” Zamperini recalls. “Then she’d say something else and hug me again. I kept looking at Brad, but he never said a word. When it was time to leave, she gave me another big hug.

In the Hollywood Hills, Jolie, Pitt and Zamperini are practically neighbors. Sometimes Jolie climbs up on her roof to wave at Zamperini, and she flies an American flag in his honor daily. They often visit each other at their respective homes, and last year, when Zamperini turned 96, Jolie and Pitt threw him a birthday party.

Zamperini’s daughter, Cynthia Garris, said her father was hired as a consultant for the film, participating in many meetings with Jolie and the writers. The film’s scope includes everything from Zamperini’s childhood to his return from the war.

“My father’s gift for detail and memory is phenomenal,” Garris says.

For the film crew, the extensive ocean and wartime aviation scenes has made for difficult shooting.

Anytime it gets tough, we think of the real men who lived through this, and no one complains.

“Anytime it gets tough, we think of the real men who lived through this, and no one complains,” Jolie told Entertainment Weekly.

Zamperini and Jolie’s friendship deepened after he heard the news about her 2013 double mastectomy. This was an elective procedure based on Jolie’s genetic predisposition for breast cancer.

As a gesture of support and recognition of her courage, the war hero presented Jolie with one of his Purple Hearts.

It moved her to tears.

This story originally appeared in the spring/summer 2014 issue of  USC Dornsife Magazine.

The longtime Trojan, a Southern Californian, has a busy winter coming up: leading the Tournament of Roses and seeing his life chronicled on screen.

The larger-than-life saga of Olympian, war hero and Trojan legend Louis Zamperini ’40 – now a published autobiography and soon to be a feature film – has it all: danger, folly, romance, courage, pathos and absolution.

A filmmaker finds her voice

Documentarian Jamari Perry discusses how she found her voice on her award-winning documentary Soaring on Invisible Wings.