Armed with constructive curiosity and professionally attired, Ali DeGuide, a sophomore majoring in political economy, attended a recent event hosted by the Department of Economics.

Held at the Radisson Hotel across from USC, the event included a panel comprising economics alumni professionals. After discussing their experiences, panelists asked the audience of mostly students for questions. 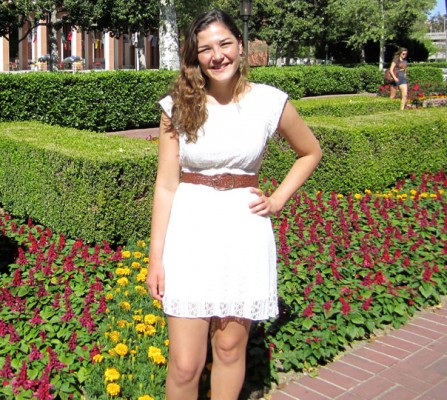 After an awkward silence, DeGuide confidently raised her hand and stood.

“I imagine myself as an economics analyst on TV, but that probably isn’t realistic, is it?” she asked the panelists, members of the Economics Leadership Council, formally launched in 2013 at the USC Dornsife College of Letters, Arts and Sciences.

That would not be an easy route, the panelists acknowledged, but they believed that DeGuide would realize her dream. Why? Because she had the nerve to stand up and ask her question when others were hesitant.

Never give up on that ambition.

“Never give up on that ambition,” said Bradford Hughes ’03, a partner at Selman Breitman LLP. “You may be among the chosen few who actually make it on TV.”

The panel discussion was one of the many ways the Department of Economics reaches out to undergraduates and graduate students to offer networking opportunities and guidance about how to use the skills they learn in the classroom to secure and succeed in jobs after graduation.

Mark Moore, director of undergraduate studies for the department, devised the idea for these new programs and welcomed the support of the council in implementing them.

In addition, this spring, the department began offering the course “Career Development for the Trained Economist” for sophomores and juniors. The course is under the auspices of USC Dornsife’s Second-Year Inquiry program, launched in 2013, which gives guidance and opportunities to middle-classmen.

Economics alumni have visited the career development class to give students insight on how to succeed.

Paul Tennen, president of Linder and Associates, a real estate property management firm, participated in the panel and spoke to students in the career development class.

“After class, a student came up to for advice,” Tennen said. “He said he had applied for internships at all the major consulting firms and hadn’t heard back. He asked me what he was doing wrong. I told him to start small; apply to some of the local firms — that they would love to have an intern. This was a new way of thinking for him.”

Another initiative this semester has been a series of nine alumni mentorship luncheons on campus. These gatherings give students the opportunity to speak informally with alumni such as Rodney Swan ’87, an entrepreneur who graduated from the Economics Honors Program with bachelor’s and master’s degrees. He now owns agriculture, real estate development and construction companies.

“Each of the students who attended wanted to do something different,” Swan recalled. “One wanted to go into public-policy, advising congressmen and senators; another wanted to be an entrepreneur; one wanted to go into law. I advised them to use their analytical and critical thinking skills from their economics education to shape their lives and careers.”

In mid-April, during another networking luncheon, junior Jake Roberts commented about why he majored in in economics.

“It makes one very polymathic,” he said. “You get to look at the economy through the lens of history, politics, philosophy, ethics and so many other subjects. I would rather garner a range of knowledge and make connections now — then specialize later.”

The Economics Leadership Council, which has about 20 members, meets regularly to brainstorm ways to best mentor students on career-targeted life skills they will need to succeed professionally.

“Now that I’ve been out of school for a while, I have a completely different perspective on how to best assess yourself and how to improve your chances of getting a job after graduation,” said Scott Sternberg ’07, president of the USC Alumni Chapter of Los Angeles. Sternberg is a litigation consultant who helps lawyers better understand math and economics for their cases.

Ryan Barner, a senior who is co-president of Omicron Delta Epsilon, USC’s chapter of the International Economics Honors Society, said she has benefited immensely from the opportunities to interact with alumni.

“I am an economics major, but I picked up a minor in business law because I saw that the USC Marshall School of Business offered mentorship and networking programs,” said Barner, who has already been offered a consulting job with Oracle Corp. for next year. “So I was very excited to see that the economics department was offering networking luncheons with alumni. It shows that the department cares about how we do after graduation. Having strong alumni connections offers me a sense of reassurance — a safety net.

“The informal luncheons have been great because they offer the opportunity to ask more personal questions,” she said. “You can ask questions about things like work and family life, and how to balance your career with other interests. These are important things that are not taught in class.”

A lesson in leadership

They have all seen homeless people, and some have even volunteered at soup kitchens or homeless shelters.

A lesson in leadership from the mayor

The 18 students in “Case Studies in Modern Leadership” sat with rapt attention listening to Los Angeles mayor Antonio Villaraigosa as he shared his philosophy for overcoming adversity – a challenge he acknowledged that every leader must face.

The USC alumnus and longtime university supporter plans to emphasize inclusion, access and connection in his new role.

Learning skills that can be used for a lifetime