Move over, technology — you’re no longer the primary driver of economic growth. It’s time to share that space with imagination and creative self-determination.

That’s the radical proposition of The Edison Project at USC, an ambitious research and education initiative that predicts that the next wave of economic growth will come from imagination and creativity more than from technology itself.

A shift from making to doing

Spurred by the global rise in ubiquitous and affordable technology, the information economy is transitioning to an “imagination economy” of participatory culture and “maker” movements. Scholars at the USC Annenberg Innovation Lab estimate that 5 billion people will be connected to the Internet over mobile devices by 2017.

The next boom will shift from “technical wonders to social wonders, [from] the construction of things to the enabling of experiences,” said Jonathan Taplin, who leads The Edison Project. He’s served since 2010 as director of the USC Annenberg Innovation Lab, a self-described “Think & Do” tank. 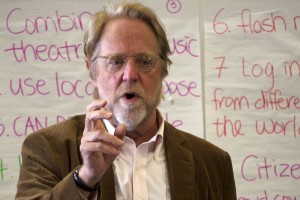 Taplin’s particular focus is the media and entertainment industry. The Hollywood blockbuster model is collapsing under skyrocketing production and marketing costs, broadcast TV is declining, and “everything from news to games to music to publishing is in the midst of a massive reinvention,” he said.

It is against this backdrop that The Edison Project will re-envision nearly every aspect of the entertainment industry within the context of Digital USC, a $1 billion, 10-year university-wide initiative for gathering, interpreting and applying digital data on a massive scale.

The Edison Project will search for new opportunities across the industry:

“The Edison Project is part of a transformation in how we see media,” Reilly said. “Technology cannot solve the next problems — it’s about creativity and human solutions. With the tools for co-designing and co-making, our imagination is sparked in helping shape the technology rather than it just being given to us.”

By identifying the imagination economy’s opportunities, The Edison Project may help accelerate its arrival. Watching from the front row will be industry sponsors of the USC Annenberg Innovation Lab, including Warner Bros, IBM, Fox Broadcasting, Cisco, DirecTV, EPB, Havas Media and BET Networks.

A landscape of interconnection

Like the USC Annenberg Innovation Lab, The Edison Project exemplifies the USC Annenberg School’s commitment to cross-disciplinary collaborations across the university, the city and the globe. Dean Ernest J. Wilson III aims to converge communications’ and journalism’s critical thinking with research in other disciplines. Partners at USC include the USC Viterbi School of Engineering, the USC Rossier School of Education and the USC Price School of Public Policy — part of a networked campus, city and extended community of scholars and innovators dedicated to solving important problems.

“Professor Taplin and the lab’s faculty, students and staff colleagues operate in what I label the ‘Third Space,’ — the intersection among communication leadership, business and engineering,” Wilson said.

Taplin is no stranger to seeing the next horizon in a changing media landscape.

Taplin joined the USC Annenberg School for Communication and Journalism in 2004 after a storied past that included serving as tour manager for Bob Dylan and the Band, producing director Martin Scorsese’s debut feature film and developing two patents for video-on-demand. Taplin even has had a career in finance, leading a series of mergers and acquisitions at Merrill Lynch in the 1980s that helped re-engineer the media landscape, including the leveraged buyout of Viacom.

Leading scholars in the field

Media and technology scholars and practitioners in The Edison Project have an impressive pedigree. Henry Jenkins, USC Provost’s Professor of Communication, Journalism, Cinematic Arts and Education and the world’s preeminent scholar of participatory culture and transmedia storytelling, and François Bar, who leads data science research at the USC Annenberg Innovation Lab, are two of its 14 leading scholars.

In addition to Reilly, a pioneer in participatory learning, social media and audience engagement, another key research fellow is USC Annenberg Innovation Lab Technical Director Geoffrey Long, who most recently served as lead narrative producer for Microsoft Studios and studies the transformation of storytelling through emerging technology.

More than 120 years after Thomas Edison introduced the possibility of moving pictures through his Kinetoscope, The Edison Project aims to find new modes of entertainment that producers and audiences do not yet realize they want.

Noted Taplin: “Thomas Edison once said, ‘I find out what the world needs, then I proceed to invent.’”

The USC Annenberg Innovation Lab – a growing powerhouse launched less than 17 months ago – hosted its first Innovation Summit at the Ronald Tutor Campus Center on March 30.

By asking players to revitalize a dying Earth, this video game aims to raise environmental awareness