A researcher in the USC School of Social Work has assembled a multidisciplinary team to study how the “built environment” of neighborhoods and surroundings influences the long-term health of homeless people who live in state and federally supplied housing.

Long-term homelessness is strongly associated with many serious chronic and acute health problems, as well as premature death, according to assistant professor Benjamin Henwood. And while getting homeless people off the streets and into permanent supportive housing is an important first step, it doesn’t necessarily result in the hoped-for improvements.

“Our health habits and behaviors are shaped by the context of the built environment we live in, including everything from grocery shopping to social interactions,” Henwood said. “To reduce the enormous health disparities among homeless people, we need to bring the entire built environment into the discussion.” 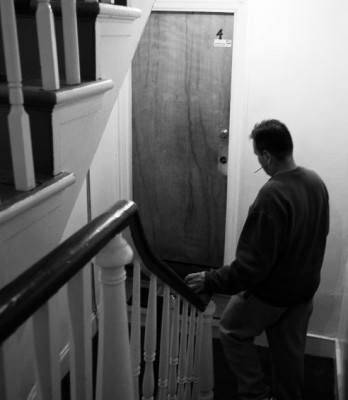 Many homeless people present a mix of health concerns, including physical infirmities and disease, addiction and mental illness. They face social challenges as well, including stigma and isolation from neighbors and a shortage of helpful relatives and friends.

“We know that these factors can make it difficult for residents of supportive housing to see doctors or other health care providers,” Henwood said. “They may also make it hard to engage in important habits like exercise, nutritious eating, maintaining social connections and other behaviors that reduce stress and boost health and well-being.”

Studying the many aspects of the built environment requires a multidisciplined approach that taps many different fields. These include public health and preventive medicine, psychology, social work, even urban planning and public policy, Henwood noted.

Last spring, Henwood also assembled a group of community partners and scholars for a colloquium to shape research questions and methodologies to study the complicated interactions between supportive housing residents and their environments.

One such methodology will involve self-reporting via mobile phones to gather data about residents of permanent supportive housing, an approach refined by Henwood collaborator Genevieve Dunton, assistant professor of research in the Department of Preventive Medicine at the Keck School.

“The CTSI team-building grant fostered a collaboration between Preventive Medicine and Social Work, which led to an exciting new project that will use real-time, data-capture strategies with mobile phones to understand how context, stress and mental health symptoms influence physical activity and other health behaviors among individuals with severe mental illness,” Dunton said. “The goal of this new grant is to uncover targets for mobile health interventions in this at-risk population.”

The team is currently conducting a CTSI-funded mHealth pilot project that will serve as the basis to pursue additional research funding.

A thousand suits to keep homeless out of the cold

The non-profit JWCH Institute honored Michael Cousineau, associate professor of Family Medicine and Preventive Medicine at the Keck School, with its Innovation Award at the annual Hand & Heart Gala on Nov. 7.