Department of Homeland Security (DHS) officials, counterterrorism leaders, current and former members of Congress, and the most famous pirate survivor of this generation gathered to help the National Center for Risk and Economic Analysis of Terrorism Events (CREATE) celebrate its 10th anniversary.

The day-long agenda on April 24 featured congratulatory remarks, panel discussions, research exhibits, descriptions of the center’s accomplishments in its first decade and analysis of the role that the center will play in the future.

CREATE was established in 2004 as the nation’s first DHS Center of Excellence, requested by Congress in the Homeland Security Act of 2002 as a response to the 9/11 attacks. USC prevailed over some 70 universities that applied to host the center, which is funded by DHS and jointly housed within the USC Price School of Public Policy and the USC Viterbi School of Engineering.

“We have come to rely on the Centers of Excellence as what we would call engines of innovation,” said Daniel Gerstein, acting under secretary for science and technology at DHS. “The centers bring the very latest in thought across many of the complex investment areas that we work in. They’re very much problem-focused and driven to transition their work to operational environments.”

Gerstein was one of many senior leaders from DHS to attend the event in the ballroom at the Ronald Tutor Campus Center, a reflection of the esteem to which CREATE is held.

“Much of the work that CREATE does is used in top-secret decision-making,” said USC President C. L. Max Nikias. “It remains completely unknown to the world at large, but the tremendous importance of its contributions and the exceptional brilliance of its researchers is certainly known to all of us here on this campus.”

Michael Chertoff, former secretary of DHS, described the four core elements that make CREATE a critical part of the DHS enterprise: first, risk-based thinking to analyze and explain how to manage risk; second, rigorous data analysis critical to intelligent decision-making and the wise allocation of resources; third, putting homeland security decision-making into the context of economic-based thinking to get maximum return in reduction of risk for reasonable value; and fourth, an interdisciplinary approach because there is no one scientific theory or discipline that covers all issues dealt with in homeland security.

“There will continue to be areas of research, development and analysis that will require cutting-edge thought and innovation if we are going to keep the country safe in what is an increasingly dangerous world, and I think this institution is going to be at the forefront,” Chertoff said.

USC Price Research Professor Adam Rose, coordinator for economics at CREATE, detailed the center’s accomplishments. Among its more than 200 homeland security research projects, perhaps the most impactful and widespread is Assistant for Randomized Monitoring Over Routes (ARMOR). Originally developed for law enforcers at Los Angeles International Airport to randomize security schedules and plans — making it difficult for adversaries to plot how to avoid security forces — customized versions were created for the Transportation Security Administration (TSA), federal air marshals, the U.S. Coast Guard and the Los Angeles Sheriffs’ Department.

Other projects include examining the impact and costs of requiring commercial aircraft to have systems to defend against shoulder-fired missiles, developing an expert elicitation tool that led to the prioritization of bioterrorism risks, and studying Customs and Border Protection, the results of which were used in congressional testimony.

“For the past decade, CREATE has done a remarkable job of conducting research on homeland security, but also turning that research into practice through projects that become actionable knowledge,” said USC Price Dean Jack H. Knott. “Its innovative tools and models inform policymaking and decision-making at all levels.”

CREATE’s work was showcased with research demonstrations set up in the ballroom. In addition to its research, the center has trained hundreds of next-generation homeland security leaders through the development of courses and certificate programs.

Getting the job done 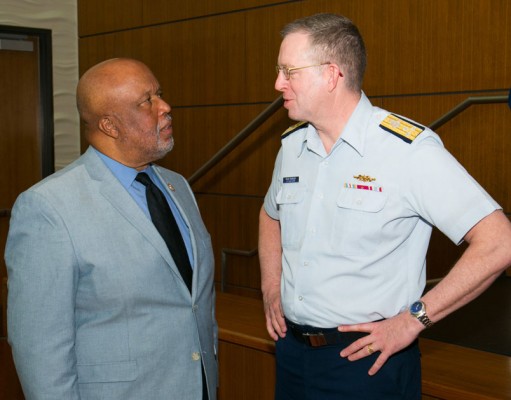 Rep. Bennie Thompson of Mississippi, ranking member for the House Committee on Homeland Security, lauded CREATE for providing a research and development system that allows DHS to get the job done better, but warned the task will become more difficult as budgetary constraints call for greater cuts to university programs.

TSA administrator John Pistole credits CREATE for its work on randomization and risk-based principals that have been incorporated into airport security, helping the TSA move away from a one-size-fits-all construct.

“This advanced technology and innovative work at Centers of Excellence such as CREATE allow us to expand the notion of risk-based security,” Pistole said.

CREATE Director Stephen Hora presented a future of the organization that will include analyzing resource allocation and the burgeoning threat of homegrown terrorism, improving responses to man-made and natural disasters, and enhancing the bridge from theory to product to practice to get applications in the hands of operating agencies. CREATE co-founders Randy Hall and Detlof von Winterfeldt also spoke at the event.

Spread throughout the day were three expert panel discussions on “The Changing Face of Terrorism,” “Advancing Homeland Security Through University Research” and “Next Generation’s Greatest Chaos.

Capt. Richard Phillips concluded the event by regaling the audience with his well-known tale of surviving Somali pirates encapsulated in Captain Phillips, in which he was portrayed by Tom Hanks.

US winning the war on terrorism but need for fight continues

Ten years after the attacks of 9/11, Californians approve of the restrictions placed on personal civil liberties and the work of the Transportation Security Administration.

Complacency poses the greatest threat to the United States a decade after 9/11, according to former Homeland Security and Counterterrorism Adviser Frances Townsend.