Ensconced in a lecture room at the University of Oxford’s Merton College, seven undergraduates from the USC Dornsife College of Letters, Arts and Sciences gazed about them at the venerable oil paintings adorning the walls.

Through the windows, they could look across the manicured green lawns of the formal college gardens to Oxford’s world-famous skyline of “dreaming spires.”

Visiting Merton, which was founded in the 13th century, the students felt as if they were absorbing centuries of intellectual thought through the college’s wood-paneled walls.

This course gave students research directions and got them excited about international law and humanitarian aid.

The reality of human conflict

The tranquil atmosphere of illustrious tradition and academic learning was in sharp contrast to the portrait being painted for them by two Oxfam aid workers speaking to the class. The aid workers described humanitarian challenges they faced while working in the war-ravaged Democratic Republic of the Congo.

“Hearing firsthand what it’s like to work in humanitarian aid was the most inspiring part of the trip for me, since you can’t get that just by reading,” said pre-med student Anshuman Siripurapu, a sophomore majoring in political economy and biological sciences who was taking “Spring Break in Oxford,” a workshop led by Lyn Boyd-Judson, director of the USC Levan Institute for Humanities and Ethics.

“It was good to hear that despite all the obstacles that humanitarian aid workers face, none had become overly cynical and they were still very much committed to their ideals,” Siripurapu said.

The Levan Institute partnered with the Oxford Institute for Ethics, Law and Armed Conflict to hold the five-day workshop at the University of Oxford in March. In preparation, students met with Boyd–Judson for weekly seminars at USC during February and March. 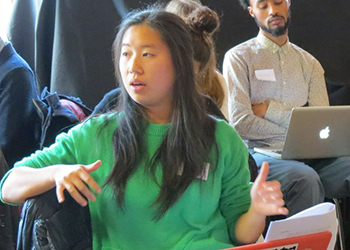 Alice Lee makes a point during a workshop session at Merton College.

Areas of study included human rights in and after conflict, humanitarian action, conflict trends, human rights law and peacemaking with a focus on recent armed conflicts.

Led by Hugo Slim of the Oxford Institute, the workshop provided a mix of seminars, working groups and student presentations. The USC students were joined by 25 additional students, plus instructors from the University of Oregon, the University of Texas and Quinnipiac University, Conn.

Siripurapu was already considering work with a humanitarian organization such as Doctors Without Borders when he signed up for the Oxford trip.

A better grasp of conflict

“I felt the conference would give me a better understanding of what that work entailed and also help me understand the larger forces that shape conflict, and how we can address conflict,” he said.

The experiences at Oxford reaffirmed his decision to work in the humanitarian sector of the global health field.

“This course gave students research directions and got them excited about a particular, tangible area in the vast fields of international law and humanitarian aid,” Boyd-Judson said.

Students heard lectures from the leaders of the International Committee of the Red Cross in London, Oxfam, the World Bank, and they watched the documentary Pray the Devil Back to Hell about Liberian women who took on warlords during a brutal civil war, winning a once unimaginable peace for their country in 2003.

Boyd-Judson said the trip had exceeded her expectations and those of the students.

As a result she plans to offer the Oxford program each spring and expand it to include graduate and PhD students.

In September, Boyd-Judson will lead a similar trip for USC students to New York to look at development issues in collaboration with the University of Oxford, the United Nations Development Programme, Quinnipiac University and Yale Law School.

Melia Albrecht, a junior majoring in international relations at USC Dornsife and public relations at the USC Annenberg School for Journalism and Communication, described herself as “an adventurer through and through.”

“I travel any chance I get, but most importantly I want to educate others about the world they live in,” said Albrecht, who is also in the honors in multimedia scholarship program at the USC School of Cinematic Arts’ Media Arts and Practice Division. “I believe that stories of people are the key to sparking change.”

The power of empathy

Albrecht, whose ambition is to be a documentary filmmaker, chose to focus on the impact internal conflict has on civilians.

“I want to humanize areas in conflict,” she said. “People’s ideas about these places and their inhabitants are shaped by the media. I want to show the other side of these nations — their beauty and stories of the people who live there, who are not part of the fighting but just caught in the middle.

“I believe strongly in the power of human empathy to move individuals to action for people they have never met and never will, and this conference reaffirmed that belief in me.”

When they weren’t attending seminars or participating in research groups, the students had the opportunity to explore Oxford. They were particularly excited about discovering the university’s historic libraries and bookshops.

“Oxford has such a rich history,” Albrecht said. “It’s a very romantic yet empowering feeling, to be where J.R.R. Tolkien, Lewis Carroll and other writers found inspiration for some of the world’s greatest literary works.

Although Siripurapu, who is from Saratoga Calif., had already visited the U.K., it was his first trip to Oxford.

‘You can feel centuries of intellectual discovery’

“It was definitely a surreal experience — you can almost feel the centuries of intellectual discovery,” he said. “When I checked into the dorm where we stayed, the welcome letter mentioned that the 17th-century philosopher Thomas Hobbes was an alumnus. That blew my mind.” 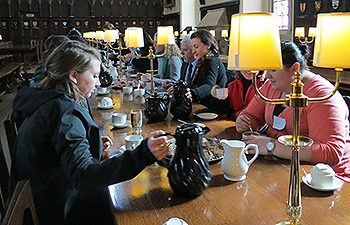 The students also learned to appreciate some great British traditions.

“After experiencing how classes pause every afternoon for tea, I am a huge proponent of bringing this custom to USC,” Albrecht said.

The trip enabled the students to create relationships they believe will last a lifetime.

“We met so many amazing people from Oxford and other universities, and our conversations didn’t stop in the classroom,” Albrecht said.

“The words shared at that conference will stay with all of us.”

As the granddaughter of Holocaust survivors, Rebecca Wertman feels a deep connection to the study of human rights policy. As a Canadian, she was proud to discover that a country famous for its hockey, snow and maple syrup initiated a foreign policy for the right of humanitarian intervention.

More than 120 USC students, faculty and staff attended a USC Gould School of Law discussion titled “Fighting Genocide Around the Globe: What Is Our Responsibility?”