How to balance growing economically with green responsibilities? Simon Levin draws from an unlikely source.

“We are faced with insurmountable opportunities,” Levin quotes Pogo, the possum in the famed comic strip.

It is with this attitude of “the bigger the obstacle, the bigger the opportunity” that Levin approaches the challenge of combating environmental degradation and working to help the world become a better place for our generation and beyond.

Levin, George M. Moffett Professor of Biology and director of the Center for BioComplexity at Princeton University, is this year’s recipient of the Tyler Prize for Environmental Achievement. A trend-setter in theoretical ecology and a MacArthur fellow, Levin applies ecological insights to problems in diverse fields — conservation biology, natural resource management, public health, financial systems and anti-terrorism efforts.

On April 24, Levin delivered a public lecture on his research at the Davidson Continuing Education Conference Center, followed by a reception at the Tyler Environmental Prize Pavilion. In a ceremony on April 25, the Tyler Prize Executive Committee and the international environmental community honored Levin at a banquet and ceremony in Beverly Hills, Calif. In addition to being presented with a gold medallion, Levin will receive a $200,000 cash prize.

Established in 1973 and administered by the USC Dornsife College of Letters, Arts and Sciences, the Tyler Prize is the premier award honoring environmental science, environmental health and energy conferring great benefit upon mankind. Jane Goodall, the world’s leading chimpanzee expert, and Werner Stumm, father of aquatic chemistry, are past laureates.

At a luncheon preceding the lecture, USC Dornsife Dean Steve A. Kay introduced Levin and acknowledged the importance of USC administering the Tyler Prize as it affords members of the university’s academic community and others the opportunity to hear annually from some of today’s most influential thinkers.

“For the rising scholars here today, I’m excited for you to have the chance to learn from someone who, truly, has proven that thinking globally and breaking down boundaries among disciplines can, and has already begun, to address some of society’s most formidable issues,” Kay said.

In Levin’s work, an underlying theme is the importance of scale in ecology and environmental science. He has bridged the gaps between the study of processes at distinct scales — those of individuals, populations, communities or ecosystems — to create an integrated view of how ecological systems work and have evolved. 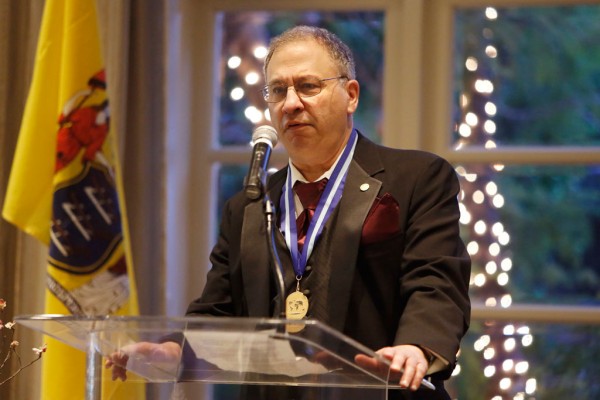 “What is so impressive about Simon Levin and his work is that he is a connector,” said Tyler Prize Executive Committee Chair Owen Lind, who introduced Levin at the lecture. “His work has bridged the theoretical with the work of ecologists in the field and connected complex ecological systems to social science and environmental and public policy. It is rare to see one expert have such a dramatic impact on so many fields.”

Charles McKenna, professor of chemistry and vice dean for natural sciences and mathematics at USC Dornsife, introduced Levin at the award ceremony.

“It is truly a privilege for the USC Dana and David Dornsife College to be associated with this prestigious award,” McKenna said. “Listening to Simon Levin speak, I am reminded of something President John F. Kennedy said long ago, which is all the more true today: ‘It is our task in our time to hand down undiminished to those who come after us the natural wealth and beauty which is our nation.’ Simon has been a brilliant leader in the attempt to understand how to meet this enduring challenge.”

Levin’s research has led the way to a deeper understanding of the interactions among groups of plants and animals living together, from their impact on the environment to the interplay of different ecosystems such as forests, oceans and tidal zones.

This research has revealed insights into evolution and the origins of biodiversity, leading to improved management of natural resources, like forests and fisheries, and broader environmental policies. Fundamentally, Levin’s work on theoretical ecology — ecology based on mathematical modeling — has helped to put environmental research into context and provides a big picture for understanding our environment.

At the lecture, Levin defined five main obstacles to environmental management. The first he called “the swamp of uniqueness,” which means the notion that every ecosystem is unique. But that doesn’t mean we can’t develop a functional taxonomy that allows generalizations, he said.

Moreover, every ecosystem management challenge is unique, but each shares certain commonalities. Drawing from his expertise as a mathematician, he believes managing ecosystems can benefit from a theoretical and conceptual framework, namely a mathematical framework.

The second obstacle he calls “the temple of the discipline,” speaking to the tendency of academia to create silos and the tendency for researchers of various disciplines not to work together to solve problems.

“We need to encourage true multidisciplinary dialogue, not just between biology and mathematics and physics and chemistry, but between the social sciences and humanities and business as well,” Levin said.

The third obstacle is the fact that ecosystems are complex systems, and there is a real challenge in relating the whole of a system to its individual parts — what Charles Darwin called “the tangled bank.” Sustainability must focus on macroscopic features, while recognizing that control of those features rests at lower levels of organization, he said.

His fourth point discussed the extent to which “the present is the enemy of the future,” which means how much value the present generation assigns to future generations. This affects the current generation’s willingness to make sacrifices now.

Levin defined the last obstacle as “ourselves, as people,” calling us the most dangerous species and a significant threat to the “common pool resources.” To illustrate this, he quoted a political cartoon: “Give a man a fish and he eats for a day, teach a man to fish and he eats for a lifetime, overfish and soon nobody eats!”

Levin also discussed complex adaptive systems, or heterogeneous collections of individual agents that interact locally and evolve as an outcome of those interactions. Citing the stock market as such a system, he drew a link between ecological and socioeconomic adaptive systems.

Common ground between economics and ecology

In 2008, following a meeting on systemic risk at the Federal Reserve Bank of New York, he and two colleagues published a paper in Nature called “Ecology for Bankers” that highlighted the significant common ground between economic and ecological systems. Observing that the current financial system had become overconnected, through sub-prime loans, for example, the authors essentially concluded that if they were in charge of managing the “ecosystem” of the financial market, they’d be worried. Six months later, the market collapsed.

Levin hopes that future research can help detect early warning indicators, which are usually present when systems are on the brink of collapse, so that we may avoid more collapses — of markets or ecosystems.

He also emphasized the fact that although scientific consensus is strong on many core environmental issues, adequate action to address problems has not been taken — and it’s not for lack of scientific knowledge.

“The primary limitations to solutions lie on the side of social sciences, on the willingness of people and governments to commit to the common good and cooperate in finding universally beneficial solutions,” he said. “I think that’s where the greatest challenge is.

An important aspect of this challenge is achieving cooperation at the global level, which relies on an understanding of different social norms and cultural values.

Levin argues that the world’s greatest need is understanding how individual and collective decisions are made. Bridges must be built from science and management to the social sciences in order to understand human decisions, while acknowledging leadership roles and collective opinion, he said.

Ultimately, he said, understanding how to achieve international cooperation is at the core of achieving sustainability in dealing with our common enemy — environmental degradation — so that we can achieve a sustainable future for our children and grandchildren.

The USC study’s findings are important because they may predict where a specific cancer may spread in the brain, and may also have implications for how brain tumors grow.