“Throughout its history, USC has relied on tried and true Trojans whose deep devotion and selfless spirit of service have benefited their beloved alma mater,” Nikias said. “Dan Epstein is an extraordinary alumnus whose hallmark is humility, whose guidance is generosity and whose creed is commitment. His impressive achievements and impeccable character make him an inspiration to the entire Trojan Family.” 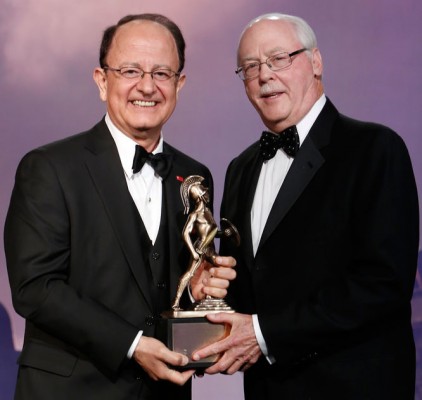 Epstein is the founder and executive chairman of the ConAm Group of Companies, one of the nation’s top privately owned apartment management/ownership firms, as well as a longtime university benefactor and alumni leader. In 2003, he provided the naming gift for the USC Viterbi School of Engineering’s Daniel J. Epstein Department of Industrial and Systems Engineering. Five years later, he contributed the lead gift for the Epstein Family Alumni Center in the Ronald Tutor Campus Center.

Alumni Merit Awards, which are given to alumni in recognition of their professional accomplishments, were presented to Ronnie Lott ’81, NFL Hall of Famer, four-time Super Bowl champion and philanthropist; Bob Osher ’81, president of Sony Pictures Digital Productions; and Gail Samuel ’88, ’89, MBA ’02, chief operating officer of the Los Angeles Philharmonic Association.

The Young Alumni Merit Award, which recognizes outstanding alumni up to the age of 35, was presented to the Honorable Aja Brown ’04, MPL ’05, the youngest candidate and the first woman elected mayor of Compton, Calif.

Alumni Service Awards recognizing volunteer efforts on behalf of the university were presented to Michael Felix ’83, a member of the USC Latino Alumni Association Corporate Council Advisory Board, the USC School of Dramatic Arts Board of Councilors and the USC Associates Board of Directors; Jana Waring Greer ’73, chair of the USC Dornsife College Board of Councilors and a member of the Widney Society, the USC Associates (chairman level) and Cardinal & Gold; and Christine Ofiesh ’74, an executive board member of Town and Gown of USC, president of the Trojan Guild of Los Angeles and a member of the USCAA Board of Governors.

Patrick E. Auerbach EdD ’08, associate senior vice president for alumni relations, and Ramona Cappello ’81, USCAA Board of Governors president, co-hosted the gala, which Auerbach described as more than just a celebration of this year’s honorees.

“It’s also a recognition of the impact USC’s loyal alumni have made, and continue to make, in fueling USC’s rise to the forefront of the world’s private research universities.”

The Trojan Family was out in force for the 77th Annual USC Alumni Awards at the Westin Bonaventure Hotel in downtown Los Angeles on April 24.

Spanning generations and transcending cultural and racial differences, the special bond between USC alumni and their alma mater was celebrated at the 79th Annual USC Alumni Awards on April 28.

Eight prominent Trojans will be honored for their achievements and contributions at the 81st Annual USC Alumni Awards.