For Senta Georgia, stem cell research offers a window into much more than the biology of pancreatic cells and diabetes.

“Molecular biology is elegant,” said Georgia, principal investigator at the Saban Research Institute of Children’s Hospital Los Angeles (CHLA) and assistant professor at the Keck School of Medicine of USC. “And what really moves me is that it’s simple, and it’s the underpinnings of how life actually works. It’s almost a spiritual insight into how life is put together, how it works.”

Georgia always wanted to be a scientist — although her initial interests were much bigger than molecules.

As the eldest of three children growing up in the army town of Pemberton, N.J., she dreamt of becoming a paleontologist and remembers building a papier-mâché dinosaur with her mother. Her aspirations shifted to archaeology after she learned about ancient Egypt.

By sixth grade, whales and marine biology captured her imagination, but she “couldn’t put that into a broader social context for curing disease or helping people,” she said. “I also figured out that I’m deathly afraid of the idea of jumping into the ocean.”

At the same time, she would spend most summers helping out with the family business, a moving company founded by her grandfather, who had a jazz club in Atlantic City. This imbued her with the entrepreneurial spirit and management savvy needed to run a lab. She cemented her work ethic during her unusual summer jobs at two theme parks.

“I was Bert and Cookie Monster at a theme park called Sesame Place, and then I was also Bugs Bunny and Wile E. Coyote at a Six Flags another summer,” she said. “At Six Flags, you’d get these rowdy — sometimes they’re drunk, sometimes they’re just testosterone-filled — boys, who want to come and wrestle with the costume characters and take pictures and pull on you. But Sesame Place — where you’re with kids, and they love you, and you just take pictures — that was great.” 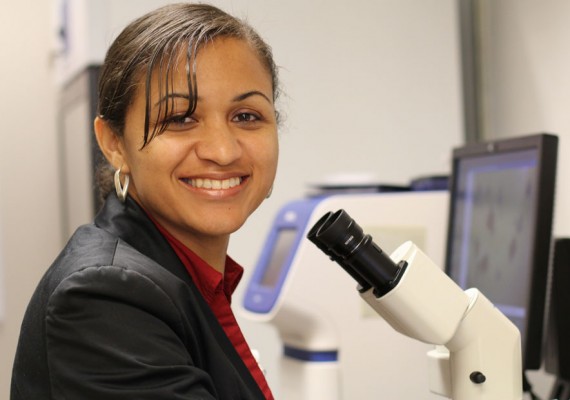 She discovered genetics when her ninth-grade class took a field trip to a company that was developing sequencing technology to advance the human genome project.

She arrived at Stanford University with the intention of studying genetics, only to discover that she found it, in her words, “really boring.” Luckily, molecular biology was a different story.

She gained valuable experience working in the labs of Stephen Houser at Temple Medical School and Daria Mochly-Rosen at Stanford University, earning her bachelor of science in biological sciences with a minor in ethics in society. As part of her minor, she explored how it would disrupt the idea of fair equality of opportunity if parents elected genetic enhancements for their children. She was one of 12 students in her graduating class to write theses and graduate with honors in two departments.

After graduation, she worked for two and a half years as a research technician in the lab of Anil Bhushan, who was studying pancreatic development at CHLA.

An insatiable curiosity for stem cells

Georgia was so captivated by the project that she decided to work with Bhushan as a PhD student and eventually follow him to UCLA. She completed her dissertation about the differentiation, self-renewal and regeneration of beta cells — pancreatic cells that produce, store and release insulin, which lowers blood sugar concentrations.

Beta cells don’t replicate easily: Current estimates are that they last between five and 20 years. This fact drove Georgia’s curiosity about intestinal stem cells, which continuously replace themselves. She received a Mentored Research Scientist Development Award (K01) from the National Institutes of Health (NIH) and studied endocrine cell differentiation in the intestines at UCLA.

Her study inspired the project that currently occupies her lab at CHLA: trying to induce intestinal stem cells to make insulin. The ultimate objective is to use these cells to treat both Type 1 and Type 2 diabetes.

“The things that could happen in my lab could some days be exhilarating because I’m the only person in the world that knows this,” Georgia said. “And we have a goal that we’re working toward. We might really be interested in the science and the biology of it, but in the bigger picture, we are interested in helping people, and so that means a lot.”

Sci-fi such as ‘Frankenstein’ and ‘Gattaca’ can tell us something about science, says gene therapist.

Analyzing life on a molecular level

Three faculty members in the Department of Biological Sciences at the USC Dornsife College of Letters, Arts and Sciences received research grants from the National Institutes of Health to develop and apply innovative methods to analyze data on proteins, genes and their interactions.

Intestinal cells that make insulin? It could be possible one day