Gary Watson, Provost Professor of Philosophy and Law, has been named a fellow of the American Academy of Arts and Sciences, one of the world’s most prestigious honorary societies.

The scholar, who has joint appointments at the USC Dornsife College of Letters, Arts and Sciences and the USC Gould School of Law, is among 204 members newly elected to the academy.

The 2014 members include some of the world’s most accomplished scholars, scientists, writers, artists and civic, corporate and philanthropic leaders, as well as foreign honorary members, including those from Australia, France, Germany, Ghana, Hungary and Israel. 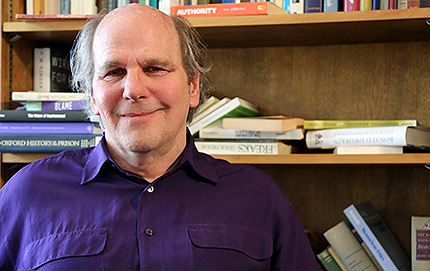 Gary Watson is an expert in moral theory and philosophy of law. (USC Photo/Matt Meindl)

“What this recognition means to me is that my work has not been in vain,” Watson said. “Of course, it’s a great honor in itself to hold a senior position, as I do, at a distinguished university in a top philosophy department and law school. But election to the academy indicates to me a recognition at the highest level that my work has shaped the scholarly conversation in a way that the best of my peers have found to be distinctively valuable.

“This recognition is at once inspiring, humbling and challenging,” he continued. “It gives me courage to carry on but also to try to live up to the honor it signifies. It also deepens my gratitude for the support I have been fortunate enough to receive from my many mentors and colleagues, and from my family, without whom my contributions would have been impossible.”

USC Dornsife Dean Steve A. Kay said: “I am extremely proud that professor Watson was granted this well-deserved recognition. The contributions that he has made to our School of Philosophy and to his field are immeasurable. Professor Watson’s election to the American Academy of Arts and Sciences reinforces that USC Dornsife faculty members are conducting research that has direct implications on policy and societal change.”

“I join all of my colleagues at USC Gould in congratulating Gary on this tremendous honor,” Rasmussen said. “His election to the academy is a well-deserved recognition of his prominence in the fields of moral agency, moral responsibility, freedom of action and freedom of will. He joins the growing ranks of USC academy fellows, and we are fortunate to have him as a member of our intellectual community.”

Long regarded as a leading expert in moral theory, moral psychology, philosophy of law, and moral and criminal responsibility, Watson joined USC in 2008.

He is among 11 USC faculty members, four of whom have primary appointments at USC Dornsife, to hold the title of Provost Professor. Appointed by the provost, these faculty members are outstanding interdisciplinary scholars who contribute to the university by attracting excellent faculty and graduate students while adding significantly to the culture of interdisciplinary research and education that is a hallmark of academic life at USC.

Watson’s courses at USC include graduate seminars on philosophy of law and contemporary philosophical literature on value, as well as undergraduate courses in law, society and politics.

His book Agency and Responsibility (Oxford University Press, 2004) is considered a classic, containing such celebrated essays as “Responsibility and the Limits of Evil,” “Free Agency,” “Disordered Appetites: Addiction, Compulsion and Dependence” and “Two Faces of Responsibility.”

Since its founding in 1780 by John Adams, James Bowdoin, John Hancock and other scholar-patriots, the academy has elected leading “thinkers and doers” from each generation, including George Washington and Benjamin Franklin in the 18th century, Daniel Webster and Ralph Waldo Emerson in the 19th century, and Albert Einstein and Winston Churchill in the 20th century. The current membership includes more than 250 Nobel laureates and more than 60 Pulitzer Prize winners.

Among the nation’s top honorary societies, the academy is also a leading center for independent policy research. Members contribute to academy publications and studies of science and technology policy, energy and global security, social policy and American institutions, and the humanities, arts and education.

The new class will be inducted at a ceremony on Oct. 11 at the academy’s headquarters in Cambridge, Mass.