You’ve heard of 3-D printing. But what about 3-D drawing — creating tangible contours, squiggles and polygons with colorful plastic filaments in space? That’s where 3Doodler, the freehand 3-D pen, comes into play.

Students at the USC Roski School of Art and Design have been beta-testing the new 3-D medium throughout the semester. This week, they are traveling to New York to showcase the tool’s potential in demonstrations at Museum of Modern Art (MoMa) Design Stores in New York City on May 3 and 4.

USC Roski students’ exclusive access to the 3Doodler pens stemmed from a collaboration fostered at a 3-D print show in London between USC Roski Dean Erica Muhl, design area head Haven Lin-Kirk and the 3Doodler founders. At the start of the spring semester, 3Doodler sent 15 of the then-unreleased pens to USC Roski’s “Three-Dimensional Design” class for students to experiment with, learn from and critique.

This is a pretty incredible tool. It ignites your imagination with what’s possible.

“The class is a materials-based introduction to 3-D problem-solving,” said faculty member Alexis Zoto, who teaches the course. “The pens are another area of exploration. We’ve been playing with their capabilities of structure and how far we can push the material. It’s important to understand a tool’s limitations as much as what it can do.”

The pen extrudes the same plastic filaments used in 3-D printers, but it allows the user to start and stop extrusion by pressing a button while sketching. The filaments, which come in a variety of colors, can attach to paper, build layers and form actual lines suspended in the air. Though students initially found the speedy extrusion hard to control, Lin-Kirk said that their diligent practice grew into mastery.

“To be able to actually render something accurately to the scale that you want is something that visual artists are accustomed to doing with pencil and paper before they go onto the computer,” Lin-Kirk said. “This is a pretty incredible tool. It’s one of those things that’s so simple, it ignites your imagination with what’s possible.” 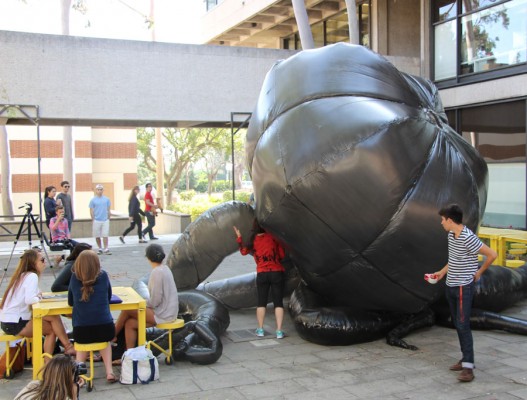 Students tweak their octopus sculpture in the Watt Hall courtyard.

The design class has also delved into other areas of spatiality and dimensional forms throughout the semester. “Inflatables” week was a recent class favorite. Students used standard garbage bags, tape and electric fans to create massive inflated sculptures, including a caterpillar and octopus, in courtyards on campus.

Other projects have entailed pipe cleaners, Makerbot scanners and flatpacks — flat material that designers can cut out to create 3-D models. Zoto said the myriad of mediums used in class enhances a student’s ability to adapt to the ever-evolving 3-D field.

“My goal is for students to have that creative thinking and problem-solving capability because the technology is going to change, and change again,” Zoto said. “They need to be flexible to be able to use whatever tools they have at hand to get the job done.”

For the MoMA Design Stores showcase, the students 3Doodled an iconic New York cityscape, which includes yellow cabs, the Statue of Liberty, the Empire State Building, St. Patrick’s Cathedral and more. Their renderings will appear in the storefront windows, and students will also host live 3Doodling demonstrations for customers. As an added bonus, they will accompany the 3Doodler founders to a Kickstarter anniversary party.

“The students are doing something very few people in industry get a chance to do,” Lin-Kirk said. “They’re talking directly to a startup company, giving their evaluations and flexing their muscles as creative people — as artists and designers. It’s very real world.”

More stories about: Design, Roski School of Art and Design

Jessica Bellamy, now a master’s degree candidate at the USC Roski School of Art and Design, uses her paintbrush to make sense of the “dystopian utopia” of Los Angeles.