You can likely summon the quality of his voice in your mind, as well as its particular pitch and cadence. For someone with a rare condition called phonagnosia, however, this task is impossible. When phonagnosiacs hear a voice behind them, for example, they are unable to identify a speaker even if familiar to them.

Understanding this condition and identifying its locus in the human brain is one focus of the research at the Image Understanding Laboratory, led by Irving Biederman, holder of the Harold Dornsife Chair in Neuroscience, and professor of psychology and computer science at the USC Dornsife College of Letters, Arts and Sciences.

Sarah Herald, a junior majoring in the new bachelor of science in computational neuroscience degree, works in the lab and uses functional magnetic resonance imaging (fMRI) — brain scans — and advanced computer modeling to analyze test subject data. The research, she said, is right up her alley.

Two years ago, Biederman and neuroscience program co-director Sarah Bottjer, professor of biological sciences and psychology, revised the neuroscience curriculum to make it more rigorous and focused. They also developed and added the computational neuroscience degree. The existing Bachelor of Science in neuroscience was structured primarily for premed students, which entailed substantial “wet lab” work in chemistry and biology.

But Biederman made an observation.

“There was a type of student who was gifted mathematically and fascinated by the workings of the brain, but not necessarily interested in medical school,” he said. “The B.S. in neuroscience lacked the branch of science called computational neuroscience, in which mathematical and computational techniques are applied to understanding the organization and function of complex neural systems.”

The computational approach to neuroscience has greatly enhanced scientific understanding of the human brain in recent years. Each of the brain’s 100 billion neurons activates or inhibits approximately 6,000 other neurons. From this pattern of activation arises the mind: perception, emotions, vision, hearing, memory, personality, intelligence. 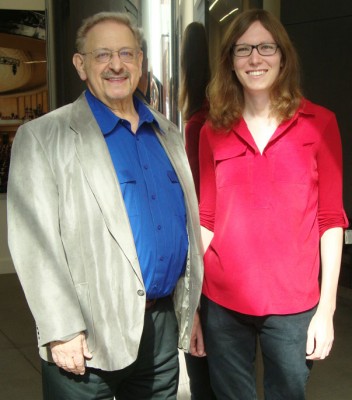 “You couldn’t begin to understand those patterns of interaction unless you had some sophisticated mathematics that would allow you to express them,” Biederman said. For example, neural network modeling uses mathematics to capture the activation patterns of networks of neurons. Even the movement of neurotransmitters down the axon of a neuron can be analyzed by looking at the geometry of the neuron.

One thing that makes the department’s new degree unique is that it’s available to undergraduates at all. The computational approach to neuroscience is generally not taught until graduate school. Some of the degree’s coursework in computer science, biomedical and electrical engineering is offered through graduate courses at the USC Viterbi School of Engineering.

There have been significant developments in applying mathematical techniques to problems in neuroscience, and Biederman and Bottjer wanted an undergraduate major that would reflect these developments.

Herald, a San Diego, Calif., native and USC Trustee Scholar, was excited to be able to pursue the new major. Her favorite classes have always been computer science and math, but she also had a strong interest in neuroscience.

This semester her favorite class is “Computational Neuroengineering,” a graduate-level course in which students program models of various parts of the nervous system using Matlab, a high-level programming language and interactive environment for numerical computation and visualization.

“We had learned a bit about the visual system in another neuroscience class,” Herald said. “Then in my computational neuroengineering class, we studied the same thing but learned how to program a model of it, so I was able to gain an understanding of not only what was happening, but why the brain was doing it. That was really inspiring.”

This month, Herald received the Brian Phillip Rakusin Neuroscience Scholarship Award for the best neuroscience major among juniors. Chosen on the basis of outstanding achievements and aspirations in the field, candidates submit a description of their research with their application. According to Biederman, the committee’s decision to award Herald was unanimous.

“Sarah has a real passion for understanding the science and gaining mastery over it,” Biederman said. “As a junior, she’s been tracked into some of the most challenging, graduate-level courses in the university and doing brilliantly in them. She’s come along so fast that we gave a paper together at the Society for Neuroscience conference in San Diego last November.”

By developing an original statistical analysis in her lab work, Herald was recently able to identify a region in the frontal part of the brain that distinguishes the phonagnostic test subject from the control subjects. Remarkably, this may be the same region that distinguishes prosopagnosic individuals (those who are unable to recognize faces). She plans to pursue graduate studies in computational neuroscience.

“The Rakusin scholarship has really reinforced how far I’ve come and motivates me to keep moving forward with my work,” Herald said. “Being wrapped up in the research day-to-day, you don’t always realize your breakthroughs and how much you’ve learned. But after compiling my application I can look back and say, ‘I came to the lab knowing absolutely nothing about 99 percent of what I’m working on now.’ It’s good perspective.”

Biederman said that the degree’s value is substantial for a variety of professional paths.

“Our first major graduated last spring and was accepted to the PhD program in computer science at Stanford. And he deferred for a year because Microsoft wanted him, right out of undergrad. High-tech companies are primarily hiring IQ and when you graduate with this major, the world knows that you can think mathematically about the most complex problems that exist.”

Whether one pursues medical or graduate school, or an industry or the high-tech sector, a graduate of this degree has demonstrated an aptitude and intelligence to handle complex problems, he said.

“You become a hot ticket.”

The $3 million study will unite researchers and data from 20 countries to answer some of the most pressing questions about Parkinson’s disease.

A degree of computational advantage