Our brain activity is more similar to that of speakers we are listening to when we can predict what they are going to say, a team of neuroscientists has found. The study, which appears in The Journal of Neuroscience, provides fresh evidence on the brain’s role in communication.

“Our findings show that the brains of both speakers and listeners take language predictability into account, resulting in more similar brain activity patterns between the two,” said Suzanne Dikker, the study’s lead author and a postdoctoral researcher in New York University’s Department of Psychology and Utrecht University. “Crucially, this happens even before a sentence is spoken and heard.”

“A lot of what we’ve learned about language and the brain has been from controlled laboratory tests that tend to look at language in the abstract — you get a string of words or you hear one word at a time,” added Jason Zevin, an associate professor of psychology and linguistics at the USC Dornsife College of Letters, Arts and Sciences and one of the study’s co-authors. “They’re not so much about communication, but about the structure of language. The current experiment is really about how we use language to express common ground or share our understanding of an event with someone else.”

The study’s other authors were Lauren Silbert, a recent PhD graduate from Princeton University, and Uri Hasson, an assistant professor in Princeton’s Department of Psychology.

From bottom up to top down 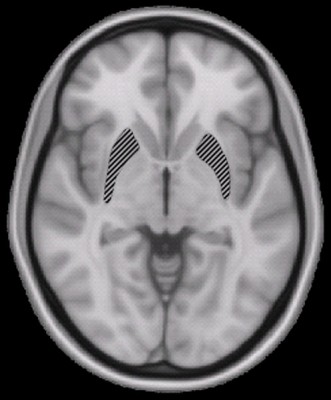 Scientists have shifted to a top-down view of the brain.

Traditionally, it was thought that our brains always process the world around us from the “bottom up” — when we hear someone speak, our auditory cortex first processes the sounds, and then other areas in the brain put those sounds together into words and then sentences and larger discourse units. From here, we derive meaning and an understanding of the content of what is said to us.

However, in recent years, many neuroscientists have shifted to a “top-down” view of the brain, which they now see as a “prediction machine”: We are constantly anticipating events in the world around us so that we can respond to them quickly and accurately. For example, we can predict words and sounds based on context — and our brain takes advantage of this. For instance, when we hear “Grass is …” we can easily predict “green.”

What’s less understood is how this predictability might affect the speaker’s brain or even the interaction between speakers and listeners.

In The Journal of Neuroscience study, the researchers collected brain responses from a speaker while she described images that she had viewed. The images varied in terms of likely predictability for a specific description. For instance, one image showed a penguin hugging a star (a relatively easy image in which to predict a speaker’s description). However, another image depicted a guitar stirring a bicycle tire submerged in a pot of boiling water — a picture that is much less likely to yield a predictable description: Is it “a guitar cooking a tire,” “a guitar boiling a wheel” or “a guitar stirring a bike”?

Then, another group of subjects listened to those descriptions while viewing the same images. During this period, the researchers monitored the subjects’ brain activity.

Activity patterns in the brain

When listeners can predict what a speaker is going to say, the authors suggested, their brains take advantage of this by sending a signal to their auditory cortex that it can expect sound patterns corresponding to predicted words (e.g., “green” while hearing “grass is …”). Interestingly, they added, the speaker’s brain is showing a similar effect as she is planning what she will say: Brain activity in her auditory language areas is affected by how predictable her utterance will be for her listeners.

“In addition to facilitating rapid and accurate processing of the world around us, the predictive power of our brains might play an important role in human communication,” noted Dikker, who conducted some of the research as a postdoctoral fellow at Weill Cornell Medical College’s Sackler Institute for Developmental Psychobiology. “During conversation, we adapt our speech rate and word choices to each other — for example, when explaining science to a child as opposed to a fellow scientist — and these processes are governed by our brains, which correspondingly align to each other.”

The research was supported by grants from the National Institutes of Health (numbers P01-HD001994, R01-MH094480), Chinese Academy of Sciences Fellowships for Young International Scientists (2012Y1SA0004) and a Netherlands Organisation for Scientific Research Innovation Scheme Veni Grant (275-89-018).

COMMENCEMENT 2022: Nwodim, who made her name in acting and comedy after graduating from USC Dornsife in 2010 with a degree in biological sciences, will speak during the college’s satellite ceremonies on May 13.

What does the new generation of anthropologists need to know?

USC Dornsife relaunches program with an eye toward collaboration, technology and topics like medical and visual anthropology: “The last thing the world needs is another 20th-century PhD program.”

You took the words right out of my brain