It’s been a big year for USC sophomore Rini Sampath.

She was elected vice president of the Undergraduate Student Government (USG). She became a U.S. citizen. And, as a spring 2013 admit, she’s been at USC less than two years.

The moment that USG announced the winners of the student leadership elections, Sampath remembers screaming and hugging her running mate Andrew Menard. With 44 percent of the total vote, Menard would become president and Sampath vice president for the 2014-2015 school year. 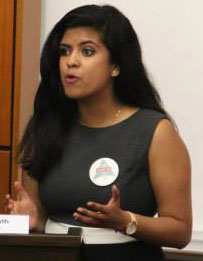 “We would go to different meetings, like Africa SC, Black Student Assembly, QUASA and hear what [student] concerns were. As we were running our campaign, we took those concerns and implemented them in our platform,” Sampath said. She wants to make sure the communication she and Menard had with students during the campaign doesn’t stop once they officially take office.

The university’s future president and vice president plan to achieve their goal by attending student organization meetings and holding forums where students can voice their concerns. Other goals of their ambitious platform are creating a weeklong Cultural Fair, expanding tuition to cover 20 units, allowing re-entry and improving wi-fi at the Los Angeles Memorial Coliseum, working with university officials to improve the Lyon Center and Leavey Library, and improving the spring admission transition process.

Sampath has a particular interest in fellow spring admits. She spent a semester studying at Boston University before coming to USC as an international relations major at the USC Dornsife College of Letters, Arts and Sciences, where she promptly became involved in campus life. In only her second semester at USC, Sampath was USG co-director of external relations, editorial director of the Daily Trojan and competed as part of the mock trial and Model U.N. teams.

But, she said, “I want to make a difference in the spring admit group because I noticed a lot of people who are spring admits don’t have a place on campus.”

Constantina Konugres, a friend who has known Sampath since high school, said, “She’s only been here a little more than a year, and she’s already made such a difference.”

Konugres, who worked on the campaign as co-director of social media and public relations, described Sampath as upbeat, extremely smart, driven, a big dreamer and big thinker. She believes that Sampath sets a great example for others as a woman, a spring admit and someone with an international background.

Sampath was born in India and has lived in Singapore. In March, she received her American citizenship after 10 years of living in California.

What inspired Sampath to get involved so quickly?

“When I set my mind to something, I put 110 percent of myself into it,” she said. “If that requires me to go that extra mile, go to that extra meeting, meet that extra person, I’m willing to. That’s what keeps me going.”

Zakhary Mallett used local transportation as a child, then set policy as the youngest-ever member of the Bay Area Rapid Transit board. Now he’s doing doctoral research on whether all transit users pay their fair share.

High achiever gears up for leadership in student government