Sure you know baseball, football and basketball. How’s your knowledge of botball?

The USC Viterbi School of Engineering and the Kiss Institute for Practical Robotics hosted the 2014 Botball Los Angeles Regional Tournament on April 26. For this National Science Foundation-sponsored event, teams of middle school and high school students design, build and program robots to complete a set of challenges on a game board.

Teams build robots out of materials such as Legos, metal and electronic hardware, complete with robotic arms and claws used to manipulate balls and cubes. The twist: The robots are programmed to make decisions and complete tasks on their own.

“The big thing that distinguishes botball from a lot of the other robot competitions out there is that they focus more on writing code — developing software — for complete autonomy on the robots,” said Ross Mead, botball organizer and USC Viterbi computer science PhD candidate. “There’s no remote control: The robots are completely autonomous, which is something no other robot competition can completely claim at this level of education.”

A first for the competition

This year’s theme was a socially assistive one. Botball’s mascot, Botguy, has returned from his Mars mission — the theme of last year’s competition — and must now go through physical therapy to readjust to Earth’s environment.

To accomplish this, the robots assist Botguy through his physical therapy exercises: sorting “physical therapy cubes” based on color, moving hangers to various racks and going to an exercise bench. Each completed task earns the team points; the most complicated exercises are worth more points. 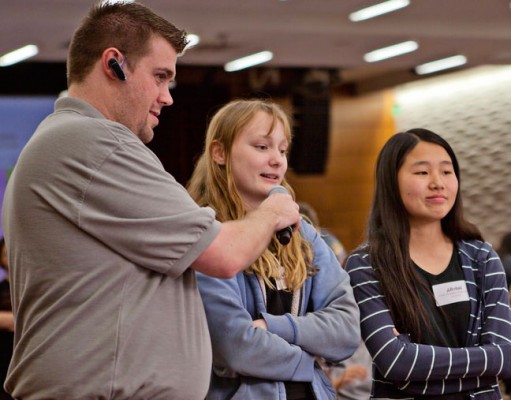 This year 27 teams competed and for the second year in a row, South Pasadena High School was the regional champion, a team led by Helena Roberts-Matarić, daughter of USC professors Maja Matarić and Rich Roberts.

Mead spearheaded this year’s socially assistive theme — the first one in botball history. As a botball instructor, Mead teaches workshops, mentors teams and participates in the Global Conference of Educational Robotics, where along with other mentors, they decide the theme of the game.

“We start off with a story — a narrative — to motivate what they’re doing,” he said.

It’s fitting for USC Viterbi to host a robotics competition with a socially assistive theme, as the school is one of the global leaders in socially assistive robotics. Professors such as Matarić, Mead’s PhD mentor, program robots to help people in their everyday lives, especially those with special needs.

“These are all scenarios you would actually see in human physical therapy,” Mead said. “There are gross motor task exercises, fine motor task exercises and there’s a workout bench. There are ‘activities of daily living,’ such as lifting hangers and putting them on different racks. These are classic things we do in physical therapy for people who have had strokes, or the elderly.”

Mead is a botball veteran; he competed in the Indiana league as a high school student before starting a botball team in his hometown of St. Louis, and he was the world champion in 2006 and 2007. When he moved to Los Angeles to attend USC Viterbi for graduate school, he quickly started the Los Angeles botball region and has continued mentoring students since. He has now been involved with the game for 14 years.

“I would credit this program as one of the main reasons I got into robotics,” he said.

Researchers will study optimized symbiotic vehicles for use in warehouses and for robot deliveries.

EARTH WEEK: Wood burning stoves are fouling the air in Fairbanks. USC Viterbi is bringing together students from across the university to clean the city’s air with “chimney cherries” that filter out smoke particles.