Bouma is among 283 undergraduates nationwide honored for their research with a Goldwater Scholarship for the 2014-15 academic year.

“I was astonished and delighted in equal measure,” said Bouma, a junior majoring in physics and mathematics with a minor in astronomy at the USC Dornsife College of Letters, Arts and Sciences. “I had worked hard on the proposal, so I was grateful and relieved to learn I had been successful.”

The fact my sister came here absolutely contributed to my positive perception of USC.

Created by Congress in 1986 in honor of former United States senator and 1964 presidential candidate Barry Goldwater, the undergraduate award is meant to encourage outstanding students to continue careers in science, mathematics and engineering. Awarded annually, the merit-based scholarship grants a maximum of $7,500 per academic year based on financial need.

USC Dornsife junior Dalton Banh, a biological sciences major, won an honorable mention, as did Saro Meguerdijian, a junior majoring chemical engineering at the USC Viterbi School of Engineering. Banh, Meguerdijian and Bouma are friends who lived together in a dorm their freshman year.

“It was great to see that Dalton and Saro got honorable mentions,” Bouma said. “Not many of those are given out, and I’m sad they couldn’t win it, too.”

Born in Bethesda, Md., Bouma grew up in Geneva, Switzerland. When he was 4, his family moved there so his mother, a human rights lawyer, could work at the United Nations. 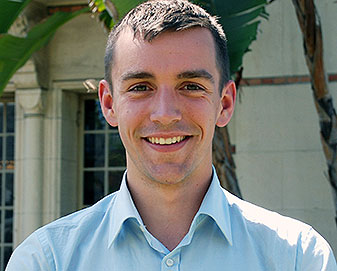 Bouma is not the first member of his family to attend USC Dornsife — he is following in his sister’s footsteps. Simca Bouma ’12, who graduated with a bachelor’s in mathematics and physics, also earned a noteworthy award — the Astronaut Scholarship. She is now in the second year of her PhD in physics at the University of California, Berkeley.

“The fact my sister came here absolutely contributed to my positive perception of USC,” Bouma said. “I was a little kid then and I looked up to her. I still do. When I visited her, she showed me around the campus and I was impressed.”

Bouma credits his sister for his academic discipline.

“I knew my sister had done really well in school,” he said. “Seeing that led me to care more about my studies, until I eventually figured out this is a pretty solid way to invest my time, and there’s not much else I would be happier doing.”

He said he was grateful for all the support he has received at USC and cited Gene Bickers, vice provost for undergraduate programs and professor of physics and astronomy, as his mentor.

“Dr. Bickers is a little bit like Yoda. He’s just a really great, genuine person and has all the advice someone like me needs.”

Bouma also credited past research mentors Mark Keller and Ganesh Balakrishnan, along with Clifford Johnson, professor of physics and astronomy, as having made a deep impression on him.

“I agree with Dr. Johnson’s argument that we should try to give science a more central role in our culture, side by side with arts and the humanities,” Bouma said.

The most challenging class he said he has taken so far was taught by Sheldon Kamienny, professor of mathematics.

“It was serious proof-based math. A good analogy is trying to build furniture in a dark room with tools you’ve never seen before,” Bouma said. “So you try to build a chair and you sit on it and it falls apart. And then repeat. It’s a process which builds you.”

He currently works on solar energy in the laboratory of Michelle Povinelli, assistant professor of electrical engineering at USC Viterbi, where he wrote a research proposal focusing on novel approaches for modeling solar cell geometries. He will spend the summer studying plasmon decay dynamics at the California Institute of Technology and will also be starting as special projects chair for the Society of Physics Students.

Bouma aims to pursue a PhD in applied physics. His career goal is to conduct research in physical electronics and optoelectronics for applications in energy conversion and storage.

“But if I wound up doing something in fusion or working on batteries, that would also be an interesting career path,” he said.

“Nature is nature and doesn’t really care if you call it physics, chemistry or biology,” Bouma said. “The really inspiring thing is to wake up every morning and discover how things interconnect. Looking forward, I am trying to figure out where I can best translate these skills into making an impact that can benefit others.”

The Leapfrog Group, an independent national watchdog organization, honors the hospital for achieving the highest national standards in patient safety.

Salutatorian Shreya Daniel looks to do it all after graduation

COMMENCEMENT 2022: Medical school is next for the USC Dornsife soon-to-be graduate, along with a side hustle that has so far raised nearly $15,000 for charity.