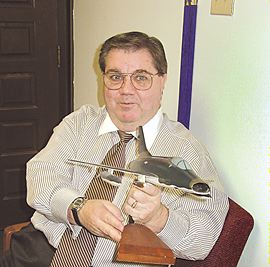 Aviation Safety director Mike Barr holds a model of a jet fighter. He flew for the Air Force for 23 years and has been teaching at USC since 1985. Investigating aviation accidents, Barr said, “is like [putting together] a thousand-piece jigsaw puzzle. When you put all the pieces together, you will get a picture.” About half the world’s investigators have been trained at USC.

Except for Mike Barr.

Twenty-three years in the Air Force flying jet fighters, including 137 combat missions in Vietnam, and serving as an instructor pilot for new pilot trainees makes him happy to be an old pilot. And the way he runs USC’s Aviation Safety Program can only be described as bold.

There is no marketing, no degree program, no laboratory, no plans for distance education, and only one tenured faculty member on the teaching staff.

Classes are short, expensive and full. Students – most experienced pilots themselves – are a challenge to teach, they already have jobs, and they don’t look forward to the situations that will demand their new knowledge.

USC established its program in aviation safety in 1952, after successfully bidding on a contract to train Air Force accident investigators. Civilian courses began in 1956, while the Air Force courses at USC ceased in 1993.

Aviation Safety offers 14 different courses, ranging in length from two to 10 days, with approximately 40 sessions per year. Several times each year, Barr takes courses on the road and teaches in other cities such as New York, Toronto, Copenhagen and Mexico City. The USC Aviation Safety Program has become an international standard by which other programs are judged. A student completing about 200 hours of instruction can receive a certificate in aviation safety, which, said Barr, is considered advanced education in aviation safety. But Aviation Safety will remain a School of Engineering continuing education program for working professionals, and there are no plans to allow undergraduates to study for a bachelor’s degree in the field.

“A student who has completed the coursework but who has no real aviation experience would not be employable,” Barr ex plained.

Students come from national and international air carriers, aircraft manufacturers, government air safety agencies (foreign and domestic), police departments, the military and other government agencies such as the Forest Service and the Border Patrol. They usually have several years’ experience in aviation and typically come to USC after receiving new responsibility for safety.

Instructors come from the same set of people, except they have far more experience.

“We have two accident investigators from the National Traffic Safety Board who teach accident investigation. The instructor for the engine course is from General Electric. The head photographer for the Canadian Transportation Safety Board teaches ‘Photog raphy for Aircraft Accident In vestigation,’” said Barr. The lone tenured USC faculty member is Najmedin Meshkati, associate professor of civil and en vironmen tal engineering, who teaches “Human Fac tors in Aviation Safety.”

“The instructors are all technical experts in their field,” said Barr. “It takes me about two years to find a new teacher because there are so few people who have this technical knowledge and who also can teach.”

Meshkati teaches both undergraduates and graduates. He said students of aviation safety are his toughest to teach because they are both extremely professional and demanding.

“You must develop credibility with them, and they can be very critical in their evaluations,” he said. “A typical class looks like a mini-United Nations. These are key people at an operational level who can make a real difference about safety in their airlines and in civil aviation.”

With so many students traveling from across the country or the world, the courses might seem ideal candidates for distance education, but Barr said the human contact in class is important.

“Students tells us that 25 to 30 percent of what they learn is from cross-talk – that’s talking to each other at lunch or after class,” he said.

With students from more than 65 different countries, it isn’t hard to imagine that a European pilot, a South American air-traffic controller, an American aircraft engineer and an Asian airline-safety executive might learn a lot from each other. “Just putting these people in the same room is a big part of the value of our program,” Barr said.

While investigating airplane accidents requires a vast amount of technical expertise from many different fields, Barr does not view it as an overly complex endeavor.

“It’s like a thousand-piece jigsaw puzzle. When you put all the pieces together, you will get a picture,” he said. “This isn’t brain surgery.” The smashed and tangled metal, melted plastic, electronic records and broken bodies of an airplane crash all tell stories, he added.

Barr graduated from the U.S. Naval Academy at Annapolis in 1962. He first took the accident investigation course at USC in 1968, becoming an instructor in aviation safety at USC in 1985, after retiring from the military. He was named director of the program in 1993.

One of the nation’s most quoted experts on air disasters, Barr recognizes the media fascination with airplane crashes – and he embraces it. In fact, one of his program’s courses focuses on the pro per re sponse to air crashes, including dealing with reporters. Students practice answering tough questions from a media professional while a video camera records them.

“Media often jump to conclusions sooner than they should after a crash, and they frequently quote people who don’t have the proper expertise,” Barr said. “We need the people who know what they are talking about to tell the truth.”