Several years on since Egypt’s 2011 revolution, the country is in many ways less democratic than it was beforehand, argued an expert on the country’s military at the Ronald Tutor Campus Center.

Professor Robert Springborg, a visiting professor in the Department of War Studies at King’s College, London, delivered a lecture on the complicated relationship between Egypt’s civilian and military leadership, and the limited options facing U.S. officials dealing with its government.

To have a completely dominant military in control is a bad idea.

Springborg, a recently retired professor of national security affairs at the Naval Postgraduate School in Monterey, Calif., gave a detailed context on April 22 to a story that has captured world attention. Many of the anecdotes and statistics he shared underlined the difficulty of promoting democracy in a nation that has been run as a police state for generations.

The talk was organized by Laurie Brand, Robert Grandford Wright Professor and professor of international relations in the Middle East Studies program at the USC Dornsife College of Letters, Arts and Sciences. Brand, who is also an expert in Egyptian politics and history, said the talk was part of the program’s mission to promote interaction between USC students and top scholars in the field. Egypt’s political evolution is considered a critical area for students to understand, given recent developments.

“The role of the military in particular has been decisive since the January 25 Revolution, and Professor Springborg is unparalleled, certainly among American academics, in his familiarity with and insights regarding the Egyptian military,” Brand said. “It was my hope that his analysis would inform, inspire and perhaps challenge our students as they deepen their knowledge of the region.”

A central figure in his lecture was Field Marshal Abdel Fattah el-Sisi, the former head of Egypt’s army and current presidential candidate, who is widely expected to win. 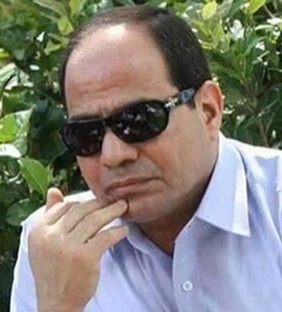 “He believes there’s no need for counter-balancing institutions of democracy,” Springborg said, noting that for the first time in Egypt’s history, a single figure is expected to control the presidency, ministry of defense and ministry of the interior.

Springborg’s lecture was an exploration of history, sociology and foreign relations, depicting a society that has spent much of the last century under military rule.

Students and faculty members heard how the military has empowered itself to try civilians for perceived threats. The Egyptian military is the largest in Africa, with 190 soldiers and officers for every 10,000 inhabitants; add in barracked police forces and it’s as high as 415 per 10,000 people.

“There are zero civilian employees in the military, if you don’t count making the tea and coffee,” Springborg said.

Most of those military employees receive infamously poor treatment — even those who handle technical equipment. The army’s sheer size justifies its large officer corps, which enjoys significant largesse and preferential treatment, Springborg said.

The talk painted a disheartening picture of U.S. relations with Egypt, noting that the American government is fiercely committed to preserving transit flights over the country and worries about growing terrorist operations.

The U.S. response to the consolidation of power has been “hoping everyone forgets all this nastiness,” Springborg said. “To have a completely dominant military in control is a bad idea — we need civilian institutions or we’re courting disaster.”

Water dispute on the Nile River could destabilize the region

The rapid filling of a giant dam at the source of the world’s longest river could reduce the water supplies going to Egypt and increase tensions with Ethiopia, a new USC study finds.

Carolina Cortez hopes her time with the State Department will allow her to pursue her dream of being a diplomat to a Latin American country.

An inside look at Egypt’s empowered military