How would you cook dinner without electricity? Or get your homework done after sunset without turning on the lights? And on a more crucial level, what if your local hospital had no refrigeration for medicine or power for life-saving equipment?

Most Americans take our electrified society for granted. But for R&B and hip-hop recording artist, songwriter and record producer Akon, who was born in the United States but raised in Senegal in West Africa, a lack of energy was a way of life.

The five-time Grammy Award nominee did his homework at night by the light of a kerosene lamp. It was a hazardous and highly flammable option, but the only one available in his rural village.

“Imagine giving birth or having an operation in a dark hospital with only a flashlight and no other equipment,” he said. “Need a vaccine? Forget it, there are no refrigerators to keep them cold. Pretty much everything you and I take for granted cannot function without power — schools, hospitals, factories, farms and businesses.”

Akon’s personal experiences highlight a critical issue now facing developing nations: energy poverty. In sub-Saharan Africa, nearly 600 million individuals — 7 out of 10 — lack access to even the most basic electricity. Energy poverty hampers modern hospital services, job opportunities and the ability to get a quality education. Most would agree that reliable energy access is crucial for development and poverty reduction.

Akon’s commitment to this issue yielded his “Akon Lighting Africa” initiative, aimed at bringing power to 1 million African homes by the end of 2014.

On April 23, Akon and representatives from ONE — an international advocacy organization co-founded by musician Bono that fights extreme poverty and preventable disease in Africa — launched the #PowerProject Campaign Lab at USC. The lab is an incubator for crowd-sourced digital media campaign ideas that will ultimately be used to raise awareness and drive action as part of ONE’s official energy poverty campaign.

The campaign was launched during Vice Dean for Academic Programs and Professor Steven Lamy’s “Introductory Theory and Analysis in International Relations” class with the help of more than 200 students.

Millennials can make an impact

USC Dornsife College of Letters, Arts and Sciences alumnus Mike Drachkovitch ’10, manager of marketing and external relations at ONE, spoke to students.

“We believe that your generation is poised to make a difference and create change, and that’s why we’ve targeted you and are starting in this classroom,” said Drachkovitch, who earned his bachelor’s degree in international relations and fondly remembers his first class with Lamy during his freshman year. 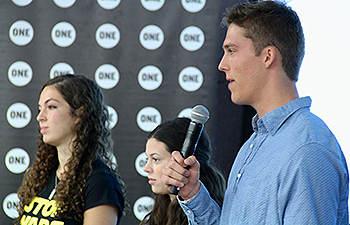 “I’m particularly excited to work with young, creative, innovative college students,” Akon said. “I am excited to usher in a new kind of Internet superstar — millennials who want to make a global impact.”

Student campaign ideas featured everything from video to celebrity participation, campaign T-shirts and online letter-writing tools. Many emphasized the element of mystery as a means of arousing interest and driving action via social media.

Kaitlyn Hittelman, a sophomore majoring in international relations (global business), worked on a campaign focusing on relatability. Her team asks users to document via social media their own “energy-filled moments” to highlight little things that first-world citizens might take for granted — something as simple and joyful as using a smartphone to view a photograph of a new nephew. Acknowledging your own privilege helps you to care about the circumstances of others and drives action, she said.

“This project really brought the issue of energy poverty to my attention and got me excited to have a hands-on opportunity to think creatively about ways that our generation can be involved,” Hittelman said. “In this class we’ve learned a lot about the effects of globalization and how one of the biggest transporters of information now is social media and the Internet.

“If we can use these tools to benefit an entire continent, that’s something really powerful.”

Jay Kolina, a junior majoring in international relations, and his group worked on a campaign with a threefold approach to “educate, inspire and involve.” They utilized straightforward messaging, sharing facts that led to action items such as users signing pre-generated letters to Congress.

Keeping in mind its targeted youth demographic, his group’s campaign was clever and slightly edgy, with a goal to generate curiosity. One slogan: “Turn Off the Lights, Turn on the Action.” To increase involvement, especially among social media users’ closest inner circles and friends, the campaign integrated a call for posting selfies as a vehicle for sharing the campaign’s educational messaging.

“Brilliant. I loved it,” panelist Horowski told students after their presentation. “I think edgy resonates really well with millennials and the college demographic, so I think you guys hit the nail on the head.”

Kolina appreciated the opportunity to collaborate with Akon and ONE for this project.

“Social media is an incredible tool for driving change and awareness in many demographics and Akon recognizes that,” Kolina said. “I also think that Akon is a good judge of creativity and marketability. He was invested in each and every group’s presentation.”

ONE and Akon will select the top three proposals and help further develop those ideas. The winning proposal will become the digital centerpiece of ONE’s nationwide #PowerProject campaign this summer. #PowerProject includes an online letter-writing feature that allows people to send letters to Congress, urging senators to support a bill currently in the House that, if passed, would bring first-time energy access to more than 50 million people in sub-Saharan Africa at no cost to U.S. taxpayers. 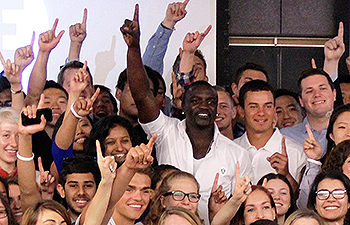 After the presentations, Akon huddles with students on the stage.

Drachkovitch was thrilled to launch the campaign lab at his alma mater.

“Like ONE, USC Dornsife has a very interdisciplinary approach to solving global problems,” he said. “It’s a perfect match for ONE, which relies on a vast array of skill sets and professionals to tackle extreme poverty and to launch this type of lab — which brings together entertainers, advocacy professionals and students to come up with the best next idea.”

“As one of the analytical frameworks we use in international relations, I tell students that they need to learn how to play chess in order to be an effective international relations person,” Lamy said. “You have to play on four chessboards simultaneously: economic, political/military, cultural and social/global civil society. That’s what this class teaches them how do to.”

At the end of the presentations, Lamy thanked Akon and the ONE team for choosing his class to launch the campaign.

“At USC we say “Fight On,” but in this class we change it to “Fight On for Something That Matters,” he said.

Before inviting everyone up on stage for selfies and a group photo, Akon left the students with an important reminder.

“You guys are the next leaders, next decision-makers, next entrepreneurs. Your voices mean a lot.”