Jode Lebeda was running in his first marathon — and, in his own words, “almost my last”  — when he fell to the ground in full cardiac arrest in the ASICS Los Angeles Marathon just after mile 20. But he was in the right place at the right time when he collapsed during the March 9 race.

“It was absolute luck,” Lebeda said. It happened near one of the medical tents staffed by the official medical sponsor of the marathon: Keck Medicine of USC.

Jatin Shah, a Keck Medicine emergency physician volunteering at one of the tents, was on the scene in a heartbeat. Along with Los Angeles Fire Department staff assigned to the marathon, Shah stabilized Lebeda, who was then transported to Ronald Reagan UCLA Medical Center, where he spent 10 days — some of them in a medically induced coma — in the neurointensive care unit while he recuperated from the effects of acute dehydration. On April 21, Lebeda got the chance to meet and thank Shah and his other rescuers at a press conference at the LAFD Station 3 in downtown Los Angeles.

“It’s rare for someone to have a heart attack during the marathon. But when people over-exert themselves in those conditions, it’s not surprising when they get into trouble.”

“The weather went up to 81 degrees and after noon, we saw many more people with cramps and dehydration,” Shah said after the press conference. “It’s rare for someone to have a heart attack during the marathon. But when people over-exert themselves in those conditions, it’s not surprising when they get into trouble.” 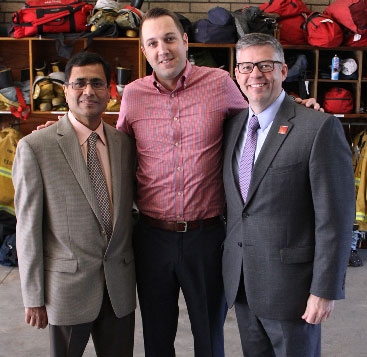 Since 2012, Keck Medicine has staffed 12 medical tents along the 26.2-mile route for exactly this reason. Almost 200 volunteer physicians, nurses and residents with experience in emergency medicine are available to meet medical needs that include dehydration, blisters, and joint and foot pain.

“In a great city like Los Angeles, it takes teamwork to make a valuable event like the L.A. Marathon happen and to ensure the safety of its participants,” said Glenn Ault, medical director of the marathon and associate dean of clinical administration at the Keck School of Medicine of USC. “I think I can speak for everyone when I say we’re all pleased with the outcome.”

At the end of the press conference, Ault presented Lebeda with an official marathon finisher’s medal for his courage and determination to complete the most important journey of his life.

50 years of keeping ‘the flame of the healing relationship alive’

“Introduction to Clinical Medicine” — one of the first programs of its kind in the U.S. — reminds medical students why they’re going through this rigorous training.

Medical school volunteers help those in need during COVID-19

Kids are exercising less and sitting more during the pandemic

USC research indicates a widening of the exercise gap between younger schoolchildren and adolescents.