Nearly 4,800 children in the United States are born with profound hearing loss each year, and another 5,000 will develop it by age 5, according to John Niparko, chair of the Department of Otolaryngology — Head and Neck Surgery at the Keck School of Medicine of USC.

With a cochlear implant, however, children can show a language-learning trajectory similar to their hearing peers. “And with the spoken language,” Niparko said, “anything is possible.”

Honored by the Albert and Mary Lasker Foundation for their contributions to developing cochlear implant technology, Graeme Clark, Ingeborg Hochmair and Blake Wilson discussed the past, present and future of the cochlear implant at the 2014 Lasker Lectures for the Lasker-DeBakey Clinical Medical Research Awards, held on April 10 at the Health Sciences Campus.

The basics of implants

To restore hearing, cochlear implants bypass damaged or missing hair cells in the cochlea to stimulate the auditory nerve directly. An electrode array collects impulses from a transmitter and sends them to different regions of the auditory nerve, which recognizes the impulses as sound.

“Fifty years ago, there was no effective treatment for patients with severe hearing loss,” said Keck School of Medicine of USC Dean Carmen A. Puliafito during his opening remarks. “Today, patients with these implants can speak clearly. Each of these honorees, in their own way, provided important advancements, and we are honored to have them here today.” 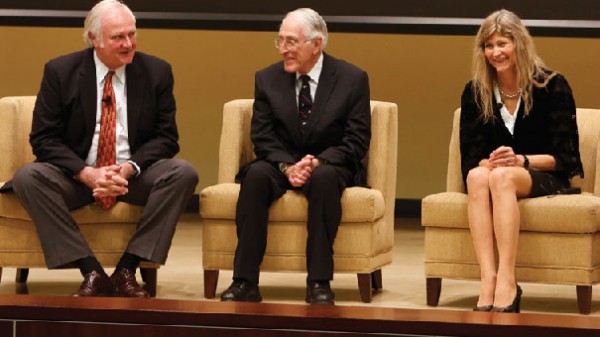 John House, a clinical professor of otolaryngology — Head and Neck Surgery, offered a few remarks about his uncle, William House, whose work on single-channel cochlear implants helped pioneer the technology.

“We’re very honored to have the other pioneers here,” he said. “We’re all standing on the shoulders of giants.”

Clark, a Laureate Professor Emeritus at the University of Melbourne, Australia, discussed the neuroscience behind implants during his presentation.

“My first challenge was to get around the damaged neural network in the inner ear,” he explained. “We could only do that by copying the coding of sound in the brain.”

Clark’s work in the 1960s and 1970s included determining how low- and high-frequency sounds are interpreted by the brain through temporal and place coding of sound frequencies. One breakthrough moment came in the late 1970s when an implant patient described signals not only as “sharp” or “dull” but also as “vowel-like,” corresponding to different sites in the cochlear.

“The current challenge is to produce a totally implantable implant, and there is one undergoing tests right now,” Clark added.

Hochmair, founder and CEO of MED-EL Medical Electronics, touched on current worldwide statistics in her presentation.

However, the need for more is great: At least five times as many children each year need a cochlear implant.

Hochmair also discussed various milestones in cochlear implant development, including the COMBI 40 multicenter study, in which many patients using an implant were able to understand someone unknown to them on an unknown topic over the telephone.

“Speech is being enjoyed for a very long time — 34 years for one patient,” she said.

In the future, Hochmair believes the ideal implant would have an individualized electrode covering the entire length of the cochlea, would be designed and implanted to allow for the long-term preservation of the inner ear structure and would provide benefit beyond speech understanding, such as music appreciation.

Wilson, co-director of the Duke Hearing Center at Duke University Medical Center, discussed the research and clinical steps that allowed the development of today’s cochlear implants.

According to Wilson, more detailed hearing is the result of a series of advances, including development and implementation of devices that are safe, have a long life span, provide multiple cochlea stimulation sites, enable high-speed recognition and use either bilateral electrical or combined electric and acoustic stimulation.

“The concept is to present to the auditory nerve all the information that can be perceived and then let the brain do the rest,” he said. “The brain plays an enormous role in hearing, so physicians and scientists must make sure that the brain and prosthesis work together optimally.”

Wilson noted several remaining challenges in implant development, including speech reception and sound localization, and reception of signals that are more complex than speech, such as music.

“Overall, the future is bright for cochlear implants, with many possibilities for improvement and broadened indications.”

Noise-induced hearing loss is linked to a buildup of fluid in the inner ear — and researchers found that treating that buildup with a readily available saline solution lessened nerve damage.

Trojan finds her balance despite rare type of hearing loss