USC officially broke ground on the USC Glorya Kaufman International Dance Center on April 23, opening a new era for arts at the university.

The  three-story, red brick home for the new USC Kaufman School of Dance will be built on West 34th Street at Watt Way.

A home for artistic expression

The world-class facility will house a studio performance space, five medium and small dance studios, a dance wellness center, dressing rooms, space for future classrooms and offices for faculty and administrators. A large collaborative space for dance majors will be available for use on the third floor. 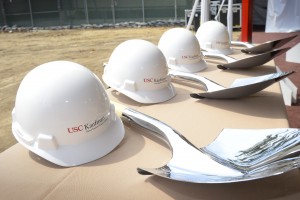 “Glorya Kaufman stands among our world’s greatest philanthropists and most ardent champions of dance,” Nikias said. “With her historic gift, she also distinguished herself as a true visionary for the future of dance education. We look forward to watching USC Kaufman develop into one of the world’s premier schools for dance education, as well as our university’s sixth exceptionally vibrant arts school.”

Added Cutietta: “A world-class school needs a world-class building. Thanks to the generosity of Glorya Kaufman, we will have both. By locating the building so close to the university’s other artistic performing arts schools, we have created an area of campus dedicated to performance. I can’t wait to welcome our first students to this magnificent building.”

A world-class school needs a world-class building. Thanks to the generosity of Glorya Kaufman, we will have both.

According to Gates, “This building will become the home for a transformative curriculum that will inspire a new generation of dancers and choreographers. The groundbreaking marks the beginning of a new educational model for USC Kaufman that we call ‘The New Movement.’”

For her part, Kaufman said: “I am thrilled to see construction begin on the Kaufman School. It is my hope that dance students will consider this building a second home, a place where they feel comfortable to express themselves and explore new ways to enhance the art of dance in the 21st century.”

The building’s architect is William Murray, principal at Pfeiffer Partners Architects Inc. of Los Angeles. This is the firm’s first building on the USC campus.

Murray said the building will be a key transitional structure from the main campus to the new University Village being developed across Jefferson Boulevard.

“Large Gothic-arched openings will bring generous amounts of natural light into the spaces as well as create monumental openings for entries into the building,” he said. A grand stair serves a multistory lobby at the main entrance, he noted, and the brick skin of the building will be Roman brick with large expanses of a diamond-shaped pattern. The sloped roofs of the building will be Italian tile. Window surrounds of precast concrete with detailed articulation “will give the building balance and richness,” he said.

In November 2012, Kaufman made the transformational gift to establish the dance school at USC that now bears her name. Her gift created an endowment to support the school’s programs in contemporary and classical dance, recruit renowned faculty and provide student scholarships, as well as fund construction of the instructional building. 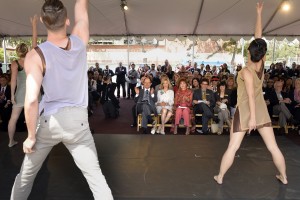 The USC Kaufman School of Dance is the first school to be established through an endowment at USC in nearly 40 years. It joins the university’s five preeminent arts schools in architecture, cinematic arts, dramatic arts, music and fine arts and design.

The gift to name the school was Kaufman’s largest gift to dance to date. Her past support includes gifts of $20 million to dance at The Music Center in Los Angeles, $6 million to the Alvin Ailey American Dance Theater and $3.5 million to The Juilliard School, among others.

Kaufman made the decision not to discuss the amount of her USC gift, saying she did not want people to focus on a number.

“I want them to think about what my gift will do for the students who will have wonderful opportunities because of it,” she said at the time.

USC Kaufman combines a conservatory environment with the academic rigor of a major private research institution as it prepares the dance leaders of the future. Its hallmark is the innovation of a new movement model to be expressed in new media, scholarship, studio practice and choreography.

The Bachelor of Fine Arts program offers students a robust performance repertory and strategic career skills, as well as opportunities for artistic development, interdisciplinary study and collaboration with artists in Los Angeles. 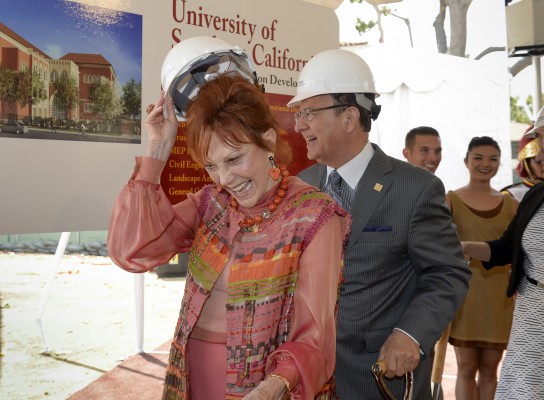 Cutietta, dean of USC Thornton, accepted a second deanship to head USC Kaufman. In April 2013, Gates, an internationally renowned dancer, choreographer and educator, was named vice dean and director of the school. Gates, a former principal ballerina with the Joffrey Ballet, Frankfort Ballet, Pennsylvania Ballet in Philadelphia and other leading companies, previously was a professor of dance at the University of California, Irvine, and has been honored by the American Association of University Women for her contributions to the field.

The gift from Kaufman represents significant support for The Campaign for the University of Southern California, a multiyear effort to secure $6 billion or more in private philanthropy to advance USC’s academic priorities.

Jodie Gates, an internationally renowned dancer, choreographer and educator, has been named vice dean and director of the new USC Kaufman School of Dance.