John Wilson, director of the Spatial Sciences Institute, has been named a 2014 University Consortium for Geographic Information Science (UCGIS) fellow, joining a group of the most esteemed scholars in the field of geographic information science.

Wilson, among the world’s leading scholars in spatial sciences, was recognized for his early research in terrain representation and analysis as well as his leadership in envisioning new directions for geographic information science education and research in the 21st century. He founded the journal, Transactions in GIS, published by Wiley-Blackwell in 1996 and continues to serve as editor-in-chief.

“This selection is very gratifying because it comes from my peers — scholars I have worked with in various capacities over the past three decades — and because it shows how some of the things we have worked to accomplish at USC have captured their attention,” said Wilson, professor of spatial sciences and sociology at the USC Dornsife College of Letters, Arts and Sciences, and director of the Geographic Information Science and Technology (GIST) graduate programs and GIS Research Laboratory.

He will be formally honored on May 19 during the UCGIS Symposium in Pasadena, Calif.

Wilson, who originally trained as a geographer, is founding director of the three-year-old Spatial Sciences Institute and is widely recognized for his significant contribution to the advancement of geographic information science education and research. He holds adjunct professorships at the USC School of Architecture and the USC Viterbi School of Engineering. 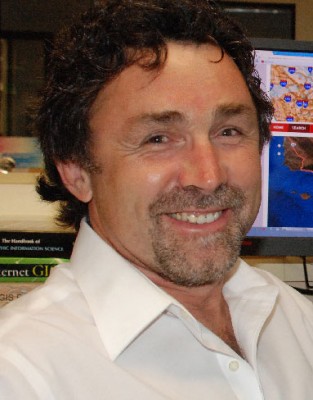 In 2013, he launched a bachelor of science degree in geodesign — the world’s first. The new major, which is a joint project among USC Dornsife, the School of Architecture and the USC Price School of Public Policy, trains students in design, planning, geographic information science and geospatial technologies.

Wilson’s research is focused on the modeling of environmental systems, making extensive use of GIS software tools, fieldwork, spatial analysis techniques and computer models. Much of this work is collaborative and cross-disciplinary, with the aim to improve knowledge and understanding of the factors linking society, the environment and human health.

The UCGIS fellows program was created in 2010 to celebrate the achievements of individuals in a variety of spatial disciplines and communities of practice that use spatial information. Fellows are selected by a review committee comprising current UCGIS fellows and members of the UCGIS executive committee.

A nonprofit scientific and educational organization, USGIS comprises more than 60 member and affiliate institutions. It was established in 1995 to advance GIS research and multidisciplinary GIS education.