Students in the Intellectual Property and Technology Law Clinic at the USC Gould School of Law filed two briefs with the United States Supreme Court this year in a push to protect small innovators from patent trolls.

Working on behalf of the Application Developers Alliance, Mikhail Brandon and Michelle Lee drafted an amicus brief in the case of Alice Corporation v. CLS Bank in late February, asking the court to take a strong stance on overly abstract patents.

The brief was co-authored with Public Knowledge, a Washington, D.C.-based nonprofit that advocates for digital rights. It focused on software patents that include complex-sounding language, but in fact are covering basic ideas.

“For many of these patents, the applicant will take an abstract idea, a concept that is not patentable, and bury it deep within technical jargon in their patent application. Many end up being granted,” Lee said. “What happens next is that, rather than cover a straightforward invention, the patents can be used to go after any company whose business touches on a broad concept covered in the patent.”

Added Brandon: “Many of these overly abstract patents that sneak through the U.S. Patent & Trademark Office are gobbled up by patent ‘trolls,’ nonpracticing entities who use them to write threatening letters or bring lawsuits —many of them frivolous. That’s their entire business model, and they often go after software companies and app developers — especially small ones that can’t defend themselves.”

Decision due on online video ads 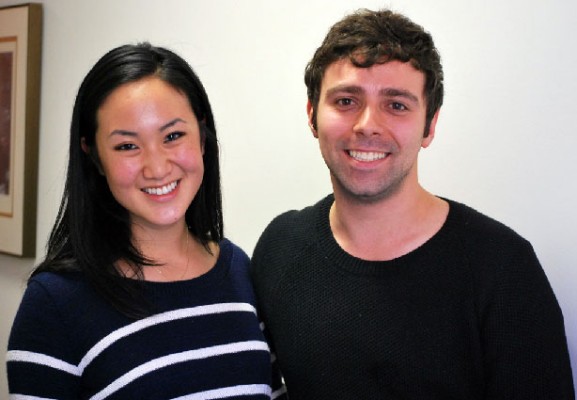 This was the second Supreme Court brief on this issue that Brandon and Lee helped draft. During the fall 2013 semester, they filed a brief asking the court to hear the case of WildTangent v. Ultramercial, which involved a patent covering online video ads.

In that case, the federal circuit twice upheld a patent that dealt with what the students said is another abstract idea, improperly held to be patentable because of complex-sounding implementation language.

The Supreme Court did not take the WildTangent case, but the interns expect the court to announce its decision on CLS Bank by July, which they believe will also apply to WildTangent.

In between writing these briefs, Brandon and Lee also wrote a letter to the Federal Trade Commission (FTC), urging it to proceed with a proposed study of patent assertion entities.

The students said diving into the patent protection issue was hard work, but a valuable learning experience. Both had very little experience with patent law prior to joining the Intellectual Property and Technology Law Clinic.

“There were a lot of late nights, but we got to stick with these issues through the entire school year, which I really liked,” Brandon said. “We got to master it. This is the kind of practice that only a clinic can provide.”

Charles Duan, director of the Patent Reform Project at Public Knowledge and co-counsel on the brief, said: “Mikhail and Michelle took on complex issues of patent law and distilled them into clear and understandable arguments that helped the Supreme Court see the patents for what they are. We need minds like theirs working to build good policy at the intersection of law and technology.”

Brandon will join Perkins Coie, where he will represent startups in Palo Alto this fall.

“My clients are absolutely going to deal with this issue,” he said. “That’s part of why I wanted to take this project.”

Working with the Application Developers Alliance was a plus as well, Lee said. The clinic partnered with the group after being invited to participate in a network of legal clinics helping app developers fight trolls, a group known as the Law School Patent Troll Defense Network.

“I saw a transformation in myself that I really liked. I didn’t know much about the more technical aspects of this area, but the App Developers Alliance’s passion was contagious, and it felt great to be come well-versed in such a complex but important area of the law,” said Lee, who will work this summer for Hahn & Hahn.

The clinic ultimately hopes the Supreme Court will find the patent in CLS Bank invalid and that the case will add to the growing crescendo of voices, from the president to the FTC to Congress, seeking reform of the patent system.

“It’s so far from a level playing field, and that’s why the clinic stepped in,” said Jack Lerner, director of the law clinic. “We realized that these app developers needed someone who can fight for them.”

President Carol L. Folt encourages USC’s newest undergraduate and graduate students to become part of the search for innovative answers to the problems of our time.

The Engineering in Society Program aims to equip USC Viterbi students with the ethical and communication skills to flourish in an ever-accelerating world.

Results indicated a 94% pass rate for USC Gould alums taking the California bar exam, placing the law school in the top three in the state.