To the casual observer, the 14-year-old kicking a ball around in the park with his friends looked like he had energy to burn. But the boy has Type 1 diabetes, a chronic debilitating autoimmune disorder that commonly manifests in the early teens.

Because his pancreas is unable to produce the glucose-regulating hormone insulin, the teen must give himself daily insulin shots.

But while this treatment helps keep hyperglycemia — too much blood sugar — at bay, it puts the teen at risk of repeated episodes of hypoglycemia, or too little blood sugar.

While the boy’s nondiabetic friends, after experiencing a natural blood sugar drop during exercise, might instinctively reach for a sugary drink to return their blood glucose levels back to normal, the diabetic teen does not. This is because insulin treatment can sometimes cause diabetics to be unaware when they are sinking into hypoglycemia. As a result, the teen could slip into a coma and die.

“While most of us perceive hypoglycemia as a nuisance which may make us feel fuzzy-headed or causes us to lose some motor control, if severe it can actually cause convulsions, coma and even death,” said Casey Donovan, professor of biological sciences at the USC Dornsife College of Letters, Arts and Sciences. “And unlike hyperglycemia or diabetes, which take many years to become lethal, the severe complications of deep hypoglycemia can develop within hours.” 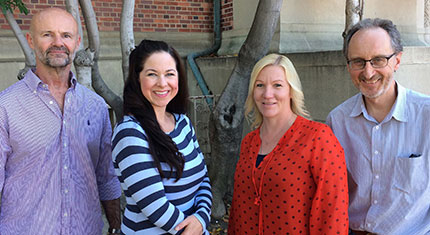 For the past seven years, Donovan and USC Dornsife neuroscientist Alan Watts collaborated on research into the central or physiological mechanisms that are important in normalizing blood glucose levels. The research is supported by the National Institutes of Health and the Juvenile Diabetes Research Foundation.

Their groundbreaking new research focuses on identifying the mechanisms involved in detecting hypoglycemia. Each of their findings, which could have far-reaching consequences for the development of insulin therapies for Type 1 and Type 2 diabetes, is presented in two papers published together online on April 11 and 16 in the journal Diabetes.

Currently, more than 371 million people worldwide have diabetes. By 2030, the number is expected to increase to 552 million, according to the International Diabetes Federation. The Centers for Disease Control and Prevention reports that nearly 26 million Americans are diabetic. The amount spent on health care costs related to diabetes in the United States alone is more than $245 billion, according to the National Institute of Diabetes and Digestive and Kidney Diseases.

The paper by Donovan and Watts’ team is the first to link peripheral glucose sensing with brain activation during hypoglycemia, a critical step in allowing the body to restore normal blood sugar levels.

“Diabetes is one of the leading causes of death,” Donovan said. “Hypoglycemia is important because it is currently the primary limitation in treating insulin-dependent diabetics.”

Insulin moves glucose out of the blood stream and locks it up as glycogen in liver and muscle tissue where it can be used for fuel. This in turn lowers levels of glucose in the blood. 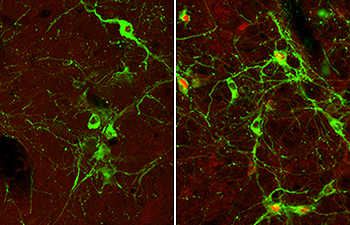 Microscopy images of neurons in the hindbrain (Courtesy of Alan Watts)

However, as Watts, professor of neurobiology, warned, insulin therapy itself can be problematic.

However, a trend toward more aggressive treatment of diabetes is inducing more hypoglycemic incidents. The end result, Donovan said, is a vicious cycle.

The root of the problem, Donovan said, is that the body becomes increasingly unable to detect that blood sugar is low.

“Our goal is to understand how the body detects the onset of hypoglycemia and utilizes that information to restore blood glucose levels, so we can improve existing therapies or develop new ones.”

For more than 100 years, it was believed that hypoglycemic detection occurs exclusively in the brain. But about 20 years ago, Donovan and colleagues began providing evidence of critical peripheral sensors located in the portal mesenteric vein — large veins that drain the intestines and provide the bulk of blood flow to the liver before it goes out into general circulation.

Although it is now generally accepted that we have peripheral as well as central sensors, how — or even if — the two interact and what their respective roles are was largely unknown.

The first paper, by lead author MaryAnne Bohland Matveyenko, “is the first to show that there is a direct functional connection between blood glucose sensing of slow onset, or clinical, hypoglycemia, and brain activation,” Donovan said.

During their research, Bohland, Donovan and Watts mapped the hindbrain and the hypothalmus. Focusing on the hindbrain, they found that if sensory input from the portal vein is eliminated, there is very little activation in the hindbrain during slow onset hypoglycemia.

“This clearly shows that the brain can’t detect hypoglycemia under most physiological conditions unless it has this peripheral input,” Donovan said. “But neurons in the hindbrain continue to respond to fast onset hypoglycemia even in the absence of peripheral sensors.”

The researchers also confirmed that the spinal cord is the actual physical route by which information from the portal vein travels to the hindbrain, overturning the previous belief that it was transmitted via the vagus nerve.

In the second study by lead author Anne Jokiaho, “we then found that a major neuronal connection between the hindbrain and the hypothalamus is not needed when you experience a fast drop in glucose,” Donovan said. “But it’s absolutely essential in slow onset hypoglycemia.”

This is the first time a brain component has been shown to be involved with these different types of hypoglycemia.

In the end, the complications of managing insulin therapies represent a major problem and getting it right is absolutely critical for people with diabetes.

“This research could have far-reaching consequences for the way treatments are developed, particularly for treatment-induced hypoglycemia,” Donovan said.

The risk of liver damage is highest for people who are obese or have diabetes, a Keck School of Medicine of USC study found.