Students with the USC Gould School of Law’s International Human Rights Clinic (IHRC) met with lawmakers in Washington, D.C., to advocate for legislation and executive action to address the widespread sexual violence and mass atrocities in Sudan and the Congo.

Amani Floyd, John Korevec and Kelsey Perry presented position papers at a three-day conference organized by Jewish World Watch and the Enough Project’s Hear Her Voice campaign, which urged support for peace and justice. They also met with survivors of genocide in the region.

The students participated in several meetings on Capitol Hill with congressional members or their staff.

“They expressed a genuine interest in the congressional bills we highlighted for them,” Perry said. “We spent most of our time emphasizing specific, measurable steps that they could take to make a real impact. We had a very positive experience in our meetings and are optimistic that the information we shared will be considered and valued.”

The students also sat on a panel moderated by USC Gould Professor Hannah Garry, director of the IHRC, that addressed more than 100 delegates on transitional justice mechanisms. They were the only law students to join the panel, which included Obama administration officials, United Nations representatives, former ambassadors, senior human rights advocates, legislators and survivors from Sudan and the Congo.

Floyd, who is interested in pursuing human rights law after she graduates, said she was given the opportunity to put her research, analytical and communication skills to use in ways that will “hopefully result in true change in the world.” 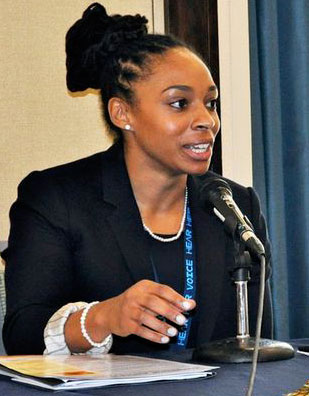 “This was an amazing experience that really brought home the reason why I went to law school in the first place,” she said. “I cannot emphasize enough how much I learned from participating in the transitional justice panel. Not only did I have to become an expert on Sudan, but I also had the opportunity to present possible solutions for the atrocities that are taking place there and engage policymakers about what more can be done to bring peace and security to all of Sudan and South Sudan.”

Korevec said that working with international human rights experts and survivors at the event was one of the most rewarding experiences during his time in the IHRC.

“Being able to participate in advocacy work that can have a real impact on people throughout the world helped make the legal work that we have done in the clinic very personal,” he said.

John Prendergast, co-founder of the Enough Project, and Gayle Smith, special assistant to President Barack Obama and senior director at the National Security Council, spoke after the panelists and encouraged young people to contribute to the human rights effort.

“It was inspiring,” Perry said. “The message was to follow a path that excites your mind, but also challenges your abilities.”

Garry said the event offered a real-world experience for her students.

“My students joined forces with the anti-genocide movement and made a powerful statement to our leaders about how important these issues are,” she said. “This advocacy experience provided them with a holistic understanding of what it means to do human rights work and complemented perfectly their casework in the clinic on prosecutions of mass atrocities before international courts and tribunals.”

Social work students join with the Keck Human Rights Clinic to advocate on behalf of asylum seekers by providing free evaluations, educating medical students and helping them gain experience as advocates for health and human rights.

The need for human rights in this global pandemic

After seeing how harmful COVID-19 is to vulnerable populations worldwide, the USC Institute on Inequalities in Global Health has launched efforts with partners at the global level and in countries in Asia, Africa and Latin America.