USC and UCLA will square off three times this week with more on the line than just city pride. The Trojans and Bruins will battle in women’s water polo, men’s tennis and women’s tennis, and all six teams are ranked in the Top 12.

The Trojans currently trail UCLA in the crosstown 2014 Gauntlet standings with 37.5 points to UCLA’s 47.5.

Here’s the schedule of showdowns this week:

The match will be carried live on Pac-12 Networks. The Women of Troy defeated UCLA 7-6 in overtime to win the UCI Invitational on Feb. 23 in the only meeting so far this season. USC is looking for its fifth straight win over UCLA.

The dual match will be carried live on Pac-12 Networks starting with singles play at noon. USC and UCLA are both undefeated in Pac-12 play, so Friday’s winner will be declared the outright conference regular season champion. 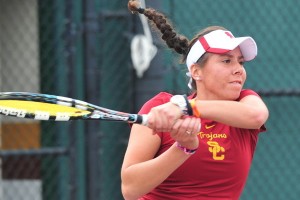 The Trojans and Bruins have split the season series to date. USC won 4-3 at the ITA National Team Indoors, while UCLA controlled the match in Westwood (5-2).

The dual match will be carried live on Pac-12 Networks starting with singles play at 2 p.m. The Bruins have taken both meetings this season sweeping the Trojans at the ITA National Indoors and winning 5-2 at Marks Stadium in March. This is the regular season finale for the Women of Troy.

The title gives USC an automatic berth into the 2022 NCAA Tournament, the team’s 15th consecutive trip to the tourney.

USC leaves the Tokyo Games with 21 medals, including 11 golds — just one shy of its most gold medals ever in an Olympics.