For Shawn Cervantes, going back to school began as a personal desire to help her family, but it has since grown into a drive to change her community.

An Army wife for 25 years, Cervantes’ main role was caring for her three children during her husband’s multiple deployments. It was his last deployment in 2005 — when his vehicle was hit by an improvised explosive device —that led her back into the classroom.

“When he came home, he wasn’t interested in getting any type of care. He was an old Army soldier,” she said.

Eventually they separated, but with her two sons and daughter now grown and all active-duty Army soldiers, Cervantes wanted to pursue a degree that would help her help her family.

“I knew my children might have issues, so I wanted to go back to school and study psychology,” she said. “Aside from being there for them as their mother, I wanted to be able to understand them as soldiers.”

In 2011, she transferred from Sacramento, Calif., to the University of California, Santa Cruz, to finish a bachelor’s degree in psychology. Cervantes said the move was a bit of a culture shock for someone with her background.

“I didn’t realize I was coming to ‘Baby Berkeley.’ People here still protest the wars. They’re so liberal, so anti-war. For whatever reason, they think that’s the same as anti-veteran,” she said.

At first, she felt out of place. Soon, Cervantes realized that she could use her personal background to bridge the military and civilian divide on campus and within the city. 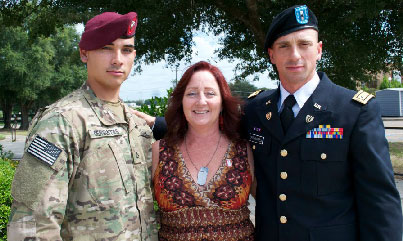 The MSW@USC student has taken the initiative to set up her field placement at the Walnut Avenue Women’s Center, a family resource center in Santa Cruz, where she has pushed for a women veterans program to help the underserved population. Cervantes launched a weekly women veterans safety support group in March.

“Heroic Hearts” focuses on developing healthy coping skills and building safe thinking, behaviors, emotions and relationships. The group allows members to freely discuss issues of substance use, sexual trauma, post-traumatic stress disorder and any other issues they may be facing. Cervantes would like to see it become just one of many programs offered to local women veterans, including the urgent need of housing and shelter services for homeless women, in partnership with the Santa Cruz Veterans Resource Center.

Cervantes doesn’t think it was mere coincidence that she ended up in Santa Cruz and in a position to help a cause close to her heart. She has embraced her new home and credits the MSW curriculum for helping propel her projects.

“I’m just really grateful that USC has this program that can tell me what I need to know,” she said.