Recognized for his outstanding contributions to the fields of paleobiology and paleoecology, Professor David Bottjer has earned an award from the Society for Sedimentary Geology (SEPM), an international, nonprofit society based in Tulsa, Okla.

Bottjer, professor of Earth sciences, biological sciences and environmental studies at the USC Dornsife College of Letters, Arts and Sciences, received his medal at a ceremony in Houston on April 8.

Nominees for the Raymond C. Moore Medal, named after the early paleontologist who helped establish the society, are chosen based on a significant body of work that supports a major objective of SEPM — the promotion of the science of stratigraphy through research in paleontology and evolution, and the use of fossils for interpretations of paleoecology.

“The SEPM Raymond C. Moore Medal for excellence in paleontology has been awarded since 1980 and the past winners are really a ‘who’s who’ of paleontologists,” said Howard Harper Jr., executive director of the society. “The awardees are chosen by a committee of peers, with nominations made by geologists from around the globe. Dr. Bottjer was selected by the committee from a pool of over a dozen well-qualified nominees for the 2014 award.”

Mary Droser ’87, Bottjer’s former student, who earned her PhD in paleontology, added: “Few have ever tackled the range of topics in paleobiology and sedimentology as David Bottjer and made such timely contributions. He continues to push the boundaries of paleobiology and sedimentary geology. He is known among his students — present and past — as a generous, insightful, successful and abundantly enthusiastic mentor and for those students who have gone on in academics, he serves as a lifelong role model.” 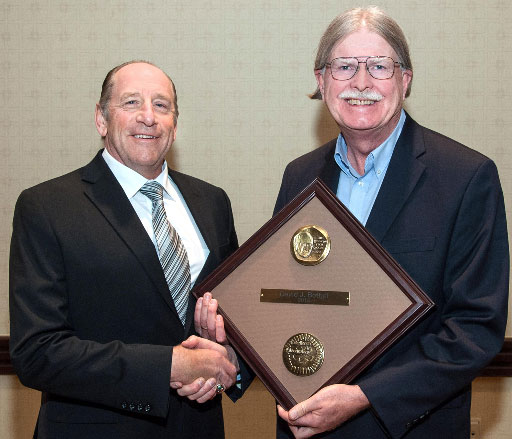 Paleontology, the scientific study of prehistoric life, analyzes fossils to determine how organisms evolved and how they interacted with each other and their environments — the latter known more specifically as paleoecology. Paleontology uses techniques from a wide range of sciences, such as molecular biology, mathematics and engineering, to delineate the evolutionary history of life on Earth, which dates back about 3,500 million years.

“This is arguably the top award in my field, so I was very gratified when I got the news,” Bottjer said. “I got a call from the president of the society completely out of the blue, so it was a very warm, glowing feeling.”

The ecology of evolution

Bottjer’s career has focused on two primary questions. One, he is trying to understand how early animals evolved on Earth and how Earth’s ecology changed as these evolving animals came to occupy many different types of habitats.

Second, he and his students are looking at the “less positive side” of evolution and life on Earth by examining some of the fossil record’s major mass extinctions, which occurred at moments in history when environments on Earth became very harsh, causing animals to die out at an accelerated rate.

Bottjer has worked broadly on organism-sediment interactions and the ecological history of life. His research has taken a multidisciplinary approach to understanding the paleobiology and paleoecology of early metazoan life, and to this end, he has conducted field work in eastern California and China.

More specifically, he and his colleagues are seeking a detailed understanding of the paleoecology of the “recovery period” following the end-Permian and end-Triassic mass extinctions, encompassing extensive work on Triassic strata throughout the Western United States, Europe, South America, Japan and China. The latter research has led to his involvement in helping to develop the Paleobiology Database, a large Web database used to solve major outstanding paleobiological and evolutionary problems.

Through its network of international members, SEPM is dedicated to the dissemination of scientific information on sedimentology, stratigraphy, paleontology, environmental sciences, marine geology, hydrogeology and many related specialties.

And the Microbes Shall Inherit the Earth

Global warming is not a novel phenomenon, and by studying what happened to the planet during a period of global warming about 250 million years ago, one USC scientist hopes to discover what could happen to us this time around.

Blurring the lines between Earth and life

For decades, “geo” and “bio” have been seen as separate disciplines. No longer. In the past few years, USC has become the center of the emerging field of geobiology, involving rock-eating bacteria and intra- and extra-terrestrials.

Earth’s past is a warning for the future

Too much carbon dioxide in the atmosphere will make the oceans more acidic and imperil key parts of the marine food chain – it has happened before and can happen again, scientists warn.