That pang of longing hits you after reading the last word in a great novel. You don’t want to close the book.

Yes, literature and storytelling are alive and well, despite reports to the contrary. Witness the Los Angeles Times Festival of Books on April 12 and 13, which drew roughly 150,000 to USC’s University Park Campus. Panel discussions on books, poetry readings, talks from thought leaders, live stage performances and music testified to the unifying power of the humanities and arts. Faculty from the USC Dornsife College of Letters, Arts and Sciences, in particular, shared their passion for cultural exploration and provocative discussion.

“Music provides the soundtrack to our lives,” said Varun Soni, USC dean of religious life, who moderated the discussion. “Think of the most formative moments of your life, your most cherished occasions, most difficult experiences. It’s likely a popular song is associated with that memory.”

The same is true for individuals and communities, he said.

Redmond said her book Anthem: Social Movements and the Sound of Solidary in the African Diaspora (New York University Press, 2014) is about how music becomes a method for social change. 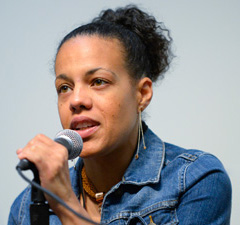 “Ultimately, what I figured out is that music is a politic,” Redmond said. “The music we choose to listen to and the music we mobilize in our political communities is in itself a manifesto.”

When she was writing the book, something someone once mentioned stayed with her, she said: Writing about music is like dancing about architecture.

“This still haunts me,” she said. “Well, I think that’s a pretty amazing project. I think everyone should dance about architecture. I took it as a real challenge to think about how best to translate the music.”

To bring the anthems to life, she includes a mixed tape of the seven songs described in the book. She has her own students sing the anthems and read the sheet music.

Music should be a call to action, she urged. And when a festival audience member spoke up and lamented a lack of funding for music in schools, Redmond said that young people will always find a way to express themselves through music. “The absence or withdrawal from funding in our schools is where hip-hop comes from,” she said. “They can’t learn the brass instruments in their schools anymore so they take the electricity to the streets.” 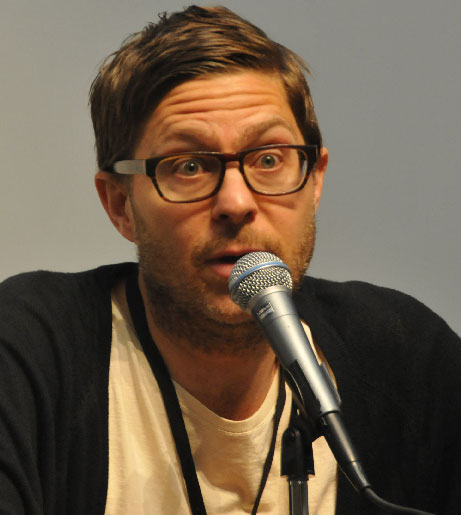 Written in 1959 by Jay Livingston and Ray Evans, “Angeltown” was adopted as the official song of the city of L.A. in 1966.

“It’s L.A.’s official anthem and probably no one has heard it,” he said. “The song looks at L.A. like it’s the 19th century. What we found looking at this collection was this tension, this battle between the myth of the sunshine and unspoiled paradise of L.A. and multiracial, multicultural Los Angeles.”

He said “Angeltown” — with lyrics like “valley green, mountain white, ocean blue and beaches bright; heavenly just to be in Angeltown” — show that a single idea or community can never represent L.A.

“We need multiple songs being made every generation and all the time,” he said. “This is as much about singing songs as a call to action. This is about our jobs as listeners. How we listen to the voices of other people and what we do with their stories and songs and experiences that we consume every day from other people’s voices. We have to embrace the fact that we need multiple voices.”

Another panel addressed the blur between truth and fiction across genres. Participants included University Professor Leo Braudy, holder of the Leo S. Bing Chair in English and American literature; Dana Johnson, associate professor of English, both of USC Dornsife; and Mark Jonathan Harris, Academy Award-winning documentary filmmaker from the USC School of Cinematic Arts. Author Janet Fitch of the Master of Professional Writing program at USC moderated the panel.

Braudy, a cultural historian, spoke about writing his memoir Trying to be Cool: Growing up in the 1950s (Asahina and Wallace, 2013).

“On the cover it says in red letters, ‘based on a true story,’ ” Braudy said. “Anytime you write a memoir, it’s about memories. It’s what I remember happening; it’s the people who I remember. I don’t want to claim that it’s true in the absolute sense.

“I tried to balance the naïve somewhat hapless me in my teenage years with another voice that will every once in a while stand back and give a larger context of what’s happening.”

For instance, the book talks about the Cold War, the birth of rock ’n’ roll and the popularity of science fiction monster movies.

“All of these things that were going on in American culture,” he said. “I tried to merge the emotional truth with the factual truth.” 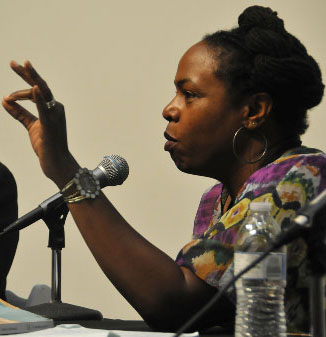 Johnson’s debut novel, Elsewhere, California (Counterpoint Press, 2012), holds many parallels to her own life. She and her character graduated from USC. Both were born and raised in South L.A. Both moved to West Covina. Differences are there for good reason.

“My own roommate in college was a blonde surfer born and raised on the beach,” Johnson said. “It sounds cliché, yet it was true. So I made the roommate of the main character, who comes from a working-class family, African-American and wealthy. This makes it more of an interesting question about race and class.”

Fitch said that in the end, there is no such thing as truth in writing without a point of view.

“There’s fact and there’s truth, and they are not necessarily the same thing,” Fitch said. “In nonfiction you’re looking for the truth that’s something larger than facts. Facts can be anything, the color blue is a nice color or not. Fiction writers zero in on the truth from one side, and nonfiction writers or documentarians do it from another side. They are taking all of these fragments and creating the truth.”

Among the other USC Dornsife panels and appearances:

Why Ada Limón is a U.S. poet laureate for the 21st century

USC Dornsife’s Amy Cannon considers the groundbreaking poet, who explores “what it looks like to have America in the room.”