From Gutenberg to Zuckerberg, the evolution of the written word continues, and the Los Angeles Times Festival of Books is keeping pace. The nation’s largest literary festival took its 19th bow over the weekend, preserving some traditions and exploring new wrinkles.

“We are really proud to host this festival for the fourth year,” said Sayles, noting that 150,000 guests were expected to attend. “USC easily serves as home to the festival because the campus pulsates with intellectual energy, curiosity and vitality,” he noted.

“This is the Times’ gift to our community,” Hartenstein added, “and it promises to be a wonderful combination of ideas and creativity.”

Celebrities of the pen

By noon, Green fans serpentined through Associates Park, waiting in the bestselling novelist’s book-signing line. Some dead-tree traditions appear timeless — among them the excitement of seeing a beloved author jot a personal note on the fly-leaf of one’s very own print edition of The Fault in Our Stars.

“It’s my favorite!” gushed Emily Street of Toluca Lake, Calif. Earlier that morning, she had scribbled the title on one of the festival’s graffiti walls. These interactive spaces invite readers to recommend their favorite books. Elise’s father, Deron, had recommended Hot Water Music, by Charles Bukowski. “We have different taste in books,” he said wryly.

A few feet away, eighth-grader Jillian Reed of Los Angeles wrote Looking for Alaska, Green’s first novel, while her friend Katherine Elias gave her nod to The Book Thief by Markus Zusak.

Over by the Poetry Stage, in bucolic Founder’s Park, live recitations of stanzas caressed the ears, and booksellers displayed handsome bound editions of verse. 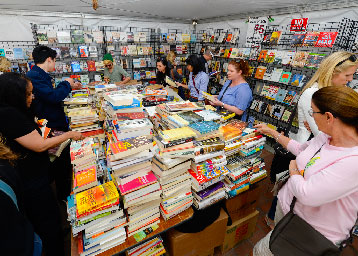 Used-book stalls dotted the festival, and readers combed through $3 paperbacks and $5 hardcovers in search of literary treasure.

Famed Los Angeles booksellers Skylight and Vromans transported a portion of their inventory to USC, helping transform Trousdale Parkway into a printed-word bazaar where Harvard University Press pressed up against the Ayn Rand Institute and C-SPAN2’s Book TV.

On a stage in front of Doheny Library, actress-turned-author Alicia Silverstone chatted with L.A. Times health reporter Mary MacVean about her new book, The Kind Mama, on fertility, pregnancy and childbirth.

“There are so many choices now,” she told the large Alumni Park crowd. “The status quo is not the only way to go.” She might just as well have been talking about the literary scene.

A festival for all Los Angeles

Nearby, “book buddy” Nathan Werner was hoisting children onto Traveler. Mounting the life-sized bronze horse “is a USC tradition,” the USC physics and theater major said, as his young charges clambered on board. They had come to the festival from skid row via School on Wheels, an organization providing free services to homeless children.

In the USC Civic Engagement booth, a crowd of preschoolers admired George Tirebiter, hero of Big Dog on Campus Learns to Be a Trojan. They listened and laughed as author Oliver Mayer, a USC dramatic writing professor, and illustrator Patricia Rae read aloud from their book. 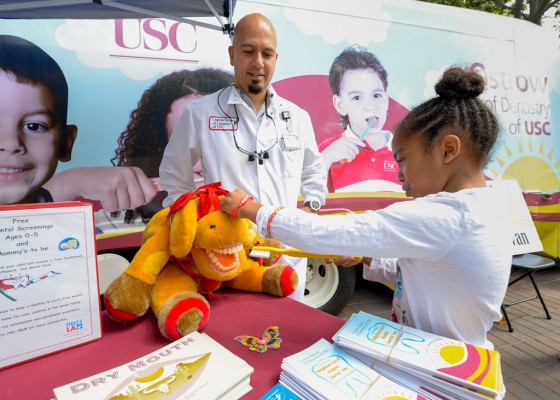 Meanwhile at a booth hosted by the Ostrow School of Dentistry of USC, 7-year-old Jada Sabun of Culver City, Calif., brushed up on her tooth-brushing technique. A book festival veteran, she’s been coming every spring since the age of 3, her proud father said.

Upwards of 500 children and adults get dental screenings over the two-day festival, and hundreds more receive referrals and oral hygiene instruction, according to Carlos Sanchez ’08, an Ostrow School clinical faculty member. In some cases, the screenings will turn up infections and abscesses, periodontal disease, rampant decay and even lesions associated with oral cancer, he said.

Nearby, dermatologists from the Keck Medical Center of USC stepped into private booths to examine suspicious moles and skin lesions. As the mid-morning sun broke through overcast skies, festival-goers snapped up the booth’s complimentary sun-screen samples. 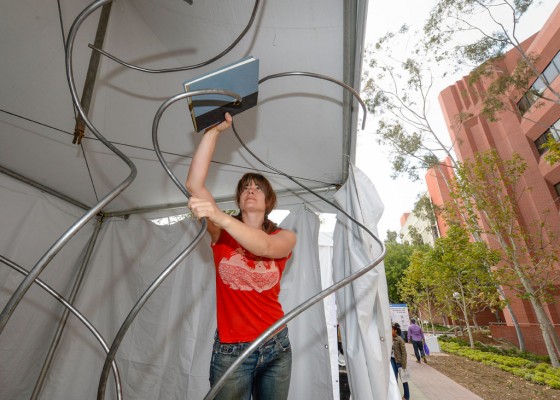 Jena Priebe was assembling an as-yet unnamed sculpture that stood 20-feet high. Priebe methodically drilled holes through discarded hardcover books and laced them like giant beads onto a tree-like structure of welded metal spiraling up from a base of recycled doors. The piece, she estimated, would take 14 hours to complete.

Alongside the professional artists was the “collaborative muraling” project of Young Summers and Ann Zumwinkle, winners of the festival’s “Inspire Your Fire” art competition. The two women urged passersby to dip paintbrushes in black ink and add their own words and doodles to a continuous scroll of impressions. Prizes in music performance, photography, stand-up comedy and poetry reading were also awarded to talented amateurs.

While books remained the centerpiece of the festival, the advancing tide of technology was hard to miss. In a Hoffman Hall panel discussion, USC faculty wrestled with thorny problems surrounding youth literacy in a digital world. Scholars from engineering, cinematic arts, education and communications all weighed in. Perhaps the most arresting was media artist Samantha Gorman, a USC doctoral student in cinematic arts who is experimenting with “a new type of reading experience for the digital space.”

Gorman showed a demo of Pry, her hybrid novella composed for tablet media.

“Most e-books start out as traditional books and are then translated or uploaded to the screen,” she explained. “But what would a book look like if it were written from the beginning for the tablet?”

Readers could experience the world of Gorman’s protagonist, James, a Gulf War veteran, at many levels. They could observe the mundane objects before his eyes. Or they could probe his inner thoughts through lines of text that expand and collapse like the folds of a fan. They could relive his memories through video flashbacks and even “read” his mother’s Braille Bible.

Panels like this and other thought-provoking conversations challenged this year’s festival-goers to consider the changing landscape of the written word. But whatever the future brings, it’s a safe bet that tomorrow’s texts will still command our attention and stir our emotions.

His arms covered in tattoos, Nathan Hunter, a part-time chef from La Habra, Calif., summed it all up with the quote emblazoned on his plain black T-shirt:

More stories about: Festival of Books

“All of you here this morning should take great pride in the fact that we are part of the largest public literary festival in America.” With those words, USC president C. L. Max Nikias kicked off the 17th annual Los Angeles Times Festival of Books on April 21.

Is this the golden age of public libraries?

Conversation at the California Club ranges from the evolution of the public library to the effect of technology on libraries.

The Andrew W. Mellon Foundation has been a long-standing benefactor to USC, supporting, in addition to this gift, a wide array of university initiatives.