Ron Avi Astor’s social work career started out with a series of coincidences.

As a Master of Social Work student at USC in the 1980s, Astor, now the Richard M. and Ann L. Thor Professor of Urban Social Development at the USC School of Social Work, discovered that his father had also attended the school by coming across his thesis while performing research in a USC library.

His father, who died of a heart attack when Astor was a child, wrote his thesis on the impact of wives whose husbands had been hospitalized due to cardiac illness. And his father and Richard Thor, the benefactor of the professorship Astor holds, were classmates.

But Astor’s accomplishments are certainly not the result of matters of chance. Over the last three decades, he has worked to become an internationally renowned expert in school violence and safety. For his work, which has helped millions of students, teachers, parents and school administrators, the California Social Welfare Archives presented Astor with the George D. Nickel Award for Outstanding Professional Services by a Social Worker at the Galen Center.

“Imagine all the events he has helped prevent, all the lives that have been saved and all the kids who have not been bullied because of his work,” said Executive Vice Dean R. Paul Maiden, who presented the award.

Astor’s work examines the role of the physical, social-organizational and cultural contexts in schools related to different kinds of school violence.

Over the past 10 years, his findings have been published in more than 150 scholarly manuscripts. His book, School Violence in Context: Culture, Neighborhood, Family, School and Gender, has been described by leading scholars in psychology, social work and education as the most comprehensive theoretically and empirically sound study of school violence conducted to date.

Astor developed a school mapping and local monitoring procedure that has received several international awards. The procedure is now used in schools across the globe, including Los Angeles and Tel Aviv, Israel, with students and teachers generating grassroots solutions to safety problems.

“The homegrown practices are really important for us. We believe that there are social workers, teachers and principals who have really good ideas, maybe even better than ours at the university system,” he said in his keynote speech. 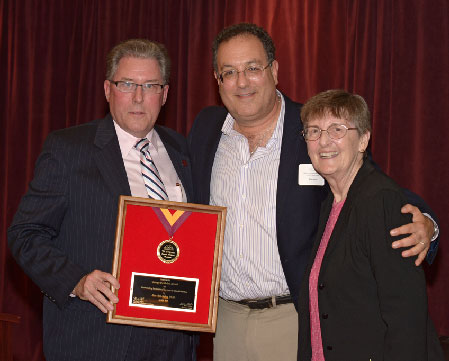 Astor has served as co-chair of a national blue ribbon bullying task force that produced a series of 11 briefs titled “Prevention of Bullying in Schools, Colleges and Universities,” which present short-term and long-term strategies to address bullying of children and youth.

The researchers contend that the term “bullying” is being overused and applied to everything from eye-rolling to criminal behavior. Astor and his colleagues urge school and college administrators to use the term “victimization” instead, among other recommendations.

Now Astor is applying knowledge gained from these prior studies to improve school climate in military-connected schools. As principal investigator, Astor and his colleagues are leading a Department of Defense Educational Activity funded-research partnership with eight Southern California school districts. The Building Capacity in Military-Connected Schools project has been working to create a national prototype for sustainable infrastructures that empower staff, students and parents to use evidence to improve school climate and address military students’ special needs.

The project has called upon the help of USC MSW students, some of whom perform their field internships with the collaborative’s schools, incorporating hands-on learning experiences for those interested in practicing military social work, an area of emphasis for the School of Social Work.

“Ron is what I call a lifer. He was born into USC,” said Maiden, who also noted that he wasn’t able to read the thesis of Astor’s father because it had been checked out since 1986 — to Astor.

“When you realize your time is limited, then every day and every life that you can help become precious. At the end of the day, why we’re here matters,” Astor said. “That’s why I keep that thesis, too.”

Ron Astor, the Richard M. and Ann L. Thor Professor in Urban Social Development at the USC School of Social Work, was awarded an honorary doctorate from the Hebrew Union College-Jewish Institute of Religion during its Los Angeles graduation ceremony on May 17.

Media coverage of mass school shootings in recent years has led the public to believe school violence is on the rise, when it is in fact at its lowest levels in decades.

The USC Center for LGBTQ+ Health Equity focuses on research and education to help close gaps in health care for the community.

The 2019 NCAA 400-meter hurdles champion — who has a 4.0 GPA in her public policy graduate program — is USC’s only Team Member of the Year honoree since the College Sports Information Directors of America began the award in 1996.