Four professors at the USC Dornsife College of Letters, Arts and Sciences have been selected for yearlong research or writing fellowships that will take them as far as India and Italy. The research topics won over hundreds or, in some cases, thousands of applications worldwide.

Professors Joseph Boone, Macarena Gómez-Barris, María-Elena Martínez and James McHugh have received fellowships from some of the most competitive funders in the world, including the National Endowment for the Humanities, the Fulbright Program, the American Council of Learned Societies and the Stanford Humanities Center, he said.

“This support will allow them to make vital progress on the kinds of research that garners wide attention for themselves and for USC,” said Mancall, also director of the USC-Huntington Early Modern Studies Institute. 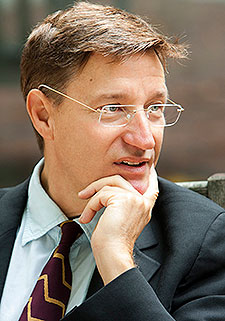 In the late 1990s, English Professor Joseph Boone and his brother, Benjamin, began composing Con-Man, a musical based on Herman Melville’s novel The Confidence Man and produced at USC in 2010 through Visions and Voices. The project has grown into something much larger for Boone, who was awarded a fellowship through the Stanford Humanities Center and a USC-Huntington Early Modern Studies Institute summer fellowship. His most recent book, The Homoerotics of Orientalism (Columbia University Press, 2014), was released in March.

Boone has dubbed his current project “The Melville Effect.”

“Our musical made me hyper-aware of the number of artists, working in multiple disciplines over the last two to three decades, who have turned to Melville as a muse or source of inspiration,” Boone said. “Sometimes they do direct adaptations, but more often they use him as a springboard for often avant garde artistic productions.”

“I suspect that Melville’s layering of multiple genres and formats in his novels is a primary reason that contemporary artists who are mixing lots of art forms together are attracted to him,” Boone said of why contemporary artists are turning to Melville now, more than a century after the author’s death.

For his summer fellowship, Boone will tap into the resources in Pasadena’s Huntington Library, Art Collections and Botanical Gardens to study popular culture in the 19th century.

“I want to immerse myself in the things that were floating around in Melville’s time,” Boone said.

For the yearlong Stanford fellowship residency, Boone is excited about meeting researchers in diverse fields.

“I’m looking forward to joining a little community,” he said. “It is very special the way that you bond with people across disciplines you might not have met otherwise.” 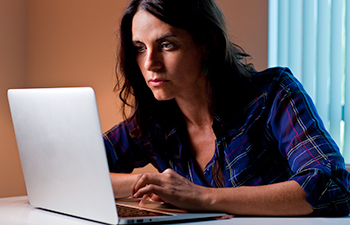 Gómez-Barris, associate professor of American studies and ethnicity, was granted a Fulbright fellowship to complete her book on capitalism and indigeneity in South America.

In Quito, Ecuador, she will work at the Facultad Latinamericana de Ciencias Sociales (FLASCO) through June 2015, conducting research on the politics of oil and eco-tourism — controversial areas regarding indigenous peoples and territories.

Gómez-Barris has already drafted chapters for her book on Bolivia, Peru and Chile. Her final chapter, focusing on Ecuador, will investigate struggles over territories and primary resources — such as land and oil — over a 40-year period marked by South America’s adoption of neoliberalism, a system that advocates free trade and open markets.

“My research analyzes how indigenous people have responded to oil extraction in their countries,” she said. “At the same time, ecotourism — which has been on the rise in the Andes, and particularly in Ecuador, supposedly offers land conservation opportunities. However, the question is always for whom.”

Her study addresses how indigenous modes of living suggest other possibilities inside and outside of capitalism.

“I will investigate indigenous social movements, as well as the less detectable instances of cultural and social resistance,” she said.

From previous research in Bolivia, Gómez-Barris knows that world views based on ecology and the finiteness of Earth’s renewable resources have challenged the limits of human rights.

“While the U.S. political and scientific communities have been focused on documenting the degree of global climate change without dramatically altering its current course, indigenous peoples from throughout the Américas, including the U.S., have been ahead of the curve,” she said. “My work in the book has been to document how indigenous communities, scholars and artists have historically thought about our planet’s future and created models that function differently from those based on privatization, extraction and accumulation.”

Gómez-Barris will present her findings to scholars in South America through a graduate and faculty seminar.

“I applied to be in residence at FLASCO-Quito because my colleagues there have done cutting-edge research on political ecology, future-oriented worldviews and indigenous claims together,” she said.

“FLASCO-Quito has become an important location for thinking about decolonization in the Américas, incorporating feminist and ‘queer’ approaches throughout,” she said. “My research for this fellowship will benefit from being in dialogue with FLASCO scholars working in the areas of sociology, gender studies and cultural studies.” 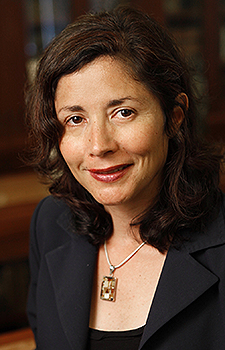 Martínez, associate professor of history and American studies and ethnicity, was awarded fellowships from the Stanford Humanities Center and the National Endowment for the Humanities. She will develop her book on the effects of new scientific ideas on notions of race and sex in 18th-century Spain and Spanish America.

To write The Enlightened Creole Science of Race and Sex: Naturalizing the Body in the Eighteenth-Century Spanish Atlantic World, she will spend the year at Stanford University.

Enlightened Creole is an extension of her first book about ideas of blood purity and race in the early-modern Spanish Atlantic world, which examined “how religion provided the epistemological foundations for racial discourses in Spain and colonial Mexico.”

For her book focusing on the 18th century, Martínez has been conducting extensive research in Mexican, Spanish and U.S. archives.

In part, her study is based on manuscripts written by 18th-century Creoles — descendants of Spaniards living in Spanish America — who used scientific theories to account for differences in skin color, sex and sexuality.

“I am also examining criminal cases of sodomy, hermaphroditism and gender transgression that reveal the strong links that legal and medical authorities made between what they termed ‘unnatural’ sexual acts and physical ‘deviancy,’ ” she said.

“More generally, I’m exploring how science and certain Enlightenment ideas were being used to craft new notions about racial and gender difference, and to subvert or challenge colonial hierarchies,” she said. “I am also trying to explain why certain theories prevailed over others.”

Among the most striking aspects of the 18th century are the extent to which the causes of race and sex difference and the relationship of behavior and the body were debated, she said.

“Cultural and political elites had an enormous obsession with classifying not just plants and animals but humans as well.”

Martínez’s research will illuminate how enlightenment thought and other 18th-century intellectual and social developments influenced explanations of sexual and racial differences. It will also reveal some of the legacies of racial and sexual colonial discourses on post-independence Spanish American societies. 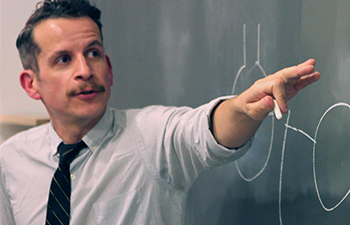 Call this extreme bar hopping. For his fellowship from the National Endowment for the Humanities, McHugh, assistant professor of religion, will travel to India visiting towns to research various wines, beers and spirits that date back many centuries.

McHugh’s upcoming book, An Unholy Brew: Alcohol in Indian History and Religion explores the ambiguous presence of alcohol in India — from its prohibition to its royal drinking games, aphrodisiacs and traditional medicine. McHugh was among 72 of 1,085 candidates accepted this year. He was also offered a prestigious American Council of Learned Societies fellowship.

While conducting research for his previous book about smell and perfume in India, McHugh became interested in Indian medicine, substances and pharmaceuticals. McHugh found a book on 12th-century royal life in India that talked about drinking games and parties.

“Typically, it was understood that alcohol consumption in India was frowned upon — or even generally forbidden,” he said. “But here was this kingly text getting into a lot of detail about this drinking party. It had descriptions of all sorts of drinks made from fruits and grains and palm saps.”

McHugh was surprised by how highly developed the alcohol culture in India seemed to be.

“I started looking into what one could find out about alcohol in early medieval India, and I realized that there wasn’t much about it,” he said. “The articles I found tended to focus more on prohibitions, so I thought it would be a fruitful endeavor to focus more on the culture of alcohol that did exist to bring this highly complex topic together.”

At the Harvard Library, McHugh will research Sanskrit texts, then travel to India to consult with scholars, look at art historical material — such as sculptures of people drinking — and add in an element of ethno-archaeology. That is, seeking out people who still practice various old-school techniques to learn old recipes and terminologies.

“I’m excited to travel and have the opportunity to experience some of what I’ve researched firsthand,” he said.

The book describes how Lawrence Halprin shaped American cities during the social tumult of the 1960s.

Patrons of the pages conserve rare books at USC Libraries

Looking for a unique gift? Consider an old book — like, say, a 1677 edition of Thomas Hobbes’ Latin translation of Homer’s poems “Iliad” and “Odyssey.”

He captures the coolness of a bygone era

As a teenager growing up in 1950s Philadelphia, University Professor Leo Braudy’s free time revolved around hanging out with friends at the local soda shop, listening to rock ’n’ roll, watching horror films and thinking about girls.

From Melville to medieval India