During a recent lecture, Douglas Greenberg showed a slide of Anne Frank writing at her desk. Another slide showed the entrance to Poland’s Auschwitz-Birkenau death camp. A third showed the Warsaw ghetto.

“This is the common narrative, for Americans in particular, when they think about the Holocaust,” Greenberg told a packed audience at the USC Ronald Tutor Campus Center in March.

Greenberg, who from 2000 to 2008 served as executive director of the USC Shoah Foundation — The Institute for Visual History and Education, wants to change this limited narrative. He has returned to USC for an eight-week fellowship to research the “forgotten Holocaust” in the Ukrainian region of Volyn.

In 2008, Greenberg left USC to become executive dean of Rutgers University’s School of Arts and Sciences.

During his USC fellowship, which began in February, Greenberg continued a task he started at Rutgers: watching and listening to more than 500 English-language testimonies of survivors of the massacres in Volyn.

Returning to USC was a particularly profound experience for Greenberg, who led the USC Shoah Foundation when it moved to the university in 2006.

A genocide of bullets

During his lecture, Greenberg said he began his study for personal reasons — his grandfather was born in Równe, a city in eastern Volyn.

“But it immediately became a much larger study that ultimately revealed a side of the Holocaust that was forgotten — hidden completely from the public understanding of what happened in Europe [during World War II],” Greenberg said.

Located in seven countries over the course of the 20th century, Volyn is now in northwestern Ukraine, currently in conflict with Russia. Greenberg noted that he began his research well before the crisis in Ukraine. In his lecture, Greenberg spoke of the Holocaust in Volyn as a genocide of bullets, rather than of gas chambers.

He showed the audience clips from two interviews in the Visual History Archive, which contains nearly 52,000 testimonies from survivors and witnesses of the Holocaust and other genocides.

“People were shot — just like that — either in their homes or taken by horse and buggy or truck or walked to their deaths,” said survivor Bronia Hatfield in the interview.

Nearly 1.5 million people in Eastern Poland or Ukraine were killed in their hometowns.

“They never made it to any camp,” she emphasized.

These murders, Greenberg said, have been largely omitted from public discourse on the Shoah, the Hebrew word for the Holocaust.

“These deaths were local and public,” Greenberg said. “Even the ghettos of Volyn were not always walled or closed. Some people met their deaths at the hands of their neighbors, people they had known all their lives — and everyone was killed in the open, in front of their neighbors’ eyes. Sometimes, people would be killed first in the town square in order to terrorize all those who would then be marched to an open grave just outside the city and shot.”

Children often were killed first — as 6,000 were in Równe, he said.

“Jewish men were sometimes forced to dig the graves in which they and their families would be buried,” Greenberg said. 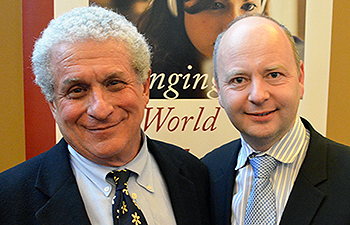 Greenberg, now Distinguished Professor of History at Rutgers, noted that Volyn was under Soviet control from 1939 to 1941.

“In 1939, the Germans invaded Poland from the West and quickly passed into Volyn, and the Soviets invaded from the East,” he said. In 1939, Hitler signed a “non-aggression pact” with Stalin over the region, and Volyn remained under Stalin’s control until the pact dissolved in 1941.

At the time, many Jews from Poland fled to Volyn to escape Hitler.

“They hid in the homes of righteous Jews who were willing to let them in,” Greenberg said. Many Jews in Ukraine, anticipating Hitler’s inevitable invasion of their country, fled East to Russia — surviving the Holocaust in work camps known as the Gulag.

“Fifteen thousand Jews, mostly men, were murdered within three months,” Greenberg said. “On Nov. 6 and 7 of 1941, 23,000 people were marched out of town in Równe and shot to death, falling into mass graves dug by Russian prisoners of war.”

The Nazis in Volyn met some resistance. In the fall of 1942, knowing that the Germans were en route, Jews in the town of Tuczyn burned down the city and fled.

In another videotaped interview, survivor Edith Kimelman recalled: “We saw from far away that the sky was very red, because what happened is that in Tuczyn they decided to burn the ghetto — not knowing who would survive and who would not. It was one of the very few towns to use that method to try to free themselves.

“It was very painful to remain alive,” she said. “I wanted to die, but I couldn’t.”

For those who escaped into the surrounding forest, most were killed by Nazis, starved or froze to death.

By January 1943, 250,000 Jews in Volyn had been murdered in 18 months. In the rest of Europe, 35 percent of the Jewish population survived the Holocaust, while the figure in Volyn was 1.5 percent. A major reason the story of Volyn has been forgotten is that there were so few survivors.

“Truly the Nazis in Volyn did what they intended to do,” Greenberg said. “They exterminated the Jews — not only from life, but from memory.”

Greenberg, who plans to turn his research into a book, emphasized the importance of a deeper understanding of the Holocaust.

“The challenge is to understand places like Volyn as the intermediate ground between the unfathomable horror of 6 million dead and the searing, but not generalizable, experience of single individuals,” Greenberg said. “It is a place where the horror of the Shoah is in full view, but contextualized geographically, chronologically and culturally.”

Productions are presented in conjunction with the U.S. National Days of Remembrance.

“My Armenian Story,” a program of the USC Dornsife Institute of Armenian Studies, encourages Armenians from Southern California and around the world to record their memories.

He won’t let the world forget the innocent of Volyn