USC and the Reserve Officer Training Corps go back a long way. The university celebrated that relationship — now in its eighth decade — with a special banquet held for 600 Trojan veterans and their spouses, ROTC cadets and their officers at the Westin Bonaventure hotel.

“Few if any universities can match USC’s commitment to the military and its service members,” President C. L. Max Nikias told the ballroom filled with dress uniforms representing all five branches on April 3.

The applause grew as Nikias named two more programs impacting Trojan service members: the Master of Business for Veterans degree, which will graduate its first class of 39 veterans in May; and the master’s concentration in military social work, which over the past three years has produced 450 professionals specializing in the mental health issues of veterans and their families.

Rituals, both sober and celebratory 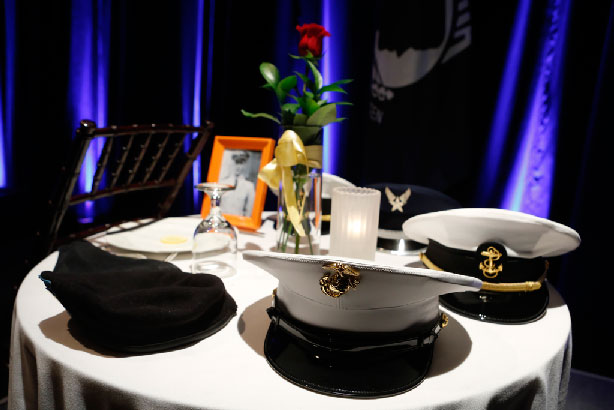 The annual Veterans and ROTC Students Appreciation Dinner is an opportunity for the university to honor its men and women in uniform. This year’s event struck chords both solemn and playful — from a stirring enumeration of the symbols at the unoccupied MIA and POW table to a mess-hall tradition called “Parade the Beef” that culminated in a cadet pronouncing the filet mignon “fit for human consumption.”

For musical entertainment there were service songs and marches, including “Stars and Stripes Forever,” performed by the 3rd Marine Aircraft Wing Band, and school songs like “Conquest” and “Fight On,” performed by the USC Trojan Marching Band.

Formal toasts from the head table and an invocation by Father James Heft set the stage for a moving speech on the spirit of service by keynoter Matt Runyon ’09, an Army ROTC graduate from the USC Leventhal School of Accounting.

From combat to disaster relief 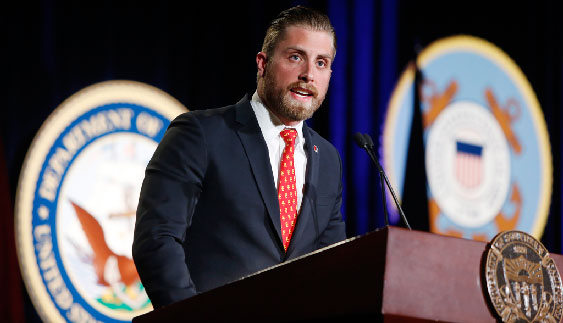 The Iraq veteran spoke fondly of his ROTC cadet days and recalled vividly the Easter Sunday in 2007 when he received notice that he was being deployed.

“I didn’t know how I was going to get my affairs in order with just two weeks to figure everything out,” he told the audience. “I was lost, scared. But I wasn’t alone.”

Runyon related how three of his professors had hustled so that he might complete his coursework despite missing finals, and upon his return, how USC Leventhal administrators had labored to ease his transition back to student life.

“I guess I should have expected nothing less,” Runyon said, “but I will never, ever forget how supported I felt by my Trojan family.”

Beaming in the ballroom 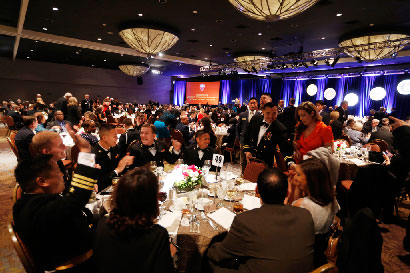 Among the guests were Maj. Mark Burrell, a Marine ROTC officer instructor who teaches amphibious warfare at USC, and his wife, Wendy Burrell ’98, a gerontology alum and Marine veteran. This was their first USC appreciation banquet.

“I’m all excited about it,” said Burrell, whose assignments have included guarding U.S. embassies in Moscow, Shanghai and Tokyo, as well as command posts in Helmand Province, Afghanistan.

“It’s an amazing event,” agreed Capt. Paul Alwine ’62, president of the USC Naval ROTC Alumni League. The Vietnam combat veteran with 30 years of service proudly noted that his alma mater has been associated with Naval ROTC since it was created in 1940.

“I always look forward to this dinner,” said Airman Luke Herriman, a fifth-year senior in aerospace engineering who hasn’t missed a banquet yet. “They always have great food and great speakers,” said the cadet from Beaumont, Calif.

Looking around the ornate ballroom, Cdt. Park Eddy, a sophomore in the Marine option, Naval ROTC, beamed with Trojan pride. “Everybody in my family has gone to USC — grandparents, both parents. It was actually the only place I applied,” said the public policy and development major from Orange County, Calif.