David Petraeus, retired four-star general and former director of the CIA, spoke at the USC Marshall School of Business on March 27 about adapting military leadership skills to civilian organizations.

The Judge Widney Professor offered his perspective as part of a panel discussion organized by students of USC Marshall’s inaugural Master of Business for Veterans program.

Petraeus described the ideal leadership style as one that is adaptive and affirmative.

“You want to have a light hand on the reins, whenever possible, to promote initiative and independent action, while still providing clear guidance and direction,” he said. “Beyond that, as you progress in an organization, your leadership style has to change not just with your position, but also with those whom you are leading, always seeking to provide the specific style of leadership appropriate for each individual who directly reports to you and for the organization collectively.

He went on to outline what he called an “affirmative model of leadership” founded on an assumption that the vast majority of people want to do the best that they can.

Conveying this, he explained, “inspires those an individual leads to do just that, to do their best to ‘be all that they can be.’ It’s a style or approach that’s very conscious in conveying a respect for the individual,” he said, “and that conveys that the leader looks forward to confirming the excellence of those he is privileged to lead.”

After 37 years in the military and 14 months as CIA director, Petraeus, who holds a PhD from Princeton University, has taken on positions with a global financial firm, various academic posts (including his position at USC) and support for a number of veterans’ organizations. 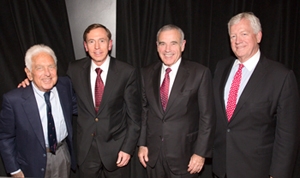 “I don’t care what organization you are in,” he noted, “that construct applies and it’s worth thinking about explicitly.”

The discussion was moderated by University Professor Warren Bennis. In addition to Petraeus, the panel included USC Marshall Dean James G. Ellis and Edward P. Roski Jr., chairman of the USC Board of Trustees.

The former CIA director impresses graduate students with his thorough knowledge of the issues affecting Mexico and China.

For Petraeus, leadership needs to be affirmative and adaptive