The USC Price School of Public Policy raised more than $128,000 in scholarship funds for its undergraduate veterans and ROTC reserve officers at a fundraising reception in Beverly Hills.

The event supported the school’s Learning to Excel Academically and Professionally Undergraduate Program — a multimillion-dollar initiative to expand resources for undergraduate students at USC Price.

“It is men like him whose heroism and bravery remind us of the service and the sacrifice that lie at the very heart of our democracy,” Nikias said.

In his remarks, Petraeus thanked the evening’s guests for their demonstrated support of veterans and ROTC students.

“No American was more privileged than I was to serve with our military men and women in the post-9/11 wars,” he said, “and so I thank you all for supporting those great Americans as generously as you have here tonight and as many of you have for a considerable number of years.” 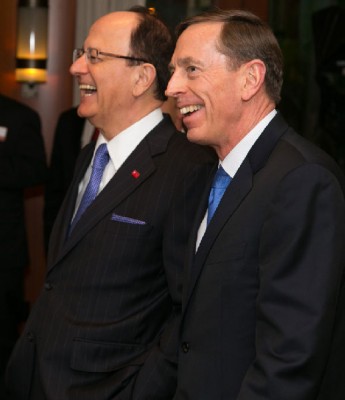 Each year, USC Price enrolls dozens of veterans and ROTC students who come to the school with advanced technical skills and leadership training that makes them uniquely qualified for careers in government administration, public policy and private industry.

USC Price Dean Jack H. Knott acknowledged the power of such educational programs to improve the quality of life for returning veterans.

“The gift of a USC education provides veterans with the skills and knowledge to live a purposeful and rewarding civilian life, and achieve their economic and personal goals,” he said.

While the U.S. Department of Veterans Affairs provides veterans with tuition benefits, these federal programs typically cover less than half the cost of a private university education.

Funds raised at the event help bridge this gap by providing scholarship funds that match federal tuition benefits, ensuring that cost does not prohibit veterans from pursuing an education at USC.

Knott noted the success of the school’s recent conference for returning veterans, held in October, and pledged to build upon the school’s work in this arena.

“We hope to carry on the momentum we’ve built already and strengthen our dedication to helping veterans, particularly those who are students at USC,” Knott said.