Fifty years after President Lyndon B. Johnson declared his War on Poverty, the issue remains an all-too-familiar part of American life.

The USC Sol Price Center for Social Innovation, in partnership with the USC Bedrosian Center on Governance and the Public Enterprise, gathered top urban policy scholars, think tank experts and leaders from the nonprofit and private sectors to look for new solutions to an age-old problem.

Titled “Innovating to End Urban Poverty,” the two-day conference, held on March 27-28, featured seven panel discussions and 30 speakers intent on resolving how to improve the quality of life for people and their communities.

“Poverty is one of the most enduring challenges that we have in this country, and it deserves the attention of everyone and the most creative thinking that everyone can bring to this,” said Raphael Bostic, director of the Bedrosian Center. “This conference is really designed as a focal point to get people to bring out their most creative thinking, to engage and be challenged, and to be forced to think about how things work, but more importantly how we’re going to change things going forward.”

Richard Parks, director of the Price Center, set the table for the discussion by laying out the harrowing figures. Since 1964, the number of people living in poverty has risen from 36.1 to 46.5 million. More than one out of five American children are growing up in poverty. California has the highest poverty rate in the nation at 24 percent, and Los Angeles County is the highest in California at 27 percent. About a third of the population experienced episodic poverty, defined as living in poverty for two or more consecutive months, in recent years. Income inequality is at its highest point since the 1920s.

Urban poverty is an issue that confronts the residents of many of the neighborhoods surrounding the University Park and Health Sciences campuses. 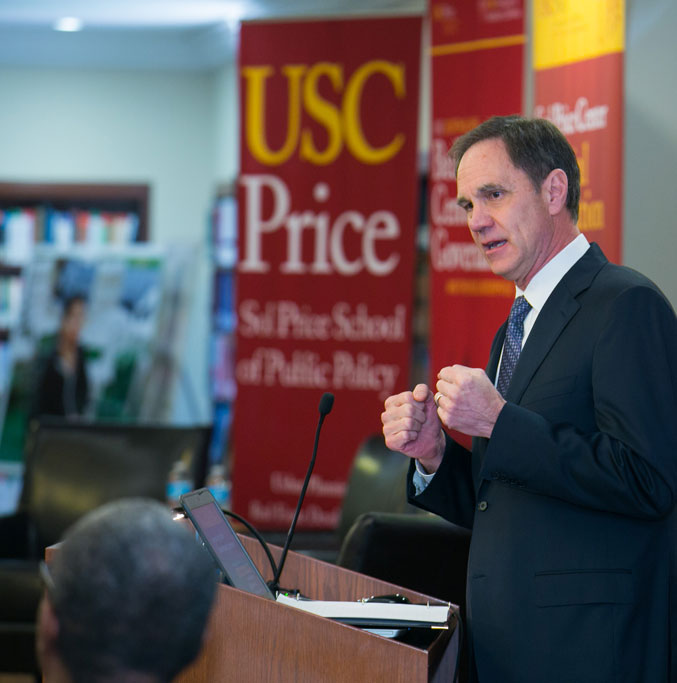 “This whole issue of poverty remains a major societal challenge that cries out for renewed and innovative public policy and societal attention, and is the basis for why I believe this conference is such an important event,” said Jack H. Knott, dean of the USC Price School of Public Policy, which houses the two research centers. “The best solutions to today’s poverty problem will necessarily require interdisciplinary and problem-focused approaches.”

At USC Price, those interdisciplinary approaches are taking place through research on low-income housing and homelessness, the influence of housing in neighborhoods on children’s schooling, food deserts and nutrition in urban neighborhoods, community economic development and access to quality health care, among many other issues. And through its partnership with Price Charities, USC Price applies these approaches in places such as City Heights, an ethnically diverse, working-class neighborhood in San Diego where Price Charities has focused its community revitalization efforts.

Displayed throughout the conference room were photographs of people in the City Heights neighborhood taken by Matt Gainer, director of the USC Digital Library and an adjunct faculty member at USC Price, to illustrate the real faces and stories of poverty.

“The strength of this country has been our ability to provide opportunity for people from all backgrounds, all income levels, to move into the middle class and into leadership positions,” said Elizabeth Garrett, USC provost and senior vice president for academic affairs. “If that does not continue in this country, that will be a fundamental change that will undermine the promise of America for the next generations of our children.” 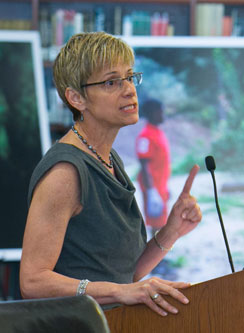 During the two-day event, several threats and challenges that need to be overcome in the fight against poverty were mentioned. Those included budget cuts and the federal deficit, the enormous inequality of income, poverty spreading into older suburbs, mass incarceration, the change in family structure to more one-parent households and the neighborhood distress that contributes to the persistence of poverty across generations.

Only 5 percent of families currently get all the benefits to which they are entitled.

“Paul Ryan, if you talk to him personally, is not some vicious guy who wants more poverty,” Greenstein said. “Ryan has to balance the budget in 10 years, and there’s trillions of dollars in deficit.  Many areas like Social Security can’t change.”

Greenstein noted that there are areas that Ryan does not want to touch, like military spending.

“If all those things are off the table, he has two places he can go — non-defense discretionary programs and low-income entitlements.”

There is substantial research that suggests the stigma of having a criminal record, the lost years and low level of education among the incarcerated have a significant negative impact on incomes. Parks noted that the estimated poverty rate would have decreased by 2.8 percent from 1980 to 2004 if mass incarceration had not occurred.

Kabira Stokes, a 2010 Master of Public Policy graduate from USC Price, started a company with the intention of giving jobs to people coming out of prison. She has made seven such hires for her Los Angeles-based company Isidore Electronics Recycling.

“At USC, I became interested in how I could help people coming out of the criminal justice system,” Stokes said. Rather than trying to promote job growth through policy development, she decided to “create jobs myself by convincing people to give me their electronic waste so I could put people to work recycling it.”

Manuel Pastor, director of USC’s Program for Environmental and Regional Equity and co-director of USC’s Center for the Study of Immigrant Integration, suggested that immigration reform could make the largest impact on improving poverty.

The poverty rate for foreign-born naturalized citizens is less than half of the rate for noncitizens. Even among full-time, year-round immigrant workers, 24.2 percent were below the poverty rate in 2009.

Ed Olsen from the University of Virginia suggested shifting low-income housing policy from unit-based to tenant-based assistance, giving tenants portable vouchers to force owners to compete for their business.

“We should leave the job of getting value for the money spent to the people who have the greatest incentive to do it, namely the recipients of housing assistance,” Olsen said.

As the event concluded, Bostic expressed his hope that the papers and discussions emanating from the conference would lead to concrete, positive results.

“There are lots of things we can lift up,” he said. “Part of our challenge moving forward is to distill this down into something that is clear, transparent and actionable.”

Many residents are struggling with basics like housing, health care, food and education. The USC Dornsife-Union Bank LABarometer report brings new data to an old problem: accessibility and affordability of essentials.

‘How Poverty Affects Human Rights’ was the theme of this year’s All School Day event at USC.

Students get a fresh outlook on health care by visiting the Downtown Women’s Center as part of a weeklong USC initiative.