When Matthew Boone ’81 showed daughter Emily a photo of himself receiving one of USC’s first community service awards in the late 1970s, her reaction was direct.

“You had a perm in those days?”

Without that hair, which was popular in the 1970s, his wife — also a USC student at the time — would have never gone out with him, he countered.

Stylistic concerns aside, the interaction uncovered a previously unknown link between father and daughter, since Emily, a junior at the USC Price School of Public Policy, recently began volunteering herself through the Joint Educational Project (JEP) based at the USC Dornsife College of Letters, Arts and Sciences.

“JEP certainly affected my life, but I had never really shared my experiences [about it] with Emily before,” Boone said. “But when she happened to remark that she was doing JEP this semester, I made the connection and whipped out that photo to show her.”

For Boone, who graduated from USC Dornsife with a bachelor’s in biological sciences, his associations with JEP came during the earlier years of the organization. JEP was founded by Barbara Gardner in 1972 to foster intellectual connections between students’ community service and what they studied in their classrooms. JEP currently is one of the oldest and largest service-learning programs in the country.

JEP was less structured and still somewhat undeveloped in the late ’70s, said Boone, an enthusiastic participant in the program, particularly during his junior and senior years. Now executive medical director of the Edinger Medical Group in Orange County, Calif., as a JEP volunteer he recalls talking with local elementary school children, who were severely obese, about the importance of diet and exercise. He also spent many hours tutoring students at John Adams Middle School. 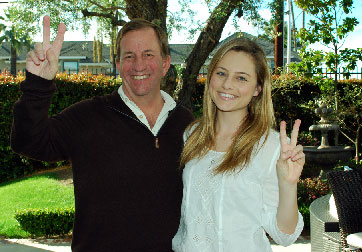 Matthew Boone and his daughter, Emily, share the experience of participating in JEP while at USC.

“I was pretty active in JEP, which was uncommon back then,” Boone said. “This was in the context of the late 1970s, when there was a good deal of conflict between the university and the surrounding neighborhoods. JEP was one of the first steps the university took to demonstrate that it cared about the community and its welfare.

“Maybe now it would be taken for granted since there are so many outreach programs these days,” he added, “but back then it was still a bit unheard of.”

He recalled that the community service awards were conceived in the spirit of a newfound commitment to neighborhood involvement and to encourage volunteerism. 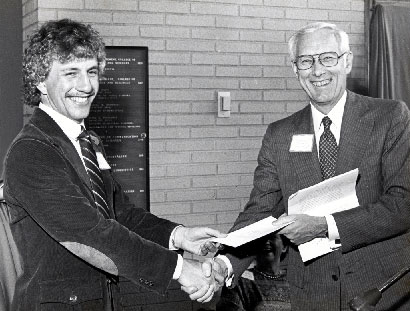 “It gave me exposure to a population of kids who, culturally, I had never worked with before. One thing about medicine is that you’re dealing with people from different backgrounds, socioeconomic status, ethnicity, everything. My volunteer work gave me some enlightenment about the world as it really was, outside the USC bubble. It engaged me into appreciating and understanding diversity.”

Finding time for others

Emily Boone was a two-time All American in lacrosse who entered USC on an athletic scholarship. Even without hearing about JEP from her father, she had always known about and been interested in the organization. But amid her extensive practice schedules, finding the time to participate was difficult.

Now a junior and no longer playing lacrosse, she took advantage of her newfound availability and began volunteering for JEP as an extension of her “American Experience” history class. Each week, a “mini-team” made up of Emily and a couple of her classmates teach American history to fourth and fifth graders at Vermont Avenue Elementary School, one of the USC Family of Schools.

“Our mini-team generates lesson plans in advance, as well as age-appropriate activities related to the lessons,” she said. “The activities are so much fun for the kids and they get so excited. It’s refreshing to experience that excitement in your day — sometimes you get so bogged down by school and work, it’s nice to get a different perspective.”

Emily appreciates the continuation of this tradition from her father’s generation to her own and hopes that one day it might even extend to a third.

“If I have kids one day, I’d definitely tell them, ‘your grandpa did JEP, Mom did it and you should, too.’ At USC you don’t always get the chance to explore the surrounding community, and JEP is a good way to do so and give back in a fun, lighthearted way. I would definitely encourage my kids to participate and keep the cycle going.”

USC Dornsife alum Mahmood Sariolghalam is a scholar and specialist in Middle East politics as well as Iranian foreign policy and political culture.

When Bonnie Nadzam PhD ’11 began to develop characters for her dissertation in the Ph.D. in Literature and Creative Writing program at the USC Dornsife College of Letters, Arts and Sciences, she could not have predicted the shape they would eventually take.